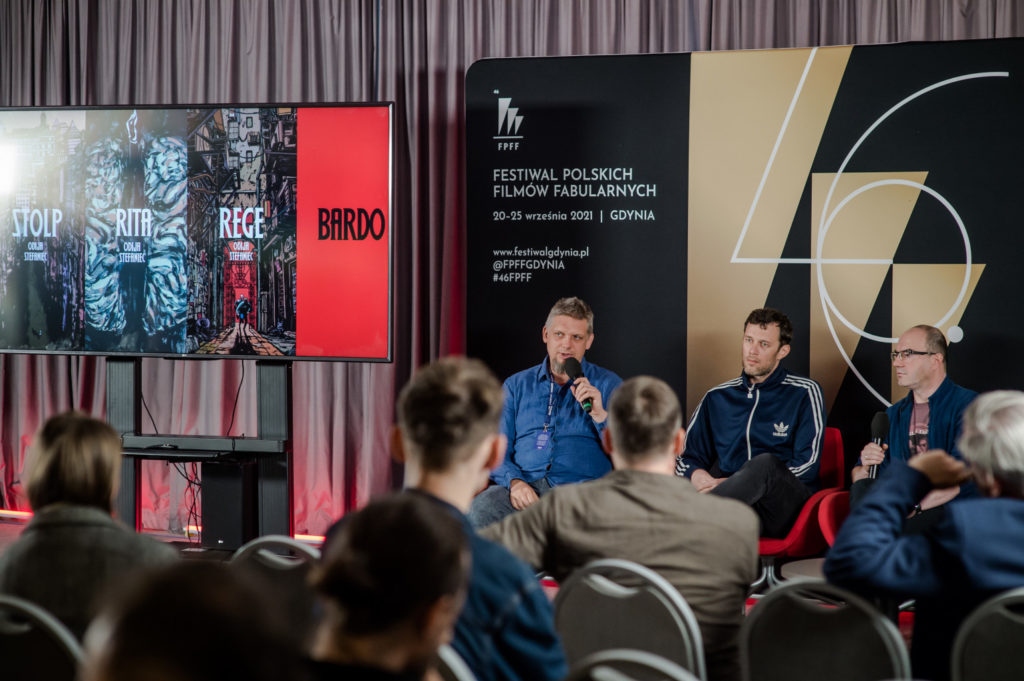 Second day of industry events focuses on an extraordinarily rich and complex world of graphic novels. Creators and publishers of ten of such novels took part in the comic books pitching at the Polish Film Festival in Gdynia. It is possible that in the years to come, you will be able to see some of them as film adaptations during the festival screenings.

The Festival’s guests were greeted by graphic novel enthusiasts: artistic director of the Festival Tomasz Kolankiewicz and journalist Katarzyna Borowiecka, who hosted the pitching.

The first presented novel was Syn, an ongoing comic book series created by Benedykt Szneider, who was supported by Szymon Holcman’s publisher (Kultura Gniewu).  Szneider – comic book artist and illustrator – works also as a creative director in the video game industry, where comic book devices work very well. The artist believes that such combination is an example of power that lies within comic books and narrative created by their authors. Presented during the pitching, Syn would convince any sceptics.

Szneider, as he himself claims, is interested in creating complex, multi-dimensional worlds, into which the reader, the viewer, the player, is brought by the main hero.In case of the presented comic book, it is the nameless titular son, who was expelled from the torture academy, where he exercised withstanding increasing amounts of pain. On his way, he meets Iskierka and Babcia, descendants of the extinct Popioły people. When the Syn is mistaken for the descendant of a legendary ruler of Popioły – Kagan, he becomes a target of the hunt organised by the new and cruel authorities. The entire story takes place in a fictional world inspired by medieval Poland and Europe.  Szneider presented rich visual material and a short animated fragment of the film. 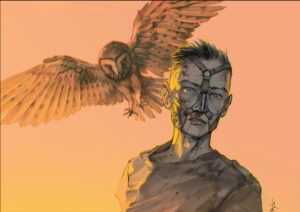 PRL the eternal spell, and a weird family

The second presented comic book was Yorgi by Dariusz Rzontkowski and Jerzy Ozga, also published by Kultura Gniewu. The former of the creators briefly presented an amazing plot, meandering between genres, which has Poland in the times of PRL and the era of Gierek at the beginning of 80s in the background. The hero of the story is Jerzy Cieślik, who, after losing his beloved wife, is on a downward spiral. One day, he finds a watch that belonged to his deceased wife, which leads him to discover a conspiracy and meet figures like Adam Słodowy, Stanisław Lem or Philip K. Dick. During the summary, Rzontkowski compared the atmosphere of Yorgi to films like Hydro-puzzle by Andrzej Kondratiuk and Teddy Bear by Stanisław Bareja. 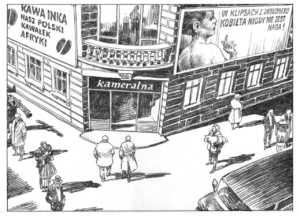 Michał Śledziński and his Wartości rodzinne (pub. Kultura Gniewu) was the hero of the third presentation.As the artist said, the topic of the story about the Król family is being overprotective, and its genre is spy family comedy, or “inter-genre mish-mash”. Śledziński presented the main characters of Wartości rodzinne – the not terribly bright Edgar, his wife Elżbieta – a bored lady of the house, who, in due time, changes into a female version of Rambo, and their children, Tara and Tobiasz, who are doing considerably better in the teenage reality. In this story, the key role is played by Pan J. – an individual who cannot find his place in the reality and has the ability to turn water into wine. Śledziński emphasised that he is inspired by series like The Simpsons and Family Guy, but he would like to make a film like Spielberg’s E.T. 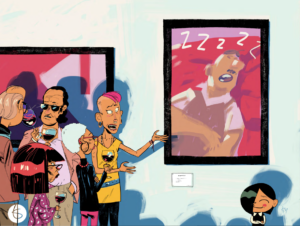 An intimate story told in pictures

Poczwarki  by Gosia Kulik (pub. Kultura Gniewu) is the fourth of the presented comic books. Its characters are teenagers, and at the same time,radically different personalities – Lucjan and Nadieżdża. The former becomes a religious fanatic and bullies the school’s religion teacher, who he thinks is just an imposter and the embodiment of hypocrisy. The latter, radically rational Nadia,ridicules priest’s teachings with the power of reason. This girl is a typical outsider – rebellious, but also shoved to the side of the class by her mediocre knowledge of the Polish language. Poczwarki is – in the words of Szymon Holcman, who is also a film expert – a serious comic book vigilantly observing hot topics. One of the reviews describes it as “annoying and wonderful at the same time”. What is interesting is also the form of Poczwarki, told without the traditional division into frames, enclosed in a narration between school, pool, and church. If it was a film, it would be a combination of Sex Education and Twin Peaks. 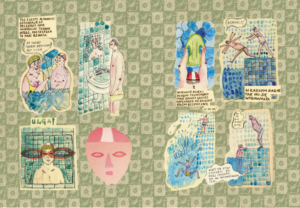 Fugazi  by Marcin Podolec – comic book artist, as well as animated films director,was another one of the comic books presented during the comic book pitching. Fugazi is the name of a legendary music club in Warsaw, where Hey, Acid Drinkers and Robert Brylewski performed, and the concerts were announced by none other than Jerzy Owsiak, before he got The Great Orchestra of Christmas Aid started. In short – it is an iconic place (portrayed also in a documentary by Leszek Gnoiński, Fugazi – The Centre of the Universe). The comic book shows the legend of this venue, but also the dark side of the 90s– the drug epidemic and the mafia extorting protection money. Comic book Fugazi made a career not only on the Polish publishing market, but its rights were also sold to Germany, France, and Italy, which made it possible for Marcin Podolec to make an international career. 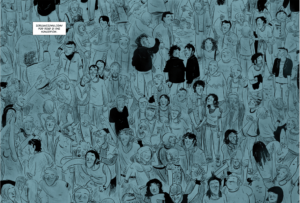 The Future is a Nightmare

Bardo, a joint work in three volumes, created by Daniel Odija and Wojtek Stefaniec, published by Timoficisiwspólnicy, successfully convinced us that comic books are close to hot topics and tell them through the genre’s devices. In Buddhism, Bardois a state between death and a new life; in the comic book, it is a nightmarish, boundless city, which, after the ecological catastrophe, is waiting to die out – it is because no children are born into the world anymore. The city is ruled by a dictator from house Szczurak, and the gray eminence is doctor Mind, who is experimenting on people. The protagonist of the story is Stolp, who is trying to find his wife and children, and in order to do this, he makes a vague deal with the city’s dark forces.

The authors presenting Bardo would love to see it made into a format of live-action mini-series, but they also consider the genre of animation. Bardo is a dense cyber- and steam-punk anti-utopia, which – according to Daniel Odija – is also a socio-political story slightly similar to Shakespeare’s dramas. 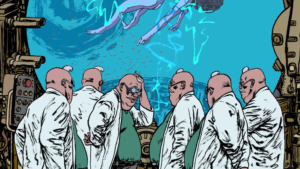 A different proposition was presented by Jakub Topor (pub. Timof i cisi wspólnicy, represented by Paweł Timofiejuk), author of the album Rodacy in three parts. After a short but expressive clip pairing drawings with politicians’ speeches, he stated that the heroes of his stories are horrible, apathetic, and abandon their pets, but also have the power to make the readers fall in love with them, because they are fascinating, colourful, and ambiguous. Topor mentioned that each volume has a different hero, and in the third one the main characters are animals. In its form, film adaptation of Rodacy could be reminiscent of Szczepan i Irenka by Janek Koza, produced for Canal+, or it could apply the mockumentary convention 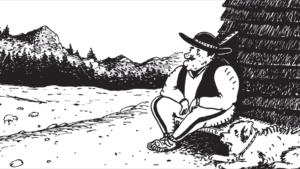 The eight project was presented by publisher Szymon Holcman. The heroes of Czarna studnia are miners and a citizen from Warsaw, who meet during the night at the titular well. Each of them brings a different story intertwined with history, culture and folklore of Upper Silesia and the everyday life of the miners.The hero from Warsaw has his own story to tell too, and it is a story deeply steeped in mysticism. Each story has a different colour palette, suited to its style and tone. In Czarna Studnia you can clearly see fascination with not only folklore, but also the art of story, conveyed by word of mouth from generation to generation. The comic book’s author, Igor Jarek, is also a famous poet and prose writer, whose published set of novelettes Halny has recently created a great stir. 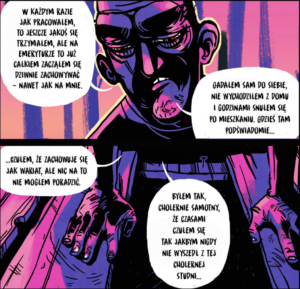 Pan Żarówka  by Wojtek Wawszczyk – a 624 pages-long story about growing up and working through difficult emotions with metaphors and fables – was another one of the presented graphic novels. The main hero of this story is a boy, who, as a result of an accident, swallows a heated piece of metal and starts to shine like a light bulb. His parents also undergo weird transformations – his mother breaks in half, and his father becomes flat as a pancake. As emphasised by Wawszczyk, his comic book talks about acceptance, tells the stories of first heartbreaks, and portrays difficult times of the end of PRL and the system’s transformation. Pan Żarówka is also the first Polish comic book bought by the legendary publisher Fantagraphics. The English version, translated by Antonia Lloyd-Jones, will hit the market next year. Wawszczyk, who has most of the rights to a film adaptation, would prefer to see Pan…in a live-action film, because then it could be a film directed in the style of Charlie Kaufman or Bong Joon-ho. The animated version could be inspired by I Lost My Body by Jéremy Clapia. 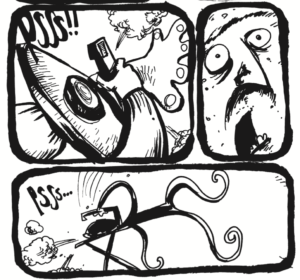 The last one of the presented comic books was Totalnienie nostalgia by Jacek Frąś and Wanda Hagedorn. Pitch was presented by the former of the artists and a publisher Szymon Holcman, who emphasised that this story is totally unfilmable, and the genre of film diary is still largely popular in the cinema. Totalnie nie nostalgia is a three-part story about a young Wanda, who is growing up and entering adulthood, with changing chapters of PRL in the background. Every chapter has a different style and topic, and there is also a lot of metaphors, which opens up a possibility for a rich and multi-threaded film. Holcman emphasised that even though this story is a very personal story of the author, thanks to the brilliant comic book narration it was turned into a universal story. Jacek Frąś appealed to create a national institute that would financially support comic book projects, which are currently created from the heart’s will and are not expected to bring any financial compensation. These words were obviously met with applause from numerous creators, publishers and graphic novel enthusiasts gathered in the hall. 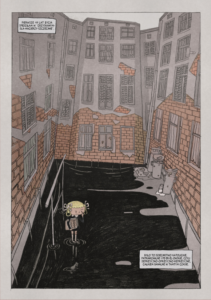 The pitching was followed by a short presentation by Platige Image hosted by Adam Korpak, who emphasised that the studio’s mission is to turn imagination into storytelling. The change in form from a graphic novel into film or series – as he said – offers the chance to reach even more viewers. Currently, Platige Image is producing a film adaptation of Halny by Igor Jarek, directed by Kordian Kądziela. At the end, Adam Korpak presented the studio’s reel, which showcasedmajor productions like Paths of Hate, Another Day of Life (film won an award atthe European Film Awards) and a fragment of Wonder Woman, for which Platige Image created the intro. The details can be found in the studio’s attached presentation.

Wednesday, the third day of Gdynia Industry, will focus on ethics and good practices in the film industry. We would like to invite you to the Omega Hall in the Mercure Hotel in Gdynia between 10:30a.m. – 1:00 p.m.

The report was prepared by Ola Salwa