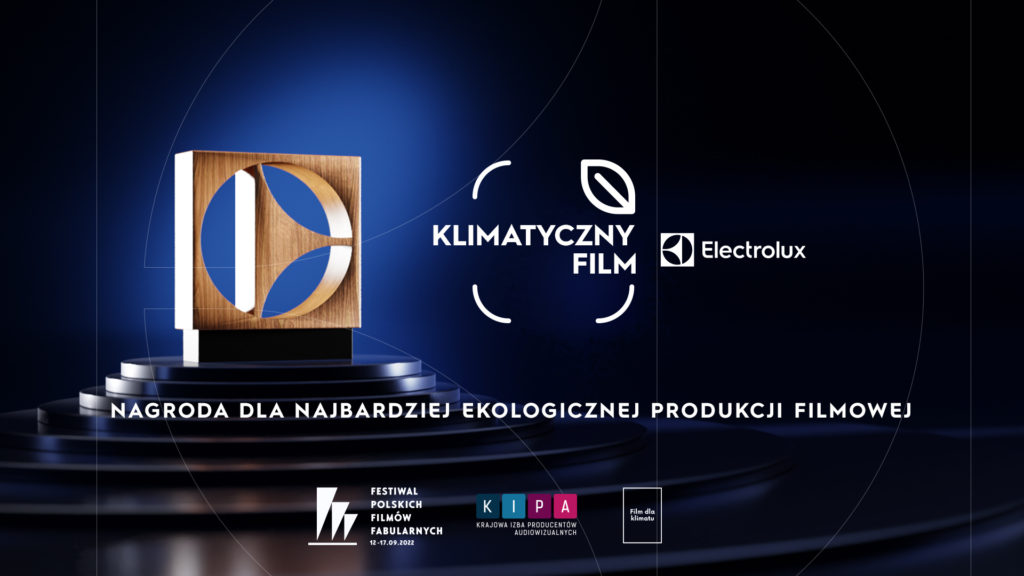 “Atmospheric Film” is an award initiated and founded by Electrolux, the Main Partner of the 47th Polish Film Festival in Gdynia. Granted this year for the first time, the award is to distinguish the most eco-friendly production and draw attention to the issue of the excess volumes of waste and the carbon footprint produced by the audiovisual sector. “Atmospheric Film” award is a tribute to the filmmakers and producers who are not indifferent to the destiny of our planet’s future.
Submission of applications begins on 10th August.

The winners, announced during the Young Gala of the 47th PFF in Gdynia, will receive a statuette and a financial award in the amount of PLN 15,000.

Polish Film Festival in Gdynia pays great attention to green production – in terms of film production, as well as the production of our event. For two years now, as part of Gdynia Industry, we’ve organised events related to green filming – this year, in the form of the international conference on planet placement. The Festival, as well as the Gdynia Film Centre aim, through their actions, at the biggest possible reduction in carbon footprint, as we believe we should start education and changes from ourselves – said Tomasz Kolankiewicz, the Artistic Director of the Festival – I hope that the competition and the “Atmospheric Film” award will help to speed up changes and effectively promote the idea of green production.

We decided to initiate and fund the “Atmospheric Film” award as we would like to acknowledge the efforts made by all Polish film crew undertaking bigger or smaller actions for the benefit of ecological production. Filmmakers are opinion leaders, therefore, we believe that granting the award at the 47th Polish Film Festival in Gdynia, we make the issue more visible and we stress its importance to public space. The award is to inspire and demonstrate that through joint efforts, we can make an environmentally friendly world – summed up Natalia Kostera, Electrolux Polska Brand Manager.

As Monika Głowacka, vice-president of the Polish Audiovisual Producers Chamber of Commerce, the award’s substantive partner, said: Polish Audiovisual Producers Chamber of Commerce (KIPA), one of the largest independent business organisations in Poland,  for two years now, has been promoting the idea of sustainable audiovisual production, the so-called green filming, by conscious production of audiovisual works in the most environmentally friendly way. To this end, it has engaged, among other things, in the implementation of two projects: the development of the “Green Guide for the Audiovisual Industry” along with an original programme of environmental workshops, and the organisation of a series of training courses entitled “Green Audiovisual Production Laboratory”. The activities undertaken are intended to enable the realisation of goals related to reducing environmental impact, leading, in the long run, to energy efficiency, climate neutrality and implementation of green technologies in our sector. We are very enthusiastic about the initiative to create the “Atmospheric Film” award, treating it as a culmination and appreciation of the efforts made by film crews to protect our environment and to widely promote the idea of green filming.

Last year, the “Film for Climate” sustainable production initiative at the Polish Audiovisual Producers Chamber of Commerce,  initiated by a manifesto signed at the 46th Polish Film Festival in Gdynia, has been launched. The manifesto was the first step towards starting the process of change in the Polish audiovisual sector.

In early September, the Competition Committee will select productions that are particularly outstanding in their environmental efforts. During their deliberations, the judges will review the submitted sustainable production plan and the environmental measures taken. They will pay attention to the efforts made by the teams and the ingenuity and efficiency of the solutions in areas such as energy consumption, use of lower carbon footprint transportation, management of materials in terms of decoration and circular fashion, location planning, catering and waste management, among others.

The substantive partner of the “Climate Film” award is the Polish Audiovisual Producers Chamber of Commerce, and the supporting partner is the Film for Climate initiative.

The 47th Polish Film Festival will take place between  12th and 17th September 2022.