Welcome to our story. GDYNIA FOR CHILDREN at the 46th PFF 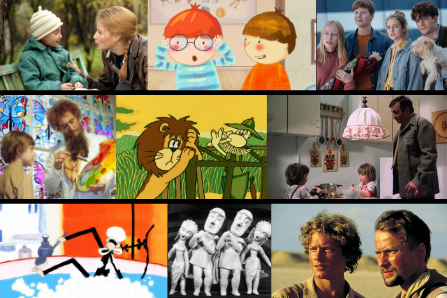 One of the most popular and oldest sections of the Polish Film Festival is Gdynia for Children, organised by the Polish Filmmakers Association, in co-operation with the Pomeranian Film Foundation. The theme of this year’s, already 17th, edition the section is music, and the programme includes over twenty short animations and a few feature-length films for children.

Screenings for the youngest audience of the 46th PFF will be held on the Chamber Stage of Musical Theatre. Detailed programme of the Gdynia for Children screenings, dedicated to organised groups, kindergarten and the youngest students of primary schools, is available on Festival website HERE. By reservation only.

A commentary to this year’s edition of Gdynia for Children section, accompanied by the phrase “Welcome to Our Tale”, was given by a journalist and film critic, member of the Polish Filmmakers Association, Jerzy Armata:

– This year’s edition of Gdynia for Children section will be full of music, and the leading roles will be played by film composers – Andrzej Korzyński (Mr. Blot’s Academy), Krzesimir Dębski (In Desert And Wilderness) and Michał Lorenc (Ptaszka). They will be presented in the company of Rex, the Composer, the famous A Little Quartet under the baton of the late Jerzy “Duduś” Matuszkiewicz and Bulandra and the Devil quarrelling to the rhythm of Krzysztof Penderecki’s music, among others.

Polish films, also those dedicated to young viewers, have always been associated with prominent composers, not only of classical music but also jazz, rock and pop. The programme of this year’s edition of Gdynia for Children will present films with music by Krzysztof Panderecki, Jerzy “Duduś” Matuszkiewicz, Waldemar Kazanecki, Czesław Niemen, Marek Wilczyński, Andrzej Sikorowski, among others. With the masters trio: Krzesimir Dębski, Michał Lorenc and Andrzej Korzyński in the leading roles.

Dębski is a true Renaissance man composing both classical music and all sorts of modern genera, like jazz, pop, rock or even sung poetry. This unconventional figure, starting with his name, writes, arranges, conducts, plays the violin, produces, records and concerts. The story has it that his parents waited six months for the Council of State to approve his name (the composer still has in his private archive the written approval to use it signed by Prime Minister Józef Cyrankiewicz). Dębski is notorious for… unusual behaviour. One day, he abandoned the piano and climbed Kilimanjaro… Gdynia for Children is an opportunity to listen to his score for Gavin Hood’s adaptation of Sienkiewicz’s novel, In Desert and Wilderness (2001).

Lorenc, exceptionally successful in combining symphonies with ethno sounds, creates extremely expressive music full of emotions, often strictly rhythmical and grounded in suggestive melodic motifs. This hard-working and versatile composer collaborates not only with Polish artists but also with filmmakers from the Czech Republic, United Kingdom and the USA. When he’s not composing, he writes… children’s books. During Gdynia for Children, you can hear Lorenc’s music in Krystyna Krupska-Wysocka’s Ptaszka (1996), a compelling story about a lonely man struggling to take care of his three children and keep his daytime job.

Korzyński is doubtlessly one of the most versatile and hard-working composers. Apart from songs, he also writes instrumental, ballet, radio, film and theatre music. There are over a hundred and twenty titles to his credit. Nearly fifty films and TV series feature his songs. Korzyński’s soundtrack to Krzysztof Gradowski’s Mr Blot’s Academy (1983), with such hits as Witajcie w naszej bajce [Welcome to Our Story], Kaczka dziwaczka [The Eccentric Duck] and Na wyspach Bergamutach [On the Bergamuty Islands], is the most popular record with Polish film music. You can hear it during this year’s Gdynia for Children. We will also screen Gradowski’s more recent film with Korzyński’s music, Mr Blot’s Triumph (2001).

The films selected for this year’s review have one thing in common: a huge load of positive energy we all so desperately need in these tough, pandemic days. But there’s a tint of sadness as well. In recent months, two masters of young cinema passed away. Last year, on 9th June, we lost Krystyna Krupska-Wysocka, the director of unforgettable Skutki noszenia kapelusza w maju [Consequences of Wearing a Hat in May] and Żuraw i czapla [Crane and Heron]. A year later, on 22nd June, died Krzysztof Gradowski, the father of filmic Mr Blot. Their legacy brought them many prestigious awards, but above all, the love of the young and older audience. Thus, we would like to invite you to Mrs Krupska-Wysocka and Mr Gradowski’s Academy:

“Welcome to our story / The smile is mandatory / When Pinocchio sings a song / The trees will dance along / Let us lift your moods / Let’s go into the woods / Through the oaks and pines with a merry gait / Where adventures await…”.

Gdynia for Children is organised by the Polish Filmmakers Association, in co-operation with the Pomeranian Film Foundation. The programme is co-financed by the Polish Film Institute. The Honorary Patron of the review is UNICEF Poland – a humanitarian organisation working for children.