“A Short Film About Legality” – a competition for a spot 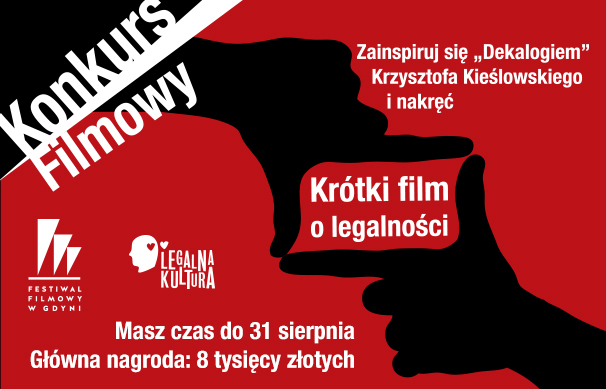 The Legal Culture Foundation in cooperation with the Gdynia Film Festival announce another edition of the Competition for a spot promoting the use of legal sources of culture and transferring the ethical principles of everyday social relations into the digital reality.

This year, 20 years will pass since the death of one of the greatest Polish film directors – Krzysztof Kieślowski. This unrivalled creator of documentaries and feature films all his life had been seeking anwers to fundamental questions, trying to show to his students how to be honest with regard to the film, the viewer and the film protagonists.

Today, the social life very much lacks such conduct. This crisis of values is also visible in culture. In the digital reality, the rule of the stronger one still prevails, and ethics and openness to the second man are deficient. Despite common access to the Internet, we still struggle with fundamental problems in the net, such as cheating, stealing or hate speech.

Hence, referring to Kieślowski’s legacy, with his “The Decalogue” at the lead, we would like to encourage the Internet users do tackle the topic of transferring the moral standards of the real world to the net. Let us try to jointly show that honesty is a foundation on which also the virtual reality must be built. That in the Internet, just like in everyday life, it is worth being fair to others.

BE INSPIRED BY KRZYSZTOF KIEŚLOWSKI’S “THE DECALOGUE” and make:
“A SHORT FILM ABOUT LEGALITY”

Get involved in the topic and make a film with a message! Take part in the Legal Culture Special Award Competition and watch your piece of work during the Gdynia Film Festival, at the same time becoming one of the filmmakers. It is not only prestige but also a voice in the fight against piracy, so important to artists and thus, to you.

You have one minute of screening time for that. Contrary to what it may seem, it is a lot of time. This is how long the film “Leaving the Lumière Factory” by the Lumiere brothers lasted. In 1895, that film initiated the history of the cinema.

The final of the “Short Film About Legality” competition will be held during the 41st Gdynia Film Festival (19-24 September 2016).

The works submitted will be assessed by the jury of the Young Cinema Competition of the 41st Gdynia Film Festival. The jury will grant the following awards:

The films, of an authorship nature, can be submitted by natural or legal persons, as well as by teams of creators. Copyrights of the films should not by any means by limited, nor should they breach copyrights and personal goods of third persons. All the materials used in the film – music, films, cinematography, books, illustrations, games, etc. – must come from legal sources.

The deadline for submitting the films is 31st August 2016. The results of the competition will be announced during the Young Gala in the Musical Theatre in Gdynia on 23rd September 2016.

In the competition films, makers can use the logo of Legal Culture and other materials available in the Press Office of the Legal Culture Foundation.

Detailed substantial assumptions of the competition, the mode of submitting the works, technical requirements have been included in the Rules and Regulations of the Competition.

Rules and Regulations of the “A Short Film About Legality” Competition

Declaration of honour of the competition participant PDF

Source: press materials of the organizer