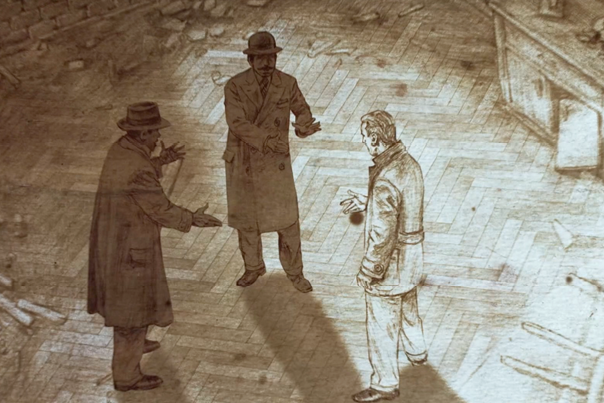 During the 40th Gdynia Film Festival, there will be a special screening of a documentary by Sławomir Grünberg entitled “Karski and The Lords of Humanity”, produced by Apple Film Production and LOG TV in co-production with Telewizja Polska S.A., the National Culture Centre and the National Audiovisual Fund, Tv Indie and Fundacja Przeszłość -Teraźniejszość.

Created in a new formula that reconciles unique archival materials and animated sections, the film by an outstanding documentarist, the prizewinner of the prestigious EMMY award, will be presented at a special screening connected with a meeting with the filmmakers on Thursday 17th September 2015 at 1.30 PM in Multikino in Gdynia.

Jan Karski, aka “Witold”, was the first man in the world to disclose to the Western coalition countries the cruelty and mass murders of the Nazi Germans on the territory of Poland. He was the emissary of the Polish Underground State who was secretly sent to the Warsaw ghetto to recognize the situation of the Jews on the eve of the “final solution”. His aim was to break the news to the world of the devastating information about the tragedy of the Jewish nation.

“Unless the Allies intervene, the Jewish nation will cease to exist within half a year,” he reported in the so-called “Karski’s Report” based mainly on the knowledge gained by Jan Karski as the eye witness. Unfortunately, information about the Holocaust, “smuggled” by Karski to the West, was published on the 16th page of “New York Times”. A few years ago, “Newsweek” recognized Karski as one of the most outstanding characters and described his mission as one of the moral milestones of the twentieth century civilisation. Karski is a universal figure that should become a paragon of virtue for the young generation throughout the world. Young people search for the sense of life and proper moral examples by nature, and “Karski and the Lords of Humanity” shows that it is sometimes worth asking oneself the trivially sounding question: As an individual, am I able to change the world?, Sławomir Grünberg adds.

The unquestionable value of Sławomir Grünberg’s film lies in the animated reconstructions of many scenes, such as the imprisonment of Karski by the Gestapo, his double entering of the Warsaw ghetto and of the temporary camp in Izbica as well as numerous talks with – as Karski himself called them – “the lords of humanity”, among others, the Minister of Foreign Affairs of the United Kingdom Anthony Eden or the President of the USA Franklin D. Roosevelt. Among the archival materials, never used before interviews held by E. Thomas Wood, the co-author of the book “Karski – the story of the emissary” as well as less known film and photographical materials are shown.

In the film, apart from recordings of the very Jan Karski, the viewers will have the opportunity to familiarise themselves with statements of people who knew him very well, including the famous American political scientist, professor Zbigniew Brzeziński, the official biographer of Winston Churchill, sir Martin Gilbert and the former Minister of Foreign Affairs, professor Władysław Bartoszewski.

The official premiere of the film “Karski and the Lords of Humanity”, met with a standing applause, was held on the eve of the 101st anniversary of Jan Karski’s birthday, 23rd April this year, in the POLIN Museum of the History of the Polish Jews. The film entered regular Polish cinema distribution on 24th April, exactly on the 101st anniversary of Jan Karski’s birthday, receiving great reviews of the critics and popularity among the viewers.

The first screening of the film abroad was the official closed screening in Jerusalem related to the 25th anniversary of the renewal of the Polish-Israel relations, prepared in cooperation with Yad Vashem and the World Jews Congress. The screening was the implementation of the promise made by the head of the Polish diplomacy during the Polish premiere of the film in April in the Museum of the Polish Jews in Warsaw, who said then that the Ministry of the Foreign Affairs will promote the film KARSKI AND THE LORDS OF HUMANITY abroad by preparing special screenings in the diplomatic institutions and Polish Institutes. “This is an element of the historical policy that we want to implement together with the National Memory Institute. We want to show the real history of the hardship of WWII,” the Minister said back then. In this way, Poland wants to promote the positive image of Poles from the time of WWII and to fight against phrases like “Polish death camps”. This is a symbolic figure and a symbolic film, worth presenting throughout the world.