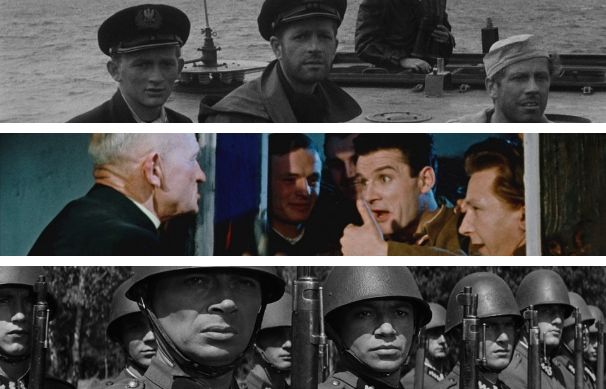 “Westerplatte”, “Lotna”, “The Eagle” – films by Stanisław Różewicz, Andrzej Wajda and Leopold Buczkowski will be shown in Gdynia during the 44th Polish Film Festival, which will thus record the 80th anniversary of the outbreak of World War II.

(…) Here the first shots of World War II were fired – a telling sentence from the opening scene of “Westerplatte”, a film directed by Stanisław Różewicz from 1967. The war drama, based on the screenplay by Jan Józef Szczepański, is considered by critics to be one of the greatest Polish films about the war.

Action of “Lotna” takes place during the September campaign in 1939. The title “Lotna” is the name of the horse accompanying the squadron of Polish lancers. The film by Andrzej Wajda from 1959 is an adaptation of Wojciech Żukrowski’s short story published in a Polish monthly literary journal “Twórczość” (No. 2/1945) and then in the collection of short stories “Z kraju milczenia” (“From the Country of Silence”) in 1946. The writer himself appeared in the film, as a soldier resting in the stable, with one line to say.

The festival screening of the film “The Eagle” (Orzeł) from 1958, directed by Leopold Buczkowski, will be preceded by an introduction prepared by the Museum of the Polish Navy in Gdynia. The presentation will show the backstage of the film with an indication of how far the film remains faithful to historical facts. Film frames, archival photographs and documents will be used. There will also be some museal elements – the Museum’s collection includes relics related to “Orzeł”, including an officer’s saber and combat decorations of the ship’s commander, Jan Grudziński. The museum also exhibits cannons from “Sęp” (Vulture in Polish) submarine, the twin ship of “Orzeł”, which “starred” in the film.

Film screenings from the section commemorating the 80th anniversary of the outbreak of World War II will take place in the auditorium of the the Museum of the Polish Navy.