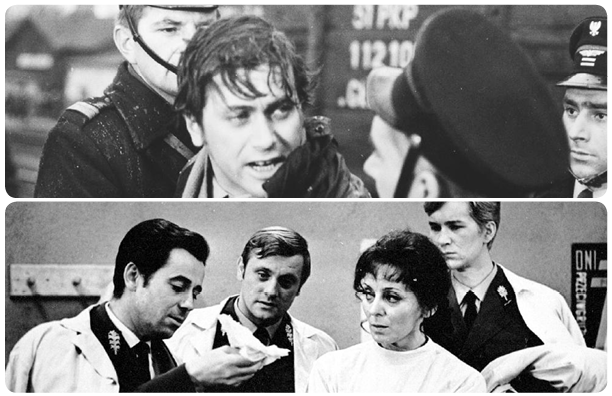 Code Name Murder – a review of the Polish militia films is a third, after “Lost in Space” (Polish forgotten science-fiction films) and last year’s “The Archives of Horror” (Polish horror films), review of the Polish genre cinema, both presented at the Gdynia Film Festival and broadcast on the TVP Kultura channel. This year’s section includes three titles: “The Criminal Who Stole the Crime” by Janusz Majewski, recognized as the most important achievement of the genre, “Cat Paw Prints” by Paweł Komorowski and “Golden Wheel Street” by Stanisław Wohl. As television films, they are rarely included even in the film genre juxtapositions. TVP Kultura encourages to watch the whole ten-episode review in the autumn weekends.

The militia films form a currently-forgotten, peculiarly Polish variety of detective films, established in the Polish People’s Republic in the 60s and 70s. The variety sprung up in a straight line from the militia novel, whilst at the base of it we can undoubtedly find the legendary “Cobra” Detective Theatre (Teatr Sensacji “Kobra”): one of the most popular television programmes of the 50s and 60s, broadcast live during Thursday evenings from the Warsaw studio located at Plac Powstańców. The films belonging to the militia cinema trend were a tool of the then authorities for improving the image of the Citizen’s Militia, inciting the sense of trust in the agents and promoting their infallibility. The vast majority of the films are unsuccessful, in the terms of the film art, bouquets for the Citizen’s Militia, uncomfortably torn between the classic detective film and the propaganda film. A part of them, however, pass the test of time very well, mainly thanks to brilliant directors: Stanisław Bareja (his “The Touch of the Night” of 1961 initiated the whole trend), Janusz Majewski, Janusz Nasfeter, Stanisław Wohl, Aleksander Ścibór-Rylski, Leon Jannota, Ryszard Ber, and a few others. After the half of a century since their premieres, those films have lost their propaganda features, giving way for us to enjoy interesting roles of the most outstanding Polish actors including Janusz Gajos, Tadeusz Janczar and Zygmunt Hübner; good techniques of the directors; and interesting detective puzzles. An additional, unintended comic element of the films is constituted by naive but shown as revolutionary detective methods, such as samples of an orthalon fabric shown to the witnesses or artificial locks of hair stuck to the identikit portraits, and many others.

“Primarily, the militia films served the glorification of the heroic agents of the Citizen’s Militia and as such, they were not valued by the critics. However, with the passing of time, their propaganda undertone faded away, and what is left are brilliant actors’ creations and efficient work of amazing film crews,” says Tomasz Kolankiewicz, the programmer of the section and the TVP Kultura review. “I dedicate Code Name Murder to the memory of Marek Malinowski whose enthusiasm for the militia novels was the direct inspiration for the creation of the review.”