Culture changes the world for the better! Throw a net for legal sources and show it on screen 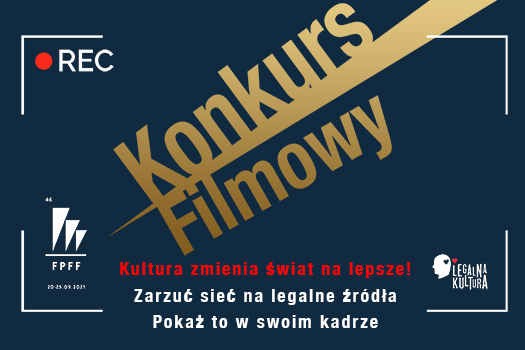 Legal Culture Foundation in cooperation with the 46th Polish Film Festival in Gdynia announce the 6th edition of the Competition for a short film promoting fair use of culture as one of the fundamentals of life in the digital and real world alike.

– We live in a civilization of diversity, which means enormous freedom, but also responsibility and vigilance in regard to various enticements and dangers. Our intention is not to lose basic values in this diversity, values that are fundamental to culture, such as being fair with others, having the ability to choose, and having the right for our input towards culture development to be respected.

COVID-19 pandemic only intensified the problems we have been dealing with in the digital reality for a long time. Our sense of responsibility for culture became even more important. Let us promote common use of legal sources of culture!

The crisis of values, we are facing nowadays, is visible also in culture. With the universal Internet access, we run into basic problems, such as fraud, theft and hate speech, all the time.

Therefore, we want to encourage Internet users to face the subject of the transfer of moral rules, applying in the real world, to the Internet. We want to show that fairness is the foundation on which also the virtual reality should be built. In the Internet, just like in everyday life, it is worth being fair with others, as Being fair is a good way to be! – say the organisers of the competition.

Get inspired by Legal Culture’s motto:

Use legal sources to support culture – it’s in your nature!!

Whether you’re a student, an amateur or a professional filmmaker. Whether you make a film using a mobile phone, you make an animation or use an old 16 mm camera.

Make yourself involved and make a film with a message.

Compete for the Legal Culture Special Award and see your work during the 46th Polish Film Festival in Gdynia. It is not only the matter of prestige but it’s your vote in fight against piracy, which is of utmost importance for artists – also for you.

The screen time cannot exceed 1 minute. After all, it is quite long. That was the duration of Lumiere brothers film Workers Leaving the Factory with which the history of cinema started in 1895.

Works submitted for the competition will be assessed by a jury, formed during the 46th Polish Film Festival in Gdynia, that will grant the following awards:

Films, with copyrights, can be submitted by natural or legal persons, as well as teams of filmmakers.

Copyrights to films cannot be limited in any way or violate third party copyrights and personal rights. Any materials used in a film (music, films, photographs, books, illustrations, games, etc.) must come from legal sources.

Competition participants can be provided with free consultations on copyrights and the protection of intellectual property. If you want to use the logo of Legal Culture in you film, please contact the office of Legal Culture Foundation, by e-mail: konkursfilmowy2021@legalnakultura.pl or by phone: +48 22 891 04 19 (Monday-Friday 9:00 a.m.–5:00 p.m.).

Detailed content-related assumptions, the procedure for submission of films and technical requirements have been included in the Rules and Regulations available at the organiser’s website HERE. The application form is available there too.

Throw a net for legal sources. Take part in the competition!