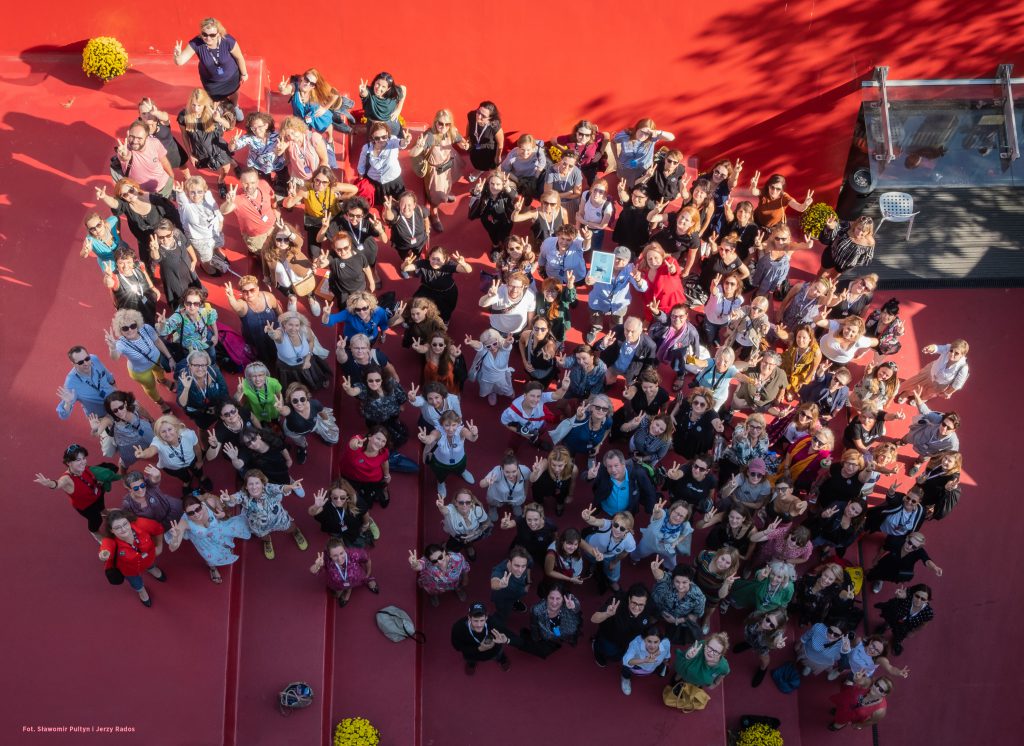 We present press information of „Kobiety Filmu” prepared after the conference “Kobiety filmu 50:50 w 2020” (Women of the film 50:50 in 2020) held during the 43rd Polish Film Festival in Gdynia. Photographs of the female filmmakers were taken on 21st September 2018 in Gdynia Film Centre by Sławomir Pultyn and Jerzy Rados.

Polish cinema is a woman, have been saying repeatedly critics and jury for several years now and it is hard to disagree, looking at the achievements of the women of the Polish film.

On Friday, 21st September 2018, during a conference organised by Kobiety Filmu during the 43rd Polish Film Festival in Gdynia, a declaration on the implementation of sex equality in film industry was signed. It was signed by the Director of the Festival, Leszek Kopeć and the Chairperson of the Programme Council, Wojciech Marczewski. The main demands concern the preparation of a schedule and mode of introducing changes aimed at sex equality in all decisive bodies of the Festival; conducting and sharing statistics on the sex of authors of films submitted for the Festival sections; continuity of the policy of transparency, i.e. further disclosure of names of the Selection Board and the Programme Council of the Festival in order to monitor the participation of women in the decisive bodies of the Festival. Similar declarations have been signed by international festivals in Cannes, Toronto, Locarno, Venice, but it is the Polish Film Festival that is the first national event to take up such undertakings.

The conference was opened by the leader of Kobiety Filmu, the producer, Renata Czarnkowska-Listoś together with the director Małgorzata Szumowska. Agnieszka Holland, being abroad, expressed her solidarity with the participants of the meeting.

EWA GRACZYK – a professor at the University of Gdansk, a literary expert and a social activist, who drew attention to the fact that language is a horizon of thoughts and encouraged everyone to change a language of exclusion to inclusive language. More on the topic here: http://krytykapolityczna.pl/kraj/kobiecy-desant-na-patriarchalna-agore/;

dr hab. MONIKA TALARCZYK from Lodz Film School who presented results of a research that has been commissioned for several years now by Krytyka Polityczna; the statistics are implacable and show that women in cinematography have fewer opportunities for professional development, are less frequently employed, earn less and are faced with less favourable treatment when distributing funds. Women are of course present in the industry but on posts that are less paid. The more prestigious functions and the higher the earnings, the clearer men dominance. For example, in the years 2012-2017, there were 28% of women in expert commissions of the Polish Film Institute, 23% of women were leaders, and only 14% were in the Polish Film Institute Council! Female film directors have used only 13 (!) percent of the budget granted by the Polish Film Institute for feature films, which means that men have had at their disposal 87 percent of the same budget for feature film production. Full results of the study are available here: http://krytykapolityczna.pl/kultura/film/kino-kobiet-raport-2018;

IRIS ZAPPE-HELLER – – the deputy director of the Austrian Film Institute who presented the situation of women in the film industry in Europe and the good practices applied in her home country;

PETER CARPENTIER – a FERA board member (Federation of European Audiovisual Directors), who talked about European statistics regarding the participation of female filmmakers in the audiovisual market on the example of female film directors. He drew attention to the difference in the level of earnings, to the loss of women, no matter the country of origin, despite similar, diligent education of representatives of both sexes;

MADELEINE EKMAN – an expert evaluating projects at the Swedish Film Institute and a producer who, in her presentation, talked about the overriding value of evaluated projects, which is their quality.

The conference was closed by the producer Ewa Puszczyńska who emphasised the role of unity of women in the film industry and the power resulting from mutual suport and goals.

WOMEN OF THE FILM is an informal initiative bringing together several thousand women who represent all professions in the film and television industry. Contact: kobiety.filmu@gmail.com