Enter your film for a competition promoting legal sources of culture! 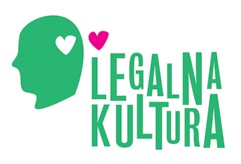 Legal Culture gathers people around legal sources of culture – it
promotes existing sources, establishing new sources and it makes it
trendy to use them. It invites the audience of the campaign and
recipients of the project to create a database of legal sources
together.

Basing on the currently applicable law, which ensures
authors’ remuneration for their work, Legal Culture enters into a debate
on adjusting the business model in disseminating culture to the state
of technology and social awareness.

The
long-term aim of the Legal Culture’s activities is to build awareness
of the recipients of culture in the new digital reality. Users and
recipients of culture should become aware of their role in the process
of creating culture. Without their contribution culture cannot exist –
both on the Internet and elsewhere. This is the task that we are
assigning to the participants of the competition.

Competition
films should become part of the message of the Legal Culture campaign
and present the question of the relationship between the author and the
audience. The aim of the Competition is to encourage authors to present
their own view on the subject of the audience’s role and responsibility
for the state of culture. A crucial element is drawing attention to the
situation of culture in the context of changes connected with
civilisation and wide access to culture by means of digital
technologies.

The authors’ task is to present the issues
connected with the process of creating culture – the changing roles of
authors and audience in today’s society. An important element of the
message should be the fact that conscious, legal participation in
culture is a mutual benefit: for the creators of culture and its
consumers.

Films may be sent in for the Competition together with an application form and a statement until 15th April 2012 (this date being the accepted postmark date) to the following address:

The length of the film must not exceed one minute.

Detailed information on the Competition may be obtained at the organizational office of 37th Gdynia Film Festival:

Maciej Dominiak – The Co-ordinator of the Young Cinema Competition

APPLICATION FORM FOR ENTERING A FILM