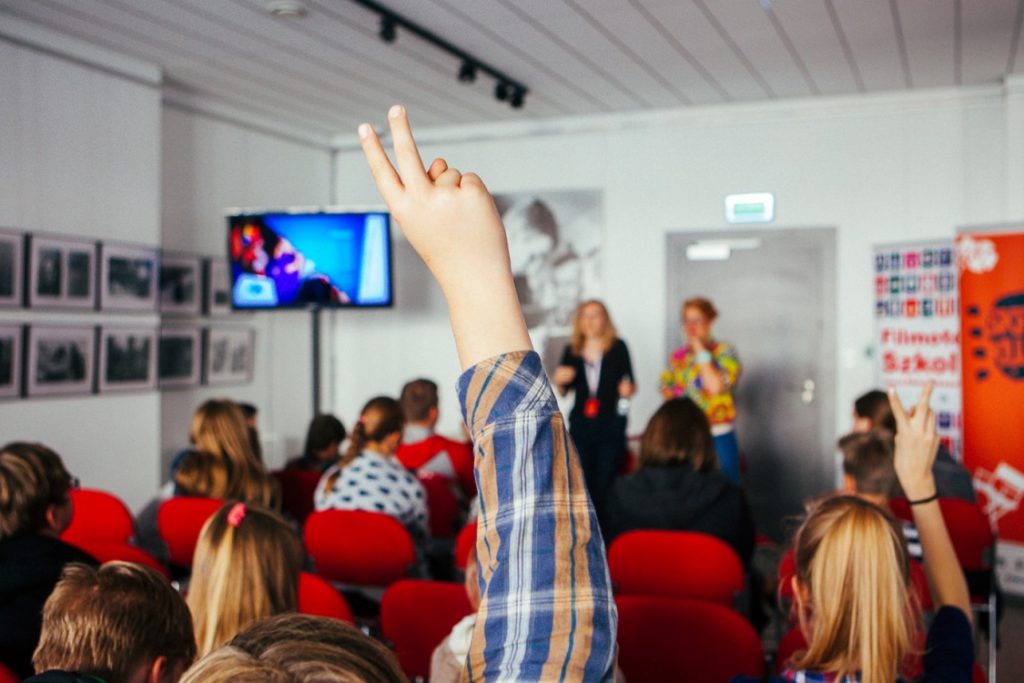 The 44th PFF would be incomplete without classes of the School Film Archive prepared especially for teenage Festival participants! The program includes debates, lectures and workshops, all of which will culminate in the awarding of the “Criticise!” statuette during the Young Gala.

The Youth Jury comprises of three teenage students, the winners of the “Criticise!” Competition. The Jury will assess films in the Main Competition and decide who receives the Skrytykuj.pl Award. Teenage jurors will hand out the prize for winning production during the Young Gala of the 44th FPFF on Friday, September 20, 2019.

Participation in the work of the Jury is an opportunity to see the latest Polish films, meet their creators, journalists and film critics, and improve film skills and knowlegde.

As a continuation of the “Criticize!” action, there will be special debates after selected screenings: Władysław Pasikowski’s “Kurier”, Jan Komasa’s “Corpus Christi”, “Ikar. Legends of Mietek Kosz “by Maciej Pieprzyca and “Bird talk” by Xawery Żuławski. During meetings led by renowned critics and film journalists, Kaja Klimek, Michał Oleszczyk, Adam Kruk and Sebastian Smoliński, participants will be able to share their thoughts on the films.

“SmartPhony, or what social media give us?”

Social media are increasingly shaping the reality surrounding us (contrary to their name, not only the social one!). That is why the program of the Film School Archive includes “SmartPhony, or what social media give us?” During the meeting, the issue of changes will be raised: new media introduced in language, interaction and communication style, relationships, and perhaps even ourselves. The classes are conducted by dr Karol Jachymek. Classes are related to the thematic scope of the 4th edition of the “National Olympiad on Film and Social Communication”, nominated for the second time in a row for the Polish Film Institute Award in the film education category.

School Film Archive prepared many interesting workshops for teenage participants of the 44th Polish Film Festival. Participants in the classes on the analysis of film posters will have the opportunity to develop the skills of analysis and interpretation of individual elements of visual message. The class is run by Jolanta Manthey and is based on posters from the “Comeda’s Time“ and “Cinema by Grzegorz Królikiewicz” exhibitions, prepared by the Museum of Cinematography in Lodz, who is the workshop partner.

Every year, there are more and more historical films, both Polish and international, computer games (educational ones typically entertaining). Historical reconstructions have become fashionable: picnics, villages, knights’ tournaments. What is all this for? Why is it created? How do history researchers and professors react to it? And how do ordinary people? Who has the right to create it and are there any rules to follow? How accurate are they? What is their purpose? The participants of the workshop “Public history – how does Pasikowski’s “The Messenger” fit into it”, will try to find the answers these questions.

There will also be lectures. Their thematical scope is very wide: from documentary films – “Bondage of the minds? Polish documentary cinema of the 70s”, through television “Television series – genres of yesterday and today”, people creating the film industry – “Players on the Polish film market“, the financial issues of film creativity – “Cinema is (also) business”. All lectures are related to the thematic scope in force at the 4th edition of the “National Olympiad on Film and Social Communication“.

The next item on the rich program will be the Filmoteka Szkolna School, i.e. film and reportage classes for young people, during which students will learn the secrets of journalistic work: they will learn how news is built, what stand-up is, what the prompter is used for and how to conduct an interview in front of the camera. They will test the acquired knowledge in practice – under the guidance of editors, operators and editors, they will report on the Festival. Materials created by students will be published on the website www.filmotekaszkolna.pl and on the Filmoteka Szkolna YouTube channel.

Film Urban Game “To the rescue of homo sapiens!”

As every year, we will play a Film Urban Game. According to it’s title – “To the rescue of homo sapiens!”, this time the mission will focus on saving a person. Success will only be possible if participants learn who this person is and where they can be! Solving tasks referring to Polish cinema will help finding our hero. In addition to freshness of mind, creativity and cleverness, the participant should also use cooperation, without it the mission will fail! The only limit will be the time (the mission will last 2 hours), after that the hero will not be saved! The Film Urban Game is a bit like an old game of hare and hounds, except that instead of arrows drawn in the sand, participants move from task to task.

Participation in events (except for festival screenings) is free. A detailed program can be found at: www.filmotekaszkolna.pl.

Classes are organized by the National Film Archive – Audiovisual Institute. The events are co-financed by the Polish Film Institute.

The organizers of the Festival are: Ministry of Culture and National Heritage, Polish Film Institute, Polish Filmmakers Association, Mayor of Gdynia, Marshal of the Pomeranian Voivodeship.

The Main Sponsor of the 44th Polish Film Festival is PKO Bank Polski.