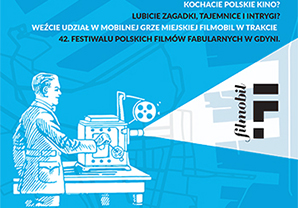 Imagine a situation where characters from well-known Polish films decide to leave film tape and move into virtual reality – what would such a place look like? Would it be as magical as Popielawy? Or maybe as varied as Łódź in The Promised Land? Would Filip Mosz from Amateur, the lover of the film art, capture you in his camera? Who knows… If you think moving to virtual film world is impossible, we convince you, it is – thanks to our game!

On 18th September, during the 42nd Polish Film Festival, the Filmobil City Game starts! It has been designed especially for Gdynia as part of the “400 km” project. Thanks to an unusual app, you will enter the film world and meet you favourite characters.

Gdynia has been called the capital of the Polish cinema not without a reason. The Polish Film Festival held here, every year attracts thousands of viewers and film and tv stars. It is a chance to get to know both the premieres and the classics of the family cinematography. The programme abounds in a number of accompanying events as well. The Gdynia Festival has been opening up to the needs of the Tri-city dwellers, it is more and more available and visible in the public space. The Festival is not only the screenings of 150 films but also numerous accompanying events, meetings, exhibitions and special actions, including outdoor events – Leszek Kopeć says, the Director of the Polish Film Festival. – I am glad that the Gdynia celebration of Polish cinema is also the place of promoting valuable social ideas, such as the common access to culture and putting down architectural barriers – Leszek Kopeć emphasises.

Take part in Filmobil City Game and discover challenges waiting for guests in a filmic Gdynia. Enter virtual reality and try your luck on a journey through the uncharted and hard-to-reach territory. Find out how surprising the Seaside Capital of Cinema can be!

The game will take 60 minutes. You can start by the information point (in Grunwaldzki Square 2, near Gdynia Film Centre) on 18th September from 12 to 7 p.m. All you need is a smartphone or tablet with an internet connection and Android or iOS. You can download the game via QR code, for example, at our information point. Active participants will come home with a prize.

Filmobil Mobile City Game is organised by Machina Fotografika Foundation as a part of the “400 km” project under the honorary patronage of the President of Gdynia Wojciech Szczurek and in partnership with Gdynia Film Centre, Polish Film Festival in Gdynia and Sirius Game Studio. The game is co-financed by the Civil Initiatives Fund and the City of Gdynia.