Gdynia Autographs at the 40th GFF! 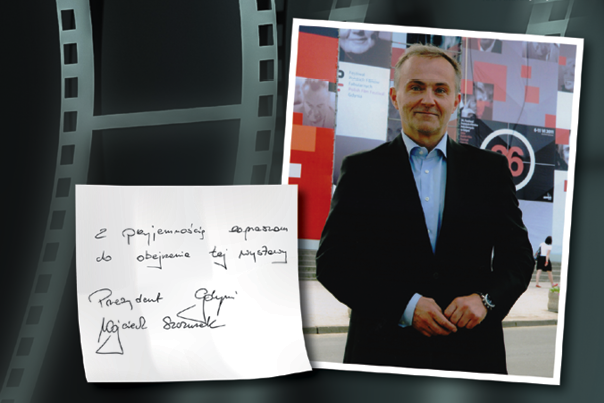 From 14th to 28th September 2015, at the Gdynia Kościuszki Square, there will be an open air exhibition of the photographs of well-known and popular people of the Polish film, taken by Andrzej Gojke. Year by year, Gojke has also been collecting autographs. What unites them is the fact that all of them have visited Gdynia numerous times as the guests and participants of the Gdynia Film Festival.

In this way, an unusual and slightly sentimental collection of film stills and entries attached to them. They are dedicated to the city – the capital of the Polish film. The exhibition complements the jubilee, 40th edition of the Gdynia Film Festival. It comprises of 44 photographs together with autographs, selected out of the collection of over 150 photographs. The Mayor of Gdynia Wojciech Szczurek – in his invitation to visit the exhibition – writes about the actors and directors presented: “They are related to Gdynia by their memories, resulting both from their professional duties and private experiences. We often get to know our idols differently, we see their less known, personal face and they become even more interesting to us.”

The photographs date back to the years 2000-2012 and document seveal years of work of the photographer from Gdynia, Andrzej Gojke. He is well-known among filmmakers for his film stills, among others, of “The Closed Circuit” directed by Ryszard Bugajski and for co-authorship of the album from “Black Thursday” directed by Antoni Krauze. Special attention is drawn to the oldest photograph of the exhibition – depicting Jerzy Stuhr with a camel brought to Gdynia to promote “Big Animal”. One of the photographs is dedicated not to an actor, director or a photographer but to Maria and Bogdan Kalinowscy, declared cinema aficionados who have not missed any Festival screening and are a symbol of love to the Polish film.