Gdynia for Children at the 40th Gdynia Film Festival! 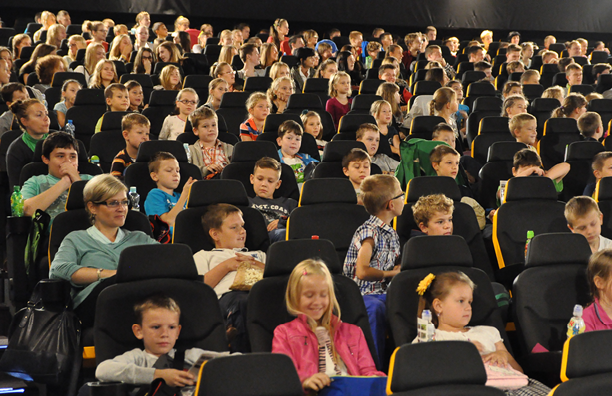 Gdynia for Children is one of the most important sections of the Gdynia Film Festival. Organised in cooperation with and prepared in terms of substance by the Polish Filmmakers Association, it is one of the most popular Festival events. In 2014, 10,000 young viewers attended it.

For a second time, the Gdynia for Children section screenings will be held in the Gdynia Helios cinema. The programme includes: the Polish Animated Film Festival for the youngest viewers, the Screen Adaptations of Polish Literature for young adults and Panorama of the World Film. In the case of the first two blocks, the young viewers, using voting cards, will choose the best animated film and the best book adaptation.

This year’s programme will be additionally enriched by film workshops for the young viewers concerning, among others, the making of the animated film and the short feature, and involving the preparation of the screenplay, acting tasks, as well as elements of cinematography, sound and editing work. The organizers also plan competitions and meetings with the creators of the films presented.

The films presented within the section include, among others, the digitally reconstructed animation “Jacek and Placek” by Leszek Gałysz with music by Lady Pank; “The End of the Holiday” by Stanisław Jędryka, “Friend of the Jolly Devil” by Jerzy Łukasiewicz, “The Liar” by Anna Sokołowska based on Małgorzata Musierowicz’s novel, “In Desert and Wilderness” by Gavin Hood. Gdynia Film Festival will also be a great opportunity to get acquainted with the most recent, not yet recognised, Polish animation work, including episodes of new series: “Agatha”, “Mami Fatale”, “Bear Me”, “Kuba i Śruba”, “Hip-Hip i Hurra” as well as episodes of the Poznań series “Baśnie i bajki polskie”. The programme of Gdynia for Children also includes Joanna Jasińska’s “It’s Quite True!”, based on Andersen’s fairy tale and repeatedly awarded at festivals; the animated carol “Three Kings” by Anna Błaszczyk; the most recent animation of the Polish children film classic, Wiesław Zięba: “Pompik the Bison”; as well as exotic films for the audience over the age of 10 from India, Iran and China. The organizers also announce competitions and meetings with the creators of the films presented.

For a second time, the Gdynia for Children section is organised by the Polish Filmmakers Association, with the financial support of the Ministry of Culture and National Heritage.

“In my opinion, each year Gdynia for Children achieves greater importance than it had the preceding year,” says Andrzej Jasiewicz, Chairman of the Polish Filmmakers Association Circle of Children and Youth Films. “During the last decade, only a few cinema films for children and the young audience were created. Everybody knows that in order to appeal to young people with their contemporary, serious problems, one has to seek an audio-visual message. And not necessarily should it be another global American production. In Gdynia, we show both Polish films and the world propositions in order to show children other horizons, a culture that is different from the one that surrounds them.

In fact, Gdynia for Children is but a drop in the ocean but still, it is good that it is held each year and that it is supported by the City Mayor Wojciech Szczurek and the Pomeranian Film Foundation. The Association is currently the most important institution supporting the children film. Each year, the most important children film makers, who understand the seriousness of the issue, come to Gdynia. Apart from the Ale Kino! Festival held in Poznań, there are but a few such events. All the time, we hope to find a way of encouraging institutions to accept the challenge of making a film for the young audience.”

The Gdynia Film Festival Artistic Director, Michał Oleszczyk, emphasises: “Gdynia for Children is a brilliant initiative and a reason for great joy to me in that it serves the educational purpose, educating generations of filmmakers and film aficionados. The multitude of this year’s programme is genuinely impressive and I can only regret that being engrossed in the ‘adult’ festival, I will not be able to follow all the screenings and workshops. Last year’s view of the screening room full of children waiting for the opening film to begin filled me with joy that was incomparable to even the most official screenings of other GFF sections.”