Gdynia Industry at the 47th PFF 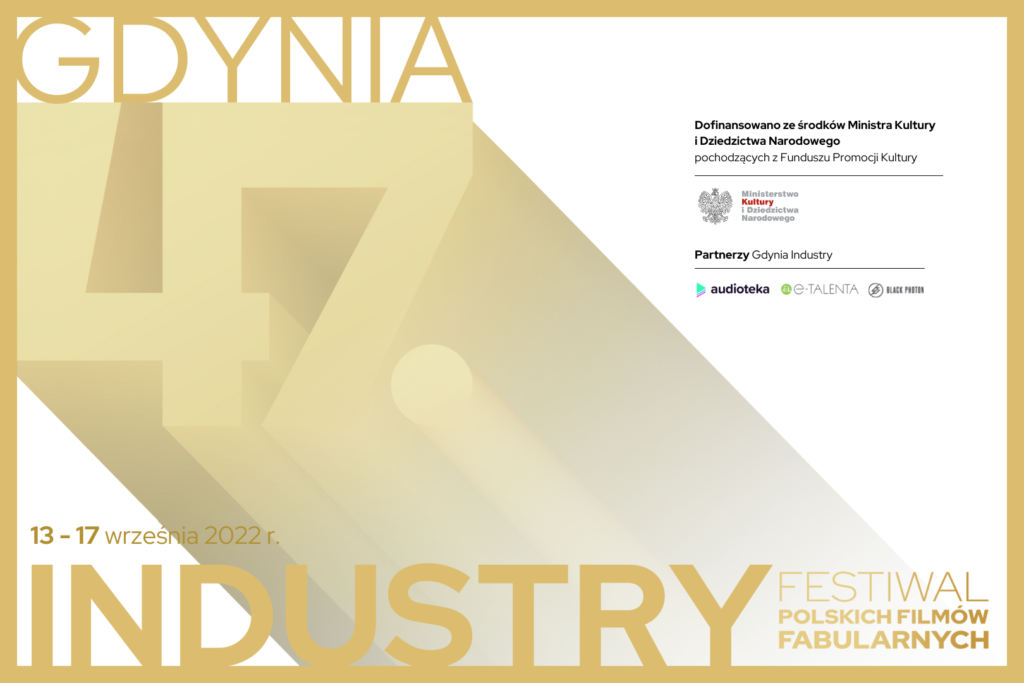 Gdynia Industry is a comprehensive programme of activities aimed at film industry representatives and designed to support the development and self-regulation of the audio-visual industry and network it with other creative sectors. Gdynia Industry activities not only serve to define problems but also search for systemic solutions, consult with external entities and exchange experiences with those operating similarly abroad. Much emphasis is on education, defined as the expert development of entities operating on the audio-visual market, attracting leaders and talents, implementing optimal solutions and generating innovation. In this way, Gdynia Industry, taking up the most important current topics and problems of the industry, looks for creative solutions, suggests directions for development and sets trends. This year’s programme is divided into three parts – panels and debates, networking and podcasts.

The complete Gdynia Industry programme is available on the website: www.festiwalgdynia.pl/gdyniaindustry/

Gdynia Industry will begin with a panel dedicated to casting. Together with casting directors, industry representatives and the e-TALENTA platform, we will look into the challenges posed by casting – the creative element of every production.

What is Planet Placement? With the current state of the environment, the topic is becoming increasingly pressing. That is why we will once again consider what the film industry can change for the better in terms of ecology. During Gdynia Industry, we will meet with green film experts and look for planet-friendly solutions to be applied both in film production and in the organisation of festivals. Partners of the event are the Regional Representation of the European Commission, Creative Europe Desk Poland, Polish Audiovisual Producers Chamber of Commerce and Film for Climate.

The Microbudget Film Competition once again features in the festival programme, and more and more filmmakers have experience in working on this film form. And although more projects are being realised every year, microbudget is still a relatively new concept. Catering to the needs of the young generation, Gdynia Industry invites you to a meeting with producers and creators of microbudget productions during which the guests will share their experience and good practices. The meeting is organised in partnership with the Polish Film Institute, which introduced the microbudget film financing programme in Poland in 2016, and the Young Producers Section of the Polish Audiovisual Producers Chamber of Commerce, which fought for its introduction and works for the benefit of the young generation of Polish producers and filmmakers.

REGULATION OF THE AUDIO-VISUAL LABOUR MARKET

n recent years, the subject of working conditions in the audio-visual sector has been raised with increasing frequency and clarity. There have been calls for the introduction of an eleventh-hour working day, new trade unions have been established, more artists’ guilds are being created, and the community is steering toward self-regulation. Thanks to the presence of all major production teams at the PFF in Gdynia, the Festival is a natural place for lobbying activities and pushing forward discussions on the changes that need to be introduced. During the meeting, we will name the problems to be solved by the proposed changes, discuss possible solutions to be implemented, including good practices from other European markets, and create a list of demands and goals to achieve in a one-year and five-year perspective. We will also discuss the necessary changes in working on a film set in the context of maternity and paternity. The event partners are: Polish Film Institute, Producers Guild of Poland, Polish Audiovisual Producers Chamber of Commerce, Polish Female Filmmakers Association, Filmmakers Union

The next panel will be devoted to a screenwriting debut. During the discussion, we will talk about the problems faced by budding screenwriters, which usually turn out to be universal for the entire screenwriting community regardless of experience. We will consider the nature of the profession (long creative process, no licence required), current problems (underfunding, lack of institutional support) and possible solutions (establishing a minimum rate, raising the rank of screenwriters among creators, regulation of contracts, PFI support). We will look at the role of the Polish Screenwriters’ Guild and the possibilities of cooperation between the Screenwriting Department and the Film and Television Direction Department of Lodz Film School.

EUROPEAN INDEPENDENT PRODUCTION AT A CROSSROADS. DEBATE ON THE FUTURE OF THE AUDIOVISUAL MARKET

The film market is changing so rapidly that film and series production and distribution models today can’t compare with those of three years ago. The post-pandemic reality and the general economic situation in Europe, linked, among other things, to the war in Ukraine, certainly contribute to this evolution. Independent producers face increasing challenges, and film institutes adapt to the new balance of power. During the event, we will discuss substantial changes happening as we speak in the film market in Poland, Europe and globally. Together with the Polish Audiovisual Producers Chamber of Commerce we have invited representatives of the Polish market and CEPI European Audiovisual Production members. We will consider possible strategies for local producers to develop and maintain their independence. It will also be an opportunity to discuss altering the model of public support for European productions.

This year’s Gdynia Industry will include the already well-known meeting “Face to Face” – with Radosław Śmigulski, Director of the Polish Film Institute as well as the annual Polish Filmmakers Association Forum and the Closing Debate.

At the PFF in Gdynia, not only are representatives of all major production divisions present, but also people representing distribution companies, streaming platforms, festivals or regional funds. Throughout the week, we invite you to a series of industry meetings, giving you the opportunity to network with the most important experts in the film industry.

Events aimed primarily at young filmmakers and producers are “1-on-1” meetings, a series of one-on-one meetings with key people in the film industry, and “Industry Without Secrets. Producer’s Lunch”, during which older, more experienced film producers will share with their experience in selected fields of filmmaking with their younger colleagues. Each topic will be discussed at a separate table, in an intimate setting. The discussions will take place simultaneously over a shared lunch.

Registration for both events takes place online from 5th September via a form available at  www.festiwalgdynia.pl/gdyniaindustry/

In turn, Audioteka and StoryLab.pro invite you for good coffee, a nutritious breakfast and the opportunity to make new friends in the screenwriting industry during the festival. During the meeting, we will conduct a networking game, briefly introduce how we approach the slogan “well-told stories” in practice, and will gladly meet everyone who wants to test themselves in creating audio productions and super-productions. The breakfast will be hosted by Arkadiusz Seidler (CEO of Audioteka), Aleksandra Dąbrowska (Head of Production of Audioteka) and Agnieszka Kruk and Andrzej Gorgoń from StoryLab.pro. The meeting will be held within the framework of the brand’s very own programme Usłysz Kulturę which supports, among others, scriptwriters, directors and reporters in financing and realising original audio productions.

Regional Film Funds invite you to an industry lunch. At the meeting, you will have an opportunity to talk about the role of RFFs in the changing audio-visual market, learn about their current situation. It is also an opportunity make new contacts in an informal atmosphere.

This year, for the third time, Gdynia Industry is making a Close-up, a series of broadcasts focusing on the intersection between the world of film and creative industries. This year we will be listening intently to sound. For many years, there has been a conviction that Polish audio-visual productions are poorly audible. Together with the most important people responsible for sound in films – sound engineers, sound post-production specialists, producers and directors – we will consider the source of this problem. Is education to blame (most sound engineers are trained at music academies and not film schools), or are mistakes made at the stage of pre-production? Or should we blame the Polish language itself? We will also learn about sound reconstruction during the digital restoration of the most important Polish films – all of the above in the form of podcasts released during the Festival.

Episodes will be available on this year’s podcast partner Audioteka and on the festival’s Spotify and YouTube channels.

Co-financed by the Ministry of Culture and National Heritage within the framework of the Creative Industries Development Programme.

REGULATION OF THE AUDIO-VISUAL LABOUR MARKET

EUROPEAN INDEPENDENT PRODUCTION AT A CROSSROADS. DEBATE ON THE FUTURE OF THE AUDIOVISUAL MARKET