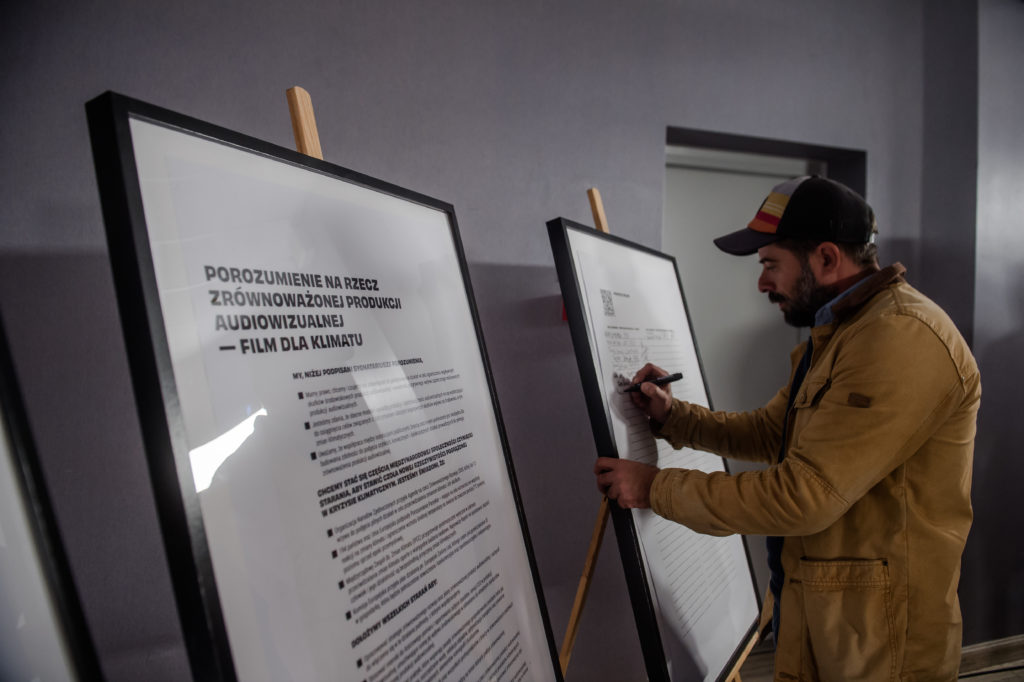 What should you do to make film production more sustainable and less harmful to the environment? Act at a grassroots level, individually, systemically, but most of all: act now. Day 1 of Gdynia Industry, 20 September 2021, was dedicated to “green,” i.e. sustainable film production. At the end, the participants signed a manifesto: Agreement for Green Audiovisual Production – Film for Climate. Every Festival guest can sign it at the Musical Theatre until Saturday.

Paulina Kufel-Ślęczek from the European Commission’s Regional Representation based in Wrocław, was the first to take the floor. The institution is an intermediary between the European Commission’s programmes and institutions and regional organisations. Among other things, Kufel-Ślęczek showed the most important stages of the implementation of the European Green Deal and expressed her appreciation for the initiators and signees of the Agreement for Green Audiovisual Production – Film for Climate manifesto: the Polish Film Festival Office, Polish Film Institute, KIPA Polish Audiovisual Producers’ Chamber of Commerce and the Agreement Group.

The European Commission’s representative briefly presented the agency’s environmental goals, including a zero carbon footprint and a drastic reduction of the emission of other greenhouse gases by 2050, that is to achieve climate neutrality. She added that the measures to achieve this goal should be intensified and implemented where they are lacking. Kufel-Ślęczek emphasised that it is of utmost importance to change our lifestyles, methods of production, and to create plans to adapt to the changes caused by the climate crisis. The added that one of the EC’s tasks is to review UE regulations in terms of their consistency with the climate law. The Commission also offers tools to help adapt to the new regulations. They are urgent and necessary in the AV business because, as the EC representative mentioned, research shows that a TV series episode generates from 35 to 100 metric tonnes of CO2, while a feature film generates 192 tonnes. Support for making production more sustainable is one of the goals of the MEDIA component of the Creative Europe programme, which has got a larger budget in 2021-2027 to help carry out the Commissions two key priorities: gender balance and the goals of the European Green Deal.

The costs incurred to making film production more green can be considered as eligible costs in the MEDIA component. For more details, contact the representatives of the Polish desk at Creative Europe.

The second to take the floor was Luca Ferrario from the Trentino Film Commission who, in line with the principles of the green deal did not leave a carbon footprint by traveling from Italy to Poland, but joined the conference online. He briefly presented the challenges and the Green Film initiative for climate sustainability. He emphasised that the work of Green Film, on the one hand a scoring system to assess how green a film production is and, on the other hand, an agency that awards certificates to sustainable productions, has gone from local to national, and then international. After certain small modifications, which are still in progress, in fact, Green Film may be adapted to work in many regions and countries; seven other commissions in Italy, Norway and Belgium already use it. Ferrario also said that one of Green Film’s tasks is to inform about the requirements necessary to have a production considered as sustainable, and then how the verification of the implementation of the procedures takes place. Three kinds of entities may be Green Film’s partners: film commissions and funds, producers private and public auditors. The services of the former cost from 800 to 1200 euro for the verification of every commenced 4 weeks of shooting, while the services of public auditors are free.

Ferrario emphasised that the system in Trentino is simple and has yielded results: 50% of the producers who apply for grants from this film fund have voluntarily adopted the Green Film principles.

Asked about his recommendations for the Polish film industry, Ferarrio replied: “Get to work fast!” He added that one shouldn’t look for a solution that will make everybody happy, but to implement the first green actions as soon as possible because their implementation also takes time.

You can find detailed suggestions and procedures at https://www.green.film/

In the second part of the “green” day: Patrycja Młynarczyk (Silesia Film Commission), Maciej Dydo (KIPA Polish Audiovisual Producers’ Chamber of Commerce), Małgorzata Kiełt-Grześkiewicz (Planet for Generations), Tomasz Morawski (Haka Film) told us what they are doing as the leaders of green change in Poland.

Małgorzata Kiełt-Grześkiewicz explained that, in collaboration with the British Albert company and the BFI, a “New Screen Deal” was developed, which tells you how to turn your film production into a more sustainable one, what can be transferred and adapted from other industries, what AI solutions may be helpful and how to e.g. reuse e.g. set design components. The representative of Planet for Generations also highlighted how important the education of film school students is and that there should be a new profession, green manager, to help producers seek and implement green solutions. She also emphasised the need for systemic support of green solutions. The panellists agreed. “There are a million ideas,” she concluded.

Paulina Młynarczyk from the Silesia Film Commission spoke about the grassroots efforts of funds and commissions which, working under a joint section at the KIPA Polish Audiovisual Producers’ Chamber of Commerce) initiated efforts whose result was the “Film for Climate” manifesto. She added that the agreement was joined not only by the commissions, but also by producers, location managers, CETA, Advertisement Producers’ Club, KIPA, who all contributed their perspectives and experience.

The commissions developed maps of their regions with the contact details of eco-friendly providers of products and services (catering, waste management etc.), make efforts to eliminate generators from film sets and other undertakings for sustainable production.

Maciej Dydo of KIPA mentioned the undertakings of the Chamber as a centre of new competencies, gathering good practices, working in the Film for Climate group etc. He also emphasised that green measures are a multistage process that may be implemented at various levels: production and systemic (making the costs of green production eligible at the PISF). He added that he was looking at the national solutions implemented in France (CNC) or Germany (German Film Fund), where green solutions will soon be required when applying for grants. The KIPA representative added that the Polish Ministry of Culture and National Heritage received a proposal to put sustainable measures on the list of eligible costs in a system of incentives for AV producers.

Tomasz Morawski of Haka Films, in turn, emphasised that the necessity to implement green solutions that would simultaneously be economically viable is a challenge for producers. He gave the example of the purchase of a cheaper set whose taking to the location would raise the carbon footprint of the film production. On the other hand, it was possible to return elements of the set to private individuals, instead of throwing them away or destroying them. Morawski added that the consultations carried out by Alex Leszczyńska, Maria Deskur and Stanisław Zaborowski showed that a change in catering, reducing printed copies or plastic use is just the beginning of green change and that many more changes can be introduced. Fortunately, the Haka Films producer said, most crews reacted positively to the implementing of green changes adding that the goal was to use less resources (including campers and forklifts), reuse sets and costumes, and coming up with further green solutions.

The final panel of Gdynia Industry Day 1 had: Kamila Morgisz (PISF – Polish Film Institute), Paweł Kosuń (Centrala Films), Monika Głowacka (Łódź Film Commission), Zbigniew Domagalski (WFDiF Documentary and Feature Film Studio). They discussed specific solutions that should be introduced in Poland in order for audio-visual productions to become more and more green, and the barriers that make it hard for producers to take up such initiatives.

Kamila Morgisz from PISF emphasised that the lack of environmental awareness in all of society, not just the audio-visual sector, is a challenge. She added that in the subsidy system at PISF does not rule out expanding the list of eligible costs, although at this time any special scoring of sustainable efforts at the application stage is not at a scale that the Institute would like.

Paweł Kosuń of Centrala Films told how he had to explain his purchase of reusable bottles which, contrary to doubts, turned out to be cheaper than everyday deliveries of plastic crates of water. He emphasised how very important it is to raise awareness and teach environmentally-friendly habits.

Monika Głowacka from the Łódź Film Commission emphasised that action is key at this stage, although adding that she is against imposing restrictions on those who do not comply with green solutions, such as tax hikes for car owners.

She added that in the organisation she represents, and in other associated regional film funds, the applications for support already have a tab concerning sustainable production. Asked about the plans for the coming months she mentioned the implementing of the Green Film measures, looking for sustainable production auditors and certificates, enlarging the database of environmentally-friendly suppliers and working with educational institutions and training courses for professionals.

Zbigniew Domagalski from WFDiF also emphasised the role of education and awareness that must support the economic mechanism. He added that in the coming two years he will carry out consultations on the modernisation of a technological park, greener management of resources, such as sets and costumes, and the decommissioning of old generators that produce a lot of pollution.

At the end of Gdynia Industry Day 1, the participants signed a manifesto: Agreement for Green Audiovisual Production – Film for Climate. Every Festival guest can sign it at the Musical Theatre until Saturday.

Programme of the 2nd day of Gdynia Industry

The event focuses on film in relation to industrial design, graphic art, including computer graphics, and comics. During the comic books pitching, publishers and authors will present the representatives of the film industry with selected graphic novels released in Poland in recent years.