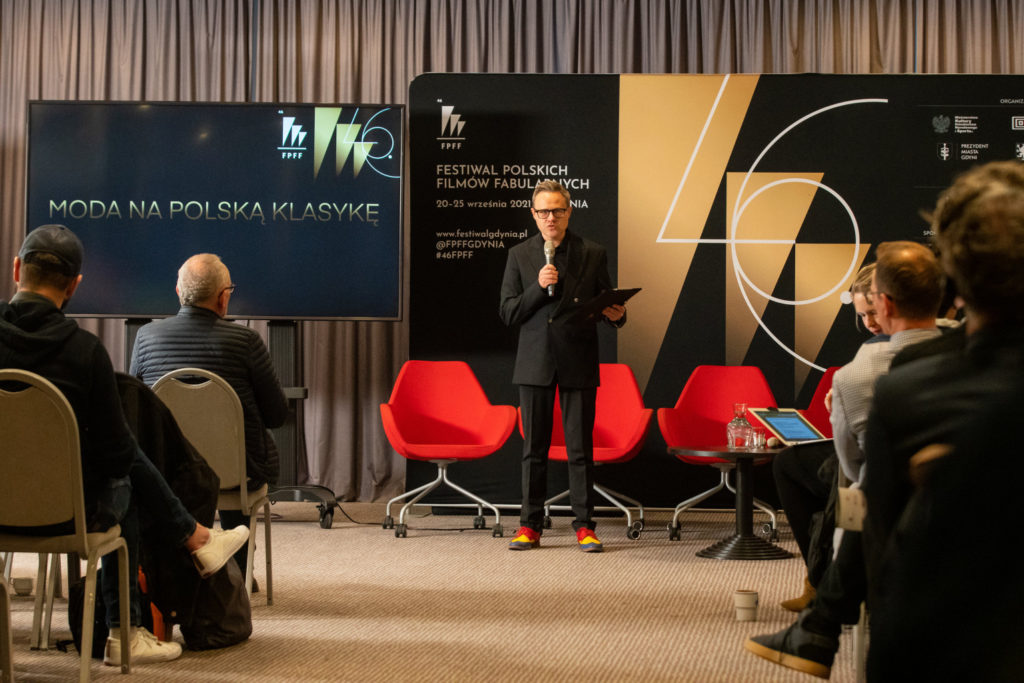 Polish Classics Á La Mode– this was the theme of the fourth day of industry events of Gdynia Industry. During the presentations and the discussion, previous actions taken in the field of restoration, digitalizsation, and enabling access to archival Polish films.Moreover, the experts described challenges and opportunities resulting from increasing interest in the cinema of the past.

The host of the fourth day of Gdynia Industry was critic Łukasz Maciejewski, and the first speaker was director of the Polish Film Institute Radosław Śmigulski, who summed up the actions taken within the Digital Poland project.

He stressed that the top places in the most popular Polish films rankings are still held by older productions, which proves the enduring position of classic cinema. The PFI realized programme Digital Polandwith national film studios (which in 2019 were incorporated into the Documentary and Feature Film Studios (WFDiF); It had a budget of 110 million zlotys, 80 million of which came from European funds, 15 million from the Ministry of Culture, National Heritage and Sport, and the rest was paid by the WFDiF.The result of this actions isthe restoration of 160 feature films, 71 documentaries, and more than 300 newsreels and animated films for children and adults.

After the director of PFI, the floor was given to Maciej Chmiel, director of Studio Filmów Rysunkowych in Bielsko-Biała. He gave a short summary of 4 years of work with the archives. Films for restoration were chosen from productions made between 1953 and 1992 – mostly from the 70s, the golden era of the SFR. Apart from children’s animations like Bolek i Lolek, Reksio, or Przygody Baltazara Gąbki, the restored films also included non-camera films by Julian Antonisz and Koziołeczek by Lechosław Marszałek – the first Polish film to be awarded abroad, at the festival in Karlovy Vary. The total number of footage restored by the Studio amounts to 2500 minutes: 267 short films and 4 full-length films. Maciej Chmiel announced that an interactive child film and animation centre is being built next to the SFR, and that the recently unveiled statue of Don Pedro(the antagonist from Przygody Baltazara Gąbki) is now a part of the fairy-tale route in Bielsko-Biała.

HOW TO FIND A HAIRCUT

The next to present the results of their work, including the streaming platform 35mm.online, were the representatives of WFDiF: director Zbigniew Domagalski, deputy director Joanna Skierska, and head of Licensing Stanisław Bardadin. The informational-promotional filmbriefly showed the process of working on the archival footage, which was cleaned, its image stabilised, torn frames repaired, and the blinks, drops, spots and scratches removed.Similar treatment was applied to animated films, in Poland created mainly by using stop-motion technique, where each frame is placed on the operator’s table and registered by a camera behind the glass.

Interestingly, professionals from WFDiF used an innovative method of working with sound – usually recordings on an optical or magnetic tape are used, which make for the best montage. Thanks to the software created by Polish scientists, it is possible to work on scans from the optical track and generate sound in this way.

WFDiF’s presentation also focused on the way of storing, ordering, and categorising archives, making them easy to navigate. The functionalities allowing easier content navigation are also employed within the Studio’s 35mm.info platform – there it is possible to search not only by the director’s surname or the title, but the content is also grouped into clusters and described by film expert Monika Talarczyk-Gubała.

As emphasized by the representatives of WFDiF, the portal’s offer will not only include archives, but also new productions and co-productions of the Studio, and in the future it will also contain short films, added Zbigniew Domagalski. One of the ideas of extending the resources isto offer co-production contributions in exchange for exclusive broadcasting rights for 35mm.online.

The director of WFDiF added that the basic version of the platform will be free, however, premium users will have to purchase a subscription or a one-time access.

35mm.online will not only be aimed at an individual viewer (standard account), but also at any license holders (business account), to whom the platform will provide with easy access to purchasing a license and generating a digital copy – Stanisław Bardadin emphasized that this process will be entirely automatised. Joanna Skierska summed up that WFDiF realized two tasks as a part of the Digital Poland programme: the restoration and digitalization of more than 3,500 pieces of footage, and the construction of distribution centre and the VOD platform. She added that content available on the platform – which also has an English language version – has a complete distribution package, which includes audio-description, frames, and subtitles. While creating 35mm.info, one thing that was also taken care of was user experience –easy content navigation was provided by creating a search engine that has a lot of advanced functions, allowing the user to find content by tags, and even by characteristic scenes such as “a street in Warsaw” or “hairstyles from the 60s”, which is provided to them not only in the form of a title, but also a time code.

WAR OF THE WORLDS

The next lecturer was Przemysław Herburt from the TVP, who also presented a film material regarding the work of the Polish Television on digitalization and restoration of content. At the TVP, the footage is scanned to 5k – said Przemysław Herburt – the main goal is to remove damage and irregularities. The crown jewel of the Television’s resources is War of the Worlds, which was created from archived footage that was even as old as 100 years. Work on this title lasted for 101 days, and after frame synchronisation,350 shots added up to a total of one hour of film. The representative of TVP added that currently a unique process of digitalization and restoration of regional television broadcasts of the Polish Television is being carried out. There are nearly 3000 of them, and the work is branched out to facilities in Krakow, Wroclaw, and Katowice.

The footage digitalised and restored by TVP as a part of the Digital Poland project can be accessed for free at the website www.cyfrowa.pl.

Przemysław Herburt encouraged all of those present to go and see the small digital restoration workshop set up here in Gdynia at the PFF, where the secrets of the process can be learned.

Once again, the first speaker was director of the PFI, who he reminded that even though the digitalization efforts made so far are satisfying, they constitute less than 5% of the footage of the archives.

The scope of the challenge is enormous, and the Institute will continue to support digitalization and restoration efforts in the upcoming future.

Film expert Diana Dąbrowska named a different challenge regarding the aforementioned topics – the availability of copies and a complex legal status of films which makes purchasing a license for a screening difficult or even impossible.She was also doubtful towards the 35mm.infoplatform, which offers vertical content (wide choice and access), similarly to leading VOD platforms on the market, instead of horizontal (the choice is time-limited), like MUBI, which promotes arthouse and classic films. The second solution would improve the so-called reception discipline and help the viewers in choosing content. She also quoted Martin Scorsese, who said that the moment old content is restored, it becomes new; it is worth building new activities around them for young activity recipients, such as grouping various titles together.

In the later part of the discussion, Diana Dąbrowska added that one of such activities, which make the cinema classics more appealing, may be creating a competition section for restored film sat Polish festivals, which then would be in its rightful place – on a large screen.

Referring to the topic of choosing content, Zbigniew Domagalski announced that the editorial team of 35mm.online will be selecting and grouping content so that the task will become easier.

The representatives of post-production companies Andrzej Łucjanek and Jędrzej Sabliński expanded the perspective on the matter with their views. The head of DI Factory gave an example of how Germans digitalise their resources by granting a subsidy of 10 million euros annually. He added that Polish classics are largely desired abroad and presented at major professional events, such as the festival in Lyon curated by Thierry Frémaux.

Andrzej Łucjanek pointed out that the experience gained by companies carrying out restoration and digitalization, brought fruitful results in the form of contacts and commissions from studios in USA and Australia.

One of the topics of the discussion were also classic films in DVD and Blue-Ray storage formats. The speaker was Michał Oleszczyk, who is working with several foreign distributors of classic films. He stressed that it is these formats that dictate trends of what films are currently watched and help them reach the viewers, because, thanks to their reputation – and we are talking about such legends of the market like Criterion Collection or Second Run DVD – they have an international network of consumers. Michał Oleszczyk added that the market of classic films is interested above all in discovering new – metaphorically speaking, of course, because we are talking about creators like Łarisa Szepitko – names, and not just more and more editions of cult classics like Bicycle Thieves by de Sika.

Maciej Chmiel from the SFR added that the challenge is reaching young viewers with restored content, which is currently of greatest interest the generation of 50- and 60-year-olds, who remember Bolek i Lolek and Reksio from their childhood. Refreshing the brand, merchandising, and other tools of modern marketing can help in reconnecting today’s audience with the content of yesterday.

During the lecture, another important challenge was mentioned – storing restored and digitalised data in the so-called repository. As Małgorzata Roguska put it, “tapes will save the digital”, because a 35 mm copy is a format used for archiving films, and if stored properly, it can survive from 150 to 500 years. The professional from WFDiF requested that the footage should be immediately taken care of in a manner that ensures proper conditions for their storage.

The director of PFI retorted that such actions are already carried out by the National Film Archive – Audiovisual Institute, and that the Polish Film Institute can support these actions by accepting requests for subsidies.

The lecture ended with a request from the audience that the price of purchasing a license for Polish film classics should be more affordable, because the current one makes the educational activities of film educators and Film Discussion Clubs more difficult.

The report was prepared by Ola Salwa

Friday at the Gdynia Industry will focus on the impact of pandemic on the Polish audiovisual market and the changes taking place in the functioning of the film industry.