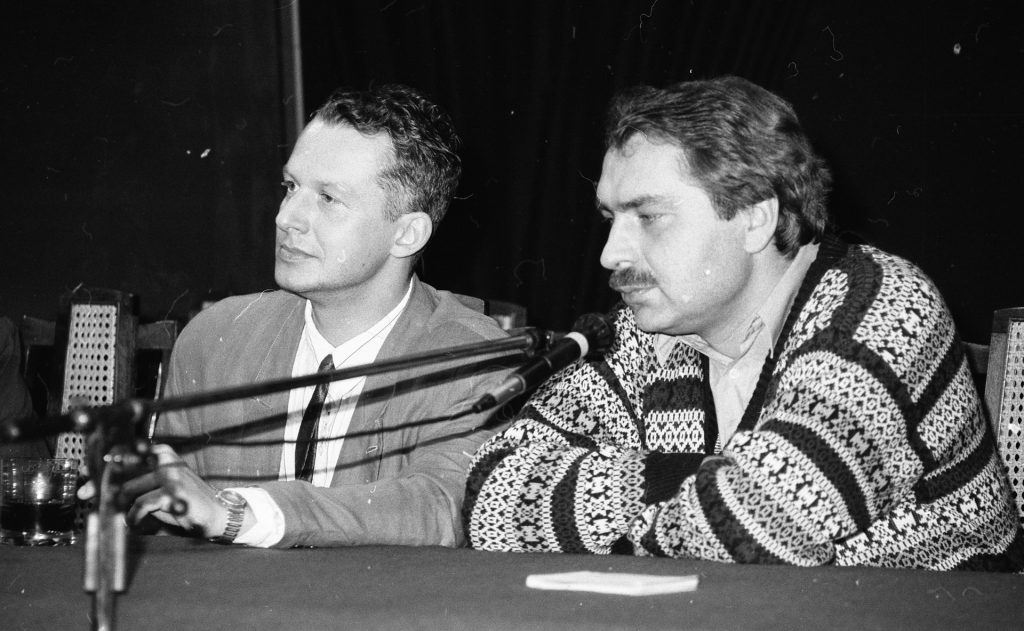 He was the Artistic Director of the Polish Feature Film Festival in the years 1992-1993. Jarosław Sander died on 27th February 2018. On 3rd March, his farewell was held in Radom, his hometown.

He was offered the post of the Director of the PFFF by the then chief of cinematography, Waldemar Dąbrowski. “I believe the proposal was due to my activity related to organizing the roots of a new Polish cinema in the times of the first <Solidarity>. Shortly before the martial law, a Committee of Saving Cinema was created. Together with the late Bolesław Michałek, I was the President of the International Contacts Committee,” he recalled. But Sander was also unambiguously related to the legendary Karol Irzykowski Studio, which he had co-founded and co-run together with Janusz Kijowski. He remains the symbol of the Studio until this day.

His professional path was beautiful. The Irzykowski Studio is but one of the institutions that he co-created. Jarosław Sander, a graduate of the Polish Studies of the University of Warsaw, worked in the Chief Cinematography Board, where, as Feliks Falk put it recently, “he was the most decent man of all those who worked there.” For some time, he was related to Telewizja Polska. In the 90’s, he started co-operation with Polsat, where he run the Film Editorial. He produced tv series, among others, Samo życie, Daleko od noszy, Ekipa, Pensjonat pod różą, Świat według Kiepskich, Szpilki na Giewoncie, Hotel 52, Przyjaciółki, Skorumpowani i Tylko miłość, as well as films: 0_1_0, Skorumpowani, Korowód, Nienasycenie.

Nina Terentiew, when bidding farewell to Jarosław Sander, recalled his relations with the Polish Feature Film Festival. Sander mentioned that his short term was during the hardest time of the Polish cinema. And of the Polish culture in general. The great systemic transformation, related with the Balcerowicz reform, to artistic circles meant basically a revolutionary movement from a model of total state donation to a free market model. The market specificity of the culture industries was not understood then. Sander aptly noted that Waldemar Dąbrowski was the first politician-manager who understood that the development of culture, including the cinema, did not mean an automatic movement to market rules, and who focused on the protection of the base and heritage of cinematography and on providing it with prospects for development. Sander emphasised that thanks to that, 25-26 titles could be included in the Main Competition each year.

During his term, the idea of inviting external observers to the jury emerged. It was also the time of the famous jury composed of, among others, father Tischner, Kazimierz Kutz, Adam Michnik, Jerzy Płażewski, Janusz Głowacki. When asked for an evaluation of this hard time in the Polish cinematography, he answered: “These were the times of <Psy> by Władysław Pasikowski, which came to Gdynia as a spectacular event. There was the film by Robert Gliński <Wszystko, co najważniejsze>, <Pograbek> by Jan Jakub Kolski, the future candidate for an Oscar – <Szwadron> by Juliusz Machulski. The level and topics were varied. But I do not recall us having in the Main Competition a really bad film which would totally fail to address the taste of the audience.”

We will miss him a lot.

Jarosław Sander and Bogusław Linda at the PFFF in Gdynia, 1990