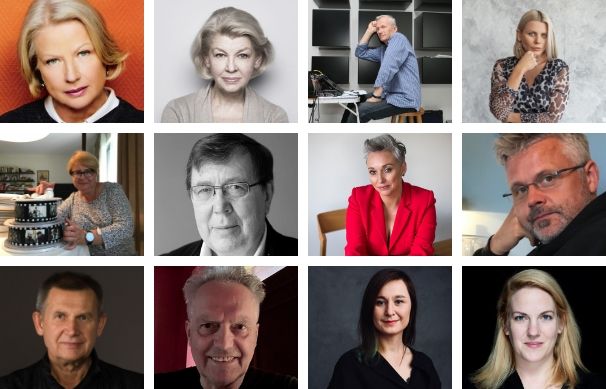 Jury of the Main Competition

Maciej Wojtyszko – Chairman of the Jury
Film, theatre and television director. He was born on the 16th of April 1946 in Warsaw. He began his studies at the Faculty of Philosophy at the University of Warsaw. He abandoned them to study Directing at the Łódź Film School. Writer, playwright, professor of the National Academy of Dramatic Art in Warsaw, two-time dean of the Faculty of Directing. In the years 1990–1991 he was the Director of the Powszechny Theater. He made over twenty TV Theatre plays, five feature films, dozens of theatre plays, more than two hundred TV series episodes. He is the author of many radio plays, dramas, theatre plays and songs. He writes books for children and for adults, often illustrating them himself. Winner of awards at festivals in Poznań, Gdynia, Częstochowa, Tarnów and Moscow for his films Synthesis and Louise’s Garden. Decorated with the Order of Polonia Restituta, Fifth Class, in 2002 for outstanding achievement for Polish culture and for his educational work. He is also the Knight of the Order of the Smile.

Ewa Braun
She graduated in History of Arts from the University of Warsaw. She won an Academy Award for set decoration for Schindler’s List, directed by Steven Spielberg. Member of the Oscar-awarding Academy of Motion Picture Arts and Sciences in Los Angeles. She received the Bronze Lions Award for The Young Magician at the Polish Feature Film Festival in Gdańsk in 1987. She worked on sixty feature films and multi-episode TV series as a costume designer, set designer, art director. She collaborated with outstanding Polish and foreign directors such as: Andrzej Wajda, Krzysztof Kieślowski, Krzysztof Zanussi, Agnieszka Holland, Wojciech Jerzy Has, Tadeusz Konwicki, Janusz Majewski, John Irvin, Constantin Costa-Gavras, Steven Spielberg, Peter Kassovitz, Volker Schlöndorff. She has been teaching for twenty years. Lecturer and teacher at many higher education schools, she holds courses on film art direction and history of design. Associate professor at the Łódź Film School and the Academy of Fine Arts in Warsaw where she runs an independent laboratory of material culture and mores. In 2014 she was decorated with the Golden Medal for Merit to Culture – Gloria Artis and the Order of Polonia Restituta, Fifth Class. In 2018 she was honoured for her teaching with the Special Golden Dinosaur Award for the Outstanding Artist and Pedagogue.

Bożena Dykiel
She graduated from the National Academy of Dramatic Art in Warsaw. Immediately after graduating she joined the STS theatre where in 1972 she played the role of Sexy in the first staging of Janusz Głowacki’s Adultery Punished. Between the years 1973–1985 she played at the National Theatre in Warsaw and on the stage of Teatr Mały under the artistic supervision of Adam Hanuszkiwiecz. Her major parts include: Fredro’s Pierwsza lepsza, the Bride in The Wedding, Goplana in Słowacki’s Balladyna, Helena in Garczyński’s Wacława dzieje, Telimena in Mickiewicz’s Pan Tadeusz. She played the main part of Rosalind in Shakespeare’s As You Like It directed by Minc. She has also performed in privately-owned theatres, she has played numerous parts for children and young adults in fairy-tales. Before she performed on a theatre stage, she appeared in Janusz Zaorski’s film To Run Away As Near As Possible, and later starred alongside Marian Opania in the same director’s film, Promotion. She played in over seventy films, the most significant ones including: The Wedding, The Promised Land, The Shadow Line, Man of Iron, Holy Week, The Possessed – all of them directed by Andrzej Wajda.

Piotr Dzięcioł
Film producer. He graduated from the Faculty of Law of the University of Wrocław and from Film and TV Production Organization of the Łódź Film School. In 1991 he founded Opus Film, a company producing commercials, documentaries and feature films, which was one of the first private companies of this kind in Poland at the time. Since 2004 he has been a member of the European Film Academy and of the Board of the Polish Producers Alliance. He also sat on the Council of the Polish Film Institute (2008–2011). He won a Border Gate Award at the International Festival of Film Producers Regiofun. In 2015 he received a BAFTA Award for Ida. For years he has associated his private and professional life with Łódź (in 2003 he received the title of the Łódź Inhabitant of the Year 2002). He is a producer and co-producer of over thirty feature films. The films he produced participated in the most significant international festivals (Berlin, Cannes, Venice) many times. The most successful films were Ida, produced by Opus Film in 2013, which won awards including an Academy Award, and Cold War – the winner of the Palm d’Or for Best Director at the 2018 IFF in Cannes.

Paweł Laskowski
Film editor. Member of the Polish Film Academy. He worked on editing all of Wojciech Smarzowski’s films. He took part in the creation of TV plays and series, including Kuracja, Klucz, Crime Detectives, Colors of Happiness, Komisarz Alex. Three-time winner of the Best Editing award at the Polish Film Festival in Gdynia for The Dark House, Traffic Department and The Mighty Angel.

Ilona Łepkowska
Film and television screenwriter and producer. She graduated from the Faculty of Management of the University of Warsaw and in Screenwriting from the Łódź Film School. She made her debut in 1983 with a screenplay of a TV film Holidays with Madonna. Author or co-author of such films as: By Touch, Kocham kino, Oh, Charles!, Hotch-Potch, Topsy Turvy, or Hotch- Potch II, Matrimonial Comedy, Never Ever!, Don’t Lie, Darling, Oh, Charles! 2, Miszmasz, czyli kogel-mogel 3. She was also the co-producer of the last four titles. Co-creator of TV series The Clan, For Better and for Worse, L for Love, Colors of Happiness, Century of the Guilty. She lectures at film schools and screenwriting courses. In 2016, she made her debut as a writer with a novel entitled Pani mnie z kimś pomyliła. For a few years now she has been a regular columnist for “Teletydzień”. This year she was chosen to be the President of the Screenwriters’ Guild of Poland.

Maria Sadowska
Defiant and uncompromising. She follows her own path, shuns sensation and publicity. Maria Sadowska has been present on the Polish music stage for over twenty years. Her versatility enables her to combine such different genres as jazz, funk, electronic music or pop. She is a recognised singer, director, composer and author of lyrics. She released eleven albums (including two in Japan). The breakthrough in her career was the Tribute to Komeda album (Golden Album) which found its place in the history of Polish music. She graduated from the Directing Department of the Łódź Film School and for years she has been successfully running film projects. Her feature-length debut, Women’s Day, had its premiere at the 2012 Gdynia Film Festival. It received many awards in Poland and around the world, including the Grand Prix at the 2012 Cottbus Festival of the East European Cinema. In April 2014 she released her album Jazz na ulicach (Golden Album). Her latest film, The Art of Love, had its premiere in 2017. It received lots of positive reviews and ranked top of the Polish box office. Currently she is working on her premiere material.

Nikodem Wołk-Łaniewski
Sound designer and sound engineer of dozens of feature, television and documentary films, and TV Theatre plays. Professor of Musical Arts. Born 1944. He collaborated with, e.g. Krzysztof Kieślowski, Andrzej Wajda, Jerzy Stuhr and Krzysztof Krauze. He was nominated for the Eagle award multiple times and he won the award for Best Sound in such films as Pan Tadeusz. The Last Foray in Lithuania (dir. Andrzej Wajda), The Primate (dir. Teresa Kotlarczyk) and My Nikifor (dir. Krzysztof Krauze). Winner of the Silver Plaque at the 1978 Polish Feature Film Festival in Gdańsk for sound in Hello, Fred the Beard. Member of the Main Board of the Polish Filmmakers Association, Chairman of the Sound Designers Circle. Member of the Technology Council of the Polish Film Institute. Among other distinctions, he was awarded the Gold Cross of Merit, the Order of Polonia Restituta, Fourth Class, and the Silver Medal for Merit to Culture – Gloria Artis.

Cinematographer, director. Member of the Academy of Motion Picture Arts and Sciences (AMPAS), the Polish Society of Cinematographers (PSC) and the American Society of Cinematographers (ASC). Two-time winner of the Best Cinematography award at the festival in Gdynia: first, for Aria for an Athlete and years later – for Summer Solstice. He worked with many outstanding directors such as Filip Bajon (Aria for an Athlete, Inspection of the Crime Scene 1901), Wojciech Marczewski (Shivers, Escape from the ‘Liberty’ Cinema), Agnieszka Holland (Washington Square), Michał Rogalski (Summer Solstice) or Pat O’Connor (Cal). Later he left for the USA where he shot American productions, including the cult film Galaxy Quest (dir. Dean Parisot). Recently he has been collaborating with Marek Koterski (Man, Chicks Are Just Different, 7 Emotions). A few years ago he directed his film The King of Life.

Jury of the Short Film Competition:

Kinga Dębska (Chairwoman of the Jury)
She graduated in Film Direction from FAMU in Prague and earlier in Japanese Studies from the University of Warsaw. She made several documentaries, including the Eagle-winning full-length The Actress about Elżbieta Czyżewska. For her feature debut The Rebound she won Best Screenplay at the 2010 Koszalin Debut Film Festival Young and Film. Her second feature, These Daughters of Mine, brought her artistic and box-office success, including the Audience Award, Journalists Award and Arthouse Cinemas Network Award at the Film Festival in Gdynia in 2015, along with many other awards in Poland and around the world. Her two latest films are Plan B and Playing Hard, the latter awarded with e.g. the Audience Award at the 2019 International Festival of Independent Cinema Mastercard OFF CAMERA in Krakow. She is also the author of books Moje córki krowy and Porozmawiaj ze mną. Her most recent project is a six-episode TV series for TVN entitled Szóstka.

Natalia Grzegorzek
She graduated from the Faculty of Applied Social Sciences of the University of Warsaw and from the DOK PRO Documentary Programme at Wajda School. President of the Board of Koskino. Producer of Łukasz Grzegorzek’s feature films Kamper (2016) and The Coach’s Daughter (2018). The Polish producer of Winter Flies directed by Olmo Omerzu (last-year’s Czech Oscar candidate). Member of the Directors’ Guild of Poland and the Polish Producers Alliance (KIPA). Currently she is working on new projects, including Łukasz Grzegorzek’s new film Tak ma być and on Skull Echo, a full-length feature debut by Julia Marcell, a vocalist, multi-instrumentalist and winner of “Polityka” Passport. Natalia Grzegorzek is a holder of the scholarship of the Polish Film Institute to participate in EAVE Producers Workshop in 2020.

Katarzyna Klimkiewicz
Director and screenwriter. Member of the European Film Academy. For many years she was a Board Member and the President of Film 1,2 Association. She is also the lead director of a popular Polish TV series First Love. She graduated in Directing from the Łódź Film School. She was a scholarship holder of the Binger Film Institute in Amsterdam. She made films in Berlin, Israel, the UK, Chile. Her short-length debut, Hanoi-Warsaw, won many awards in Poland and around the world, and the European Film Academy recognised it as the Best Short of 2010. She made her feature-length debut with her film Flying Blind, which received the Grand Prix Great Amber Award, Best Directing and Journalists Award at the Koszalin Debut Film Festival Young and Film.

There will be also extra-statutory jurors debating during the Festival: Youth Jury, selected by the National Film Archive – Audiovisual Institute, and the Jury of the Polish Federation of Film Discussion Clubs. Information on their composition is available on the Festival’s website.