Jury of the 45th PFF 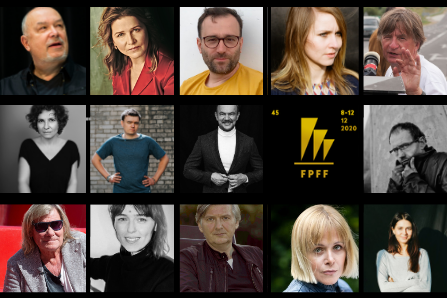 We already know the names of the jurors who will decide who will receive the Grand Prize of the 45th Polish Film Festival “Golden Lions” for the best film, as well as other prizes in three competitions.

Lech Majewski – Chairman of the Jury

Painter, poet, prose writer and director. Born in Katowice. Since 1981, Majewski spends most of his professional life abroad. Graduated in Painting from the Academy of Fine Arts in Krakow and from the Film and Television Direction Department of Lodz Film School. His films The Knight, Wojaczek, Angelus, The Garden of Earthly Delights, The Mill and the Cross and Onirica, to name but a few, received many awards at film festivals in Cannes, Venice, Berlin, Toronto, Rome, New York, Rio de Janeiro, London, Barcelona, Jerusalem and Montreal. His video art, photographs and sculptures were exhibited in museums and galleries around the world. In 2006, the Museum of Modern Art in New York honoured his achievements with a retrospective. A year later, his installation Blood of a Poet was selected for the 52nd La Biennale di Venezia. The following video art cycle titled Bruegel Suite was exhibited in Louvre, Tel Aviv Museum of Art, National Gallery in London, Museo Nacional del Prado in Madrid, National Museum in Krakow and at the 54th La Biennale di Venezia. His latest cycle Supermarket Dante was a part of the world exhibition of contemporary art at Fundiçao Progresso in Rio de Janeiro. Majewski has delivered lectures at many academic institutions, from Canterbury University in New Zealand, through Harvard and Berkeley in the US, to the University of Pisa and Rome University of Fine Arts. Member of the Directors Guild of America and Academy of Motion Picture Arts and Sciences.

Composer and sound engineer. Author of a sound installation for the architectural project Hotel Polonia. The Afterlife of Buildings, winner of the Golden Lion for Best National Participant at the 11th International Architecture Exhibition in Venice in 2008. Polish Radio One recorded his solo concert played in the basement of Chłodna 25 Café Club and broadcasted it as part of Ars Acustica, its annual fusion of radio stations from all over Europe in celebration of the art of sound. Composer for theatre plays Berlin Alexanderplatz (dir. Natalia Korczakowska, Teatr Studio), Natan Mędrzec [Nathan the Wiser] (dir. Natalia Korczakowska, Teatr Narodowy), Uwodziciel [The Seducer] (dir. Katarzyna Warnke, Nowy Teatr) and Auto da fé (dir. Paweł Miśkiewicz, Stary Teatr). In 2019, Lenarczyk collaborated with AUKSO, one of the most important Polish chamber orchestras. Polish Radio One recorded and broadcasted their concert titled Greek Funeral. As a sound engineer, he produces the sound in films, form sound design at the stage of screenwriting, through recording on set and postproduction, to sound mixing. Much-awarded at festivals in Poland and abroad. Recipient of the award for sound in Marek Lechki’s Interior at the 2019 PFF in Gdynia. Nominated to the 2016 Polish Academy Award for Best Sound for his work in The Lure (dir. Agnieszka Smoczyńska).

Director of photography. In 1974, he graduated from the Direction of Photography and Television Production Department of Lodz Film School, where he delivers lectures since 2004. In 2010, Lenczewski received Professorship. DOP for over fifty feature films shot in Poland, Great Britain, France and the US. Winner at the Polish Film Festival in Gdynia and Camerimage. Recipient of the BAFTA and BAFTA Cymru and two lifetime achievement awards: Golden Camera 300 at the 2015 Manaki Brothers International Cinematographers’ Film Festival in Bitola and the 2020 Polish Society of Cinematographers Award. Decorated with the Gold Gloria Artis Medal for Merit to Culture in 2018. Academy Award-nominee. Member of the British Academy of Film and Television Art, European Film Academy and Academy of Motion Pictures Arts and Sciences.

Writer. Born in 1983. Author of the controversial Snow White and Russian Red, which brought her the Polityka Passport Award, Nike Literary Award-winning novel Paw królowej and theatre plays, A Couple of Poor, Polish-speaking Romanians and All is Right Between Us, staged around the world. In 2018, she published Other People, a novel adapted for stage a year later by Teatr Rozmaitości in Warsaw and soon to be a feature film. Recipient of the 2020 Samuel Bogumił Linde Preis. Columnist for Dwutygodnik and Tygodnik Powszechny. Host of a radio podcast in Radio Newonce. Lives in Warsaw.

One of the most promising Polish directors of the young generation. Graduated from the Faculty of Radio and Television of the University of Silesia in Katowice and completed DOK PRO Programme at Wajda School. His films screened at Polish and foreign festivals. Author of the much-awarded documentary Deep Love. His first full-length feature The Last Family, dubbed “artistically most mature debut in the recent seasons”, became a phenomenon much-awarded in Poland and abroad. Recipient of the Golden Lions, Journalists Award and Audience Award at the 2016 Polish Film Festival in Gdynia, the film also received the Golden Angel at the 2016 Tofifest IFF in Toruń, the Prize for Best Debut Film at the 2016 Cottbus Film Festival and the Krakow Film Award at the 2017 OFF CAMERA International Festival of Independent Cinema in Krakow, to name but a few. Director of such TV series as The Border, Druga szansa (season 4) and Nielegalni. In 2020, Matuszyński directed The King, a serialised adaptation of Szczepan Twardoch’s novel. He’s currently working on his second full-length feature Leave No Traces, a film about the case of Grzegorz Przemyk.

Comedian and one of the most popular and beloved Polish actors. Graduated from the Acting Department of Lodz Film School. Played in over sixty Polish, Austrian and German films. Multi-time winner of the Film Magazine Golden Duck Award. Two-time winner of the award for an actor in a supporting role at the PFF in Gdynia, in 1991 and 1995. His role in Pigs 2: The Last Blood brought him the award at the 1995 Valenciennes International Festival of Action and Adventure Films. Worked with Andrzej Wajda, Krzysztof Kieślowski, Juliusz Machulski and Władysław Pasikowski. Pazura gave his most memorable performances in Sztos, Boys Don’t Cry, Career of Nikos Dyzma, Kiler, Ajlawju and Happy New York. His directing debut produced by his own production company Cezar 10, gangster comedy Weekend, premiered in cinemas last year. In January 2012, the company released a sequel to the comedy hit Sztos, where he plays one of the leading roles.

Producer of such films as High Life directed by Claire Denis starring Robert Pattinson and Juliette Binoche, Mr Jones directed by Agnieszka Holland and much-awarded international co-productions Rams and The Innocents. She’s currently working on Aleksandra Terpińska’s debut Other People, Brady Corbet’s The Brutalist and Agnieszka Smoczyńska’s first English-language film The Silent Twins. Member of the European Film Academy and the Board of Producers Guild of Poland.

Jury of the Microbudget Film Competition

Filip Bajon – Chairman of the Jury

Film and theatre director, screenwriter and author. Graduated from the Film and Television Direction Department of Lodz Film School. Author of over twenty feature films, documentaries and TV series. Recipient of numerous awards for such films as Aria for an Athlete, Inspection of the Crime 1901, Shilly-Shally, The Magnate, Poznań 56 and The Butler. Head of Kadr Film Studio since 2015. Board Member of the Polish Filmmakers Association. Lecturer at the Faculty of Radio and Television of the University of Silesia in Katowice and Lodz Film School, where in 2008–2016, he was Dean of the Film and Television Direction Department.

Director of photography for film. Two-time winner of the award for cinematography at the Polish Film Festival in Gdynia, recipient of the Bronze Frog at Camerimage and three-time Polish Academy Award-nominee. Member of the Polish and European Film Academy. Director of feature and documentary films, lecturer. His documentaries received numerous awards at festivals in Berlin, Krakow, Nyon, Karlovy Vary, Chicago, Leipzig, Tampere, Tehran and Trento, to name but a few. His feature debut The Red Spider screened at many international festivals and won, among other things, the Special Award of the Jury at the 2016 Polish Film Festival in Gdynia.

Jury of the Short Film Competition:

Aneta Hickinbotham – Chairwoman of the Jury

Film producer. Joined Aurum Film in 2015 as an executive producer. Member of the Polish Film Academy and European Film Academy. Graduated in Film and Television Production Organisation from the Faculty of Radio and Television of the University of Silesia in Katowice. Worked on such Polish films as Pan Tadeusz and The Pianist before perfecting her producing skills on the Hollywood sets of Troy (dir. Wolfgang Petersen), Munich (dir. Steven Spielberg) and The Legend of Zorro (dir. Martin Campbell). Together with Leszek Bodzak, they received the Golden Lions at the 2016 Polish Film Festival in Gdynia for the film The Last Family (dir. Jan P. Matuszyński), which also brought them the Polish Film Institute Award for the Producer of the Best Polish Film at the 2016 Warsaw Film Festival. The 2020 Polish Academy Award-winner for Corpus Christi (dir. Jan Komasa).

Writer, screenwriter and film producer. PhD in English Philology. Author of numerous screenplays for feature films and TV series, such as Days of Honour and Ziuk. Young Pilsudski – Conspirators. Author of the trilogy Wyspa zero. Two-time winner of the award for screenplay at the PFF in Gdynia.

Director and screenwriter. Graduated from the Academy of Fine Arts in Wrocław in 2006. In 2004, she received the scholarship of the Aristotle University of Thessaloniki and in 2012 – of the Minister of Culture and National Heritage. Graduated with honours from the Film and Television Direction Department of Lodz Film School in 2018. Her films screened at such events as Karlovy Vary IFF, Hot Docs, Festival de Cannes, Court Métrage, New Horizons and Brooklyn Film Festival. Her short film Such a Landscape won the Laszlo Kovacs Student Award – The Golden Tadpole at the 2013 Camerimage. Her film Tower. A Bright Day brought her two individual awards, for directing debut and screenplay, at the 2017 PFF in Gdynia. In 2018, the film was selected for Forum, a prestigious section of the Berlin International Film Festival. Recipient of the 2018 Polityka Passport Award for Film. The same year, she finished her second full-length film, Monument (Special Award at the 2018 PFF in Gdynia). Already a lecturer in Feature Film at Lodz Film School, this year, she also joined the staff of the Academy of Fine Arts in Wrocław. Vegan. Friend of the organisation Otwarte Klatki fighting animal cruelty and neglect.