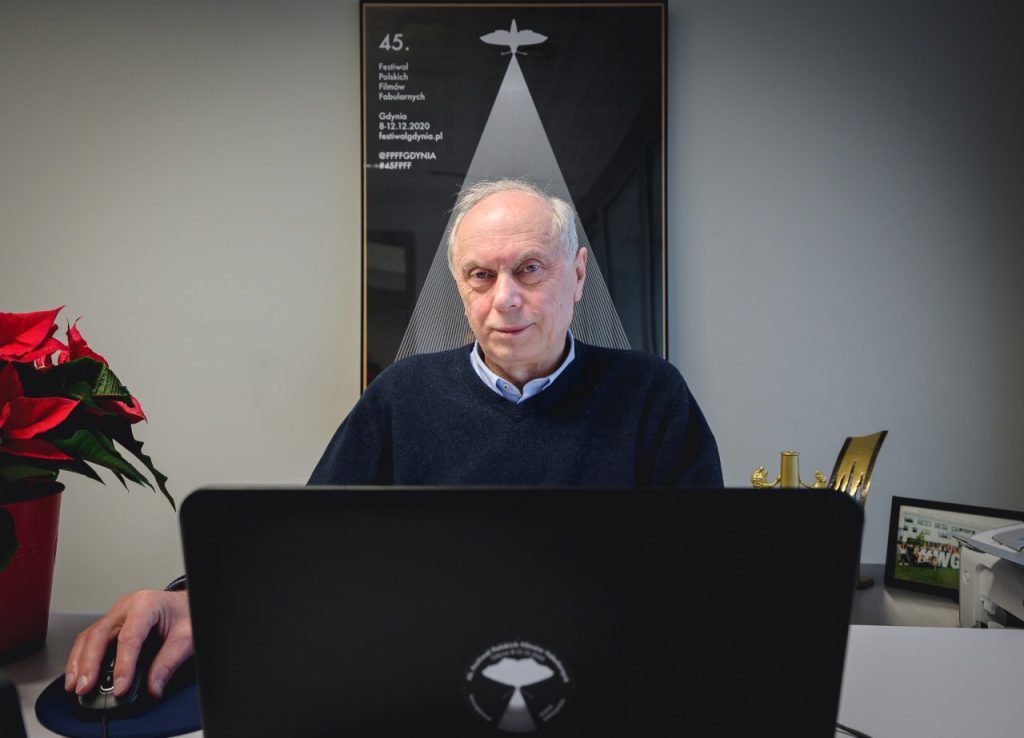 – We should believe that in the coming months we will manage to return to the traditional form, which gives us the opportunity to experience, discuss and feel emotions together when we are in a real, not virtual, darkened room, on the red carpet illuminated by spotlights, or in the audience of the theatre during the gala ceremony – says Leszek Kopeć, director of the 45th Polish Film Festival.

Katarzyna Siewko: On the eve of the festival, how does it feel to observe Gdynia at this and no other time of the year, devoid of festival goers and numerous guests?

Leszek Kopeć: It’s a sad feeling. Gdynia Film Centre http://gcf.org.pl/ is not entirely deserted. The jurors are working. After watching the films, the jury of the Short Film and Microbudget Film Competitions have already returned home, and from Saturday (December 5 – ed.) The films in Gdynia are watched by the jury of the Main Competition. In addition, a dozen or so people work all the time, but the surroundings are empty and we are sad to be functioning almost exclusively in the virtual world.

Is there a place for a sense of joint mobilization and motivation?

We’ve had a mood swing over the past few months. Extreme decisions were made – such as to cancel this year’s festival at all, or to postpone it to spring or even next year’s fall. This would mean the realization of the festival “two in one”, which would be dangerous for the festival itself, its capacity. We would have to take into account twice as many films submitted to the main competition and to the other competitions. Extending the festival by days is very costly. Important for us was also the appeal of the film community, which at all costs, even in a limited version with limited access on a digital platform for a few people, wanted the festival to take place. The main goal of the festival in this form is to award films, which is also important for the economic situation of filmmakers. Promotion is also crucial. Despite the pandemic, the media is active, and the number of accredited journalists is large. Therefore, we are in full mobilization and working really hard. It will be like that for the next few days.

How many different scenarios for the organization of this edition have passed through the hands of you and the organizing committee?

At least four. The first was to postpone the date, the second to cancel the festival, the third – a hybrid, and the fourth and final, is actually 100 percent online.

You have been the festival director since 2000, has it ever been so hard?

There were two critical moments. The first is 2001, September 11. The festival then froze. All participants, guests and artists, in solidarity with the United States and concerned with the whole tragic event, watched the reports on TVs set up in the foyer of the Musical Theatre and wherever it was possible. They stopped going to movies and participating in festival life. The festival continued, it was not interrupted, but after all, we expressed solidarity with the huge number of victims and the United States, which experienced something so unexpected. The second such difficult event was the death of Marcin Wrona on the last day of the festival a few years ago (in 2015 – ed.). The Closing Gala needed to be planned anew. The realization team of Telewizja Polska reacted quickly. This gala was considered extremely poignant and touching. We were all depressed and in a heavy mood, but the festival took place. We are all experiencing a pandemic today. In the spring of this year, no one has been able to estimate that it will take this size. However, the will of most of the organizers was to make the 45th edition happen and ensure continuity of the festival.

When was the decision to organize the festival in the present formula made?

At the beginning of September, a decision was made to make it in December in a hybrid format. We decided to make the festival online at the beginning of November. We were prepared with many works and already advanced in many processes. Preparatory work was carried out in parallel, taking into account that such a version may be reached. Nevertheless, five weeks before the festival, the decision to switch to the virtual festival was not easy, believe me.

Accreditations have been made available only to representatives of the industry and the media. Can you tell us about the backstage of these decisions?

A large part of the films that are in the competition are films waiting for their cinema premieres, and some of them are also ahead of the festival screenings. Therefore, any leakage is extremely risky, and you cannot protect yourself against it, despite the standard security measures taken by our digital platform, and multiplied ones. Including network monitoring, tagging copies by displaying the IP address on the screen. This would allow to reveal possible pirates but only after the film was leaked. Therefore, they should avoid the desire to disseminate films on the web. Despite these safeguards, you need to understand the distributors and producers who could not agree to make all their movies available to a wide audience. We understood. When choosing the lesser evil, which is holding a festival without regular audience, it was better to realize it than to completely surrender and give in.

How many people will be able to watch movies then?

A maximum of 2000, and in the case of the most limited films – several dozen.

And what was planned for people who sympathize with the festival for years, love Polish cinema, but will not see the films presented in Gdynia this year?

There was a concept proposed by the artistic director, which was valid only a month and a half ago. It set up extensive festival replicas in many places in Poland. This arrangement was readily accepted by multiplex cinemas and studio cinemas, which are the subject of our special care. Distributors and producers also agreed due to the greater security of film copies when screened in DCP cinemas. Unfortunately, we have to move this plan in time. The entire festival setting, virtual meetings with filmmakers and films that potential festival participants have not seen this year will be shown in cinemas in Poland when these cinemas open. Also, please do not forget that six films from the Main Competition have already had their cinema premieres and were available to those who are interested in Polish cinema.

We are talking about changes caused by the pandemic, but there were more of these changes. The Festival has a new artistic director, Tomasz Kolankiewicz, and there is a novelty among competitions – the Microbudget Film Competition.

The Microbudget Film Competition was initiated by the Polish Film Institute. It aims to strongly promote those who make their debut in rather peculiar conditions, because it is a microbudget film, and when making a full-length film it is a big challenge. This is the way for a film school student who made a 30-minute film to be able to prove himself on a budget and rather small scale. The competition is the idea of ​​director Radosław Śmigulski and it may be continued. It can be defined as a microbudget debut competition. The art director also realized some of his ideas. One of them is the Gdynia for Children program – youth cinema with absolute classics. We also have a Pure Classics section in the program. There is an interesting set of films, including Pilot Pirx’ Inquest, which was once a cult film based on the prose of Stanisław Lem. We are also continuing the events called the broad term “Gdynia Industry”. It is a program that is constantly evolving and adapting to the expectations of the environment.

Do you anticipate that the festival and event industry will have to undergo thorough changes in order to adapt to the new circumstances, or will we meet again in the cinema next year?

I would very much like us to meet at the cinema much earlier, and at the festival in Gdynia in nine months. For several years, the first attempts to transfer certain activities to the virtual world have already been made by us. Press conferences with the authors were freely available on the web. We can do the same with a few other events which, for obvious reasons, do not allow many thousands of people to fit into the rooms at our disposal.

What does it mean for the industry, for the organizers, and finally for you as a long-term director of the Polish Film Festival, to organize this year’s festival despite difficulties?

A change in the approach to participating in cultural events as long as the pandemic continues. At the same time, we should believe that in the coming months we will be able to return to the traditional form, which gives us the opportunity to experience, discuss and feel emotions together when we are in a real, not virtual, darkened room, on the red carpet illuminated by spotlights, or if we are sitting in the theatre audience during a gala ceremony.

The editorial office of the Klaps Festival Newspaper