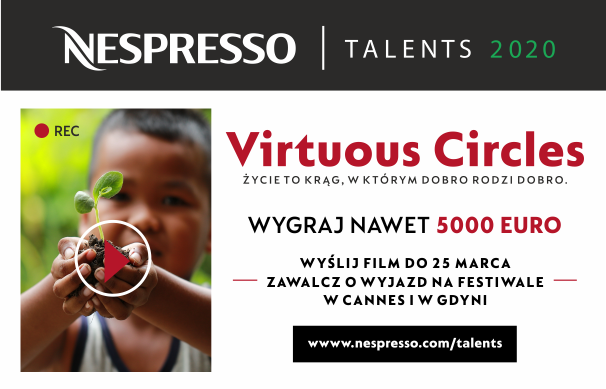 The deadline for submitting films for the Nespresso Talents 2020 competition will be extended. We will inform you soon about the new date.

Nespresso Talents is an international film competition organized for the fifth time by the Nespresso brand, which this year takes place under the slogan of Virtuous Circles, interpreted as Life is a circle in which good breeds good. Films with a length of 2 to 3 minutes can be submitted on the competition platform until March 25, 2020.

The main prize is 5000 euros and a trip to the Cannes International Film Festival. For the first time, the competition also has a Polish edition with a finale at the Polish Feature Film Festival in Gdynia, where prizes will be presented, including the main prize of EUR 1,500.

In mid-April, a shortlist will be selected, followed by three winning films selected by the Polish Jury composed of: Małgorzata Kożuchowska, Kinga Dębska, Anna Zoll and Łukasz Maciejewski.

Nespresso Talents is a film competition in which everyone can participate – both students of film schools, as well as amateurs who are close to film art.

The theme of this year’s edition is: Virtuous Circles, interpreted as Life is a circle in which good breeds good. Change for the better begins in the minds of people, from dreams of a better world and often has the dimension of a small inconspicuous step. There are many people in the world who are involved in important social issues to solve important problems and thus increase the chances of the world becoming a more friendly place to live. It is these stories – authentic (taken from life) or fictitious (being the product of the artist’s imagination) – trying to capture the process of change for the better, the source of which may lie in an inconspicuous gesture, movement, event, are to tell this year’s films. Cinema inspires by showing a fragment of reality, but also the imagination of the creators can infect to positive action. It is important to think broadly, carefully watch the world, reach for your dreams of a better tomorrow, think about what is important.

By working with young filmmakers, Nespresso continues its commitment to tackle socially important topics and make changes for the better. It is also worth adding that this year every film sent to the competition will lead to the planting of ten trees by Nespresso in partnership with PUR Projet.

Films for the Nespresso Talents competition can be submitted from February 11 to March 25, 2020 at https://www.nespresso.com/talents/pl/pl/contest. The finalists of the international edition will receive cash prizes: 5000 euros for first place and 3000 euros for second place and 2000 euros for third place.

In addition, the winners of the winning films will be guests of the Cannes International Film Festival, where the results of the competition will be officially announced, and awards will be presented. On the other hand, the winners of the Polish edition will be honoured with prizes in the amount of: 1500 euros (first place), 1000 euros (second place) and 500 euros (third place), which will be presented during the Polish Feature Film Festival in Gdynia.

Nestlé Nespresso SA is a pioneer and reference point on the market of the highest quality portioned coffee. The company cooperates with over 70 thousand farmers in 12 countries as part of the AAA Sustainable Quality™ program, which aims to implement the principles of sustainable development in and around plantations. Created in 2003 in cooperation with the Rainforest Alliance, the program allows you to improve the quantity and quality of crops, ensuring sustainable production of high-quality coffee and improving the quality of life for growers and their communities.

Nespresso’s head office is located in Swiss Lausanne, and the company operates in 69 countries and employs over 12,000 people. In 2016, the Nespresso sales network included over 600 branches. More information is available on the Nespresso company’s website: https://www.nestle-nespresso.com/