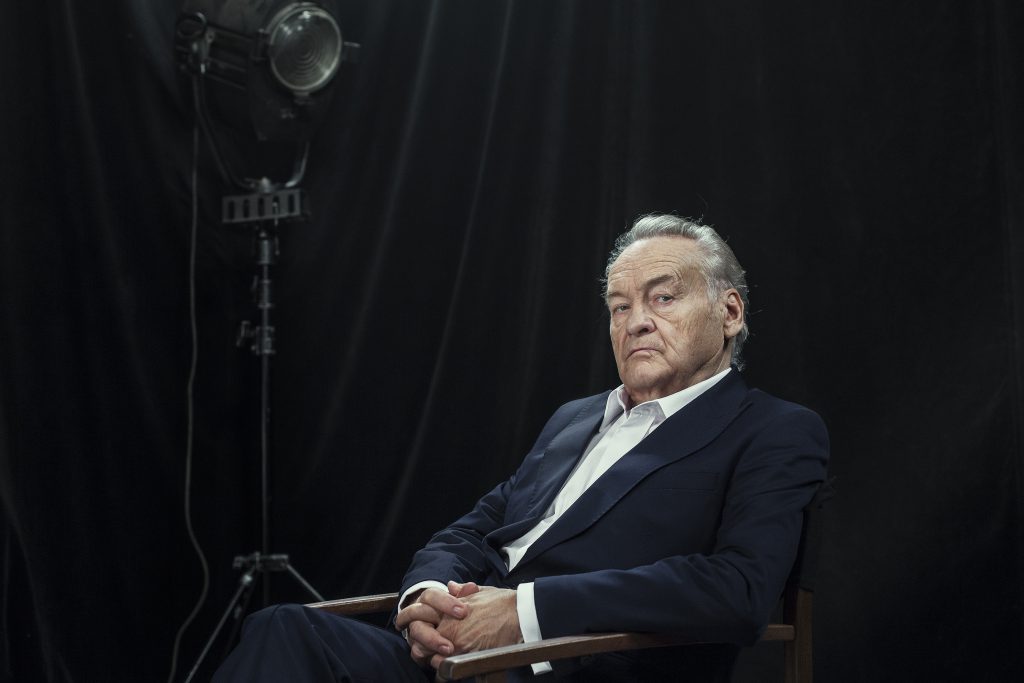 Jerzy Skolimowski – a director, screenwriter and film actor, poet and painter – will receive the statue of the Platinum Lions during the finale gala of the 43rd Polish Film Festival in Gdynia, on Saturday, 22nd September 2018.

Platinum Lions is an award granted every year by the Organizing Committee of the Festival to honour the entirety of work of outstanding artists. It has been given to, among others, Andrzej Wajda, Jerzy Antczak, Sylwester Chęciński, Tadeusz Chmielewski, Tadeusz Konwicki, Janusz Majewski, Roman Polański, Witold Sobociński, Jerzy Wójcik. Last year, it was given to Jerzy Gruza.

Jerzy Skolimowski was born on 5th May 1938. During his education in a junior high school in Prague, where his mother was a cultural attache, he met his peers – Milos Forman and Vaclav Havel. His first film steps were made in his hometown Łódź, where he studied directing in the Łódź Film School. Already his school short films gained attention of the critics. The film “Boks” was awarded the Grand Prix at the IFF in 1962 in Budapest. Skolimowski had a lot of knowledge on this topic as he was into sports himself. As a poet, he debuted in 1957 with his poem “Moje rundy” published in Nowa Kultura. He has published a few poetry sets, he is also the author of theatre plays.

Right after his studies, he was a co-screenwriter of films such as “Niewinni czarodzieje” (1960) directed by Andrzej Wajda or “Nóż w wodzie” (1962) by Roman Polański. Skolimowski’s directing debut is “Rysopis” (1964) which was made with the use of a few earlier student films of his. The master of the French new wave, Jean-Luc Godard, is said to have stated that in cinema, he has already tried everything but still, Skolimowski’s films, with “Rysopis” at the top, have let him discover something new.

Jerzy Skolimowski has earned the right to be called the top representative of the film move from the mid 60’s of the previous century. The so called “third Polish cinema” was supposed to come after the generations of Jakubowska and Ford as well as Wajda, Kawalerowicz, Has and others. The protagonist of the first films by Skolimowski was not appreciated by the part of the critics that expected from the film – in accordance with the then requirements of the authorities – grasping the theme in a social perspective, and considered any individualism inappropriate. It was a protagonist, as described by Konrad Eberhardt, quoted by Culture.pl, defying maturity, escaping the scheme.

“Escaping, getting lost, searching,” Tomasz Jopkiewicz writes in „Kino”. “Taking on numerous faces and masks. Looking for own form. And fear, at the same time, of losing what is one’s own, having it taken away. Of surrendering. A fight for the right to make mistakes, to find and lose again the points of reference, stable anchors. These are the dilemmas that Skolimowski’s protagonists were faced with. They were not new, in the cinema of the 60’s, they were quite often. But it is this director who, thanks to his personal style, was able to extract them in the best manner. He used to lean on the unrepeatable, he effaced the border between biography and his protagonist, he created a kind of a lyrical, auto-ironic diary.”

The word „diary” is not a coincidence. The plot of Skolimowski’s films was mainly auto-biographical. The screewriter and director in one person identified himself with the protagonist, and in his two first films, he personally created the figure of Andrzej Leszczyc. In “Bariera” (1966) he had to resign from this at the request of an office clerk deciding on this. In Skolimowski’s films, the critics appreciated the same as Godard’s “faithfulness to the real world”; however, in the Polish filmmaker, it finds an authorship aspect.

In 1969, Jerzy Skolimowski left Poland. His next films were made in England, Italy and Hollywood. There were the following: „Start” (1967), „Na samym dnie” (1970), „Wrzask” (1978), „Fucha” (1982), „Latarniowiec” (1985). They won awards, among others, at festivals in Berlin, Cannes or Venice. His output includes such films as „Wiosenne wody” (1989) nominated for the Golden Palm and „Ferdydurke” made in 1991 based on the text by Witold Gombrowicz. Later on, the artist focused on painting and poetry. „Cztery noce z Anną” (2008), with the glamorous role of Kinga Preis, which won the hearts of critics and viewers, turned out to be his spectacular return to the film. Both did not have to wait long for another outstanding film.

“Essential Killing” (2011) is a story of an Afghan, a runaway from a US prison located somewhere in the middle Europe, who has to fight a dramatic battle for survival. Jerzy Skolimowski, as he has convinced in interviews, wrote the screenplay in but a couple of days, moved and inspired with the press news about the alleged secret prisons of CIA located in Poland. The critics embraced Skolimowski’s film with appreciation. “’Essential Killing’ is made perfectly. The unusual photogaprhy by Adam Sikora make the viewer feel the heat of the desert and get lost in the snowy spaces; the discreet music by Paweł Mykietin multiplies the feeling of anxiety. The main role actor – Vincent Gallo – is brilliant, almost animal-like. (…) Skolimowski dares the viewer. He rouses them from stereotypical thinking. He disturbs. He is controversial. He provokes,” wrote Barbara Hollender in “Rzeczpospolita”.

The film won the Golden Lions at the Polish Film Festival in Gdynia in 2011, as well as awards for the best director, the best author of music (Paweł Mykietyn), the director of photography (Adam Sikora) and editors (Maciej Pawliński, Réka Lemhényi).

This is not the only relation of Skolimowski and the Gdynia festival. The film „Cztery noce z Anną” received in 2008 individual awards for the best scene direction (Marek Zawierucha) and sound (Gérard Rousseau, Frédéric de Ravignan, Philippe Lauliac). The last film, „11 minut” (2015) participated in the Main Competition of the 40th PFFF. It won the Special Award of the Jury, as well as awards for editing (Agnieszka Glińska) and music (Paweł Mykietyn). In 1981, when the Festival was still held in Gdańsk, the film „Ręce do góry”, held back from 1967 by the censorship, won the Journalists’ Award.

During the 43rd Polish Film Festival in Gdynia, which will be held from 17th to 22nd September 2018, Jerzy Skolimowski will receive another award: the Platinum Lions.