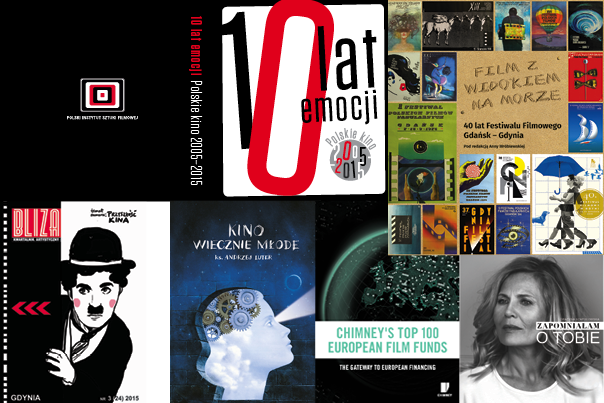 Gdynia Film Festival is not only an opportunity to promote Polish cinematography but also the literature related to film industry. This year’s edition of the Festival will be accompanied by the promotion of eight books and a special edition of a magazine.

“A FILM WITH A VIEW TO THE SEA. 40 YEARS OF GDYNIA FILM FESTIVAL” AND THE VIRTUAL FESTIVAL

“A Film with a View to the Sea. 40 Years of the Gdynia Film Festival” is a jubilee publication devoted to the history of the most important Polish film event. The publication will be available both in electronic form and as an album publication distributed among the guests of the 40th GFF. The meeting will be accompanied by the presentation of “Virtual Festival” project held by Anna Wróblewska – which is the Festival digital archive developed with the support of the Ministry of Culture and National Heritage.

Allan Starski’s “Production Design” is a tour through the magical world of cinematography guided by an outstanding Polish filmmaker, Academy Award winner, who has collaborated with the best directors including Steven Spielberg, Andrzej Wajda and Roman Polański. Starski presents his work in a passionate and direct way. He shares his professional expertise and discloses the backstage secrets of the greatest blockbusters. The book features many unique documents, drawings, sketches and film stills, which may be considered learning aids but above all – a feast for the eyes.

Father Andrzej Luter has selected a dozen or so films from the Polish People’s Republic period which are important to him from the axiological point of view. The films are not necessarily the greatest but subjectively most important ones. This sentimental journey to the past offers us a story within a story which is not devoid of criticism or irony but is at the same time nostalgic. This is a story of the Polish cinematography from that period and of the people who were young in the 1970s. As Luter puts it: “art cannot be real life but it is, or it should be, a way to understand life”. He himself used the described films to obtain a deeper understanding of life and the world. Promotion of the book will be accompanied by the book “How to be loved” (dir. Wojciech Jerzy Has).

“I’VE FORGOTTEN ABOUT YOU”, “BEYOND ME” AND “CHASING MEMORY” BY GRAŻYNA SZAPOŁOWSKA

The new book “Zapomniałam o tobie” (I’ve forgotten about you) is a selection of letters sent between Grażyna and Janusz over many years – from 1983 up to 1994. This is an evidence of passionate affection, filled with longing, craving and platonic love. Although they were hundreds miles away, Grażyna and Janusz shared the joys and worries of everyday life. Despite the fact they could not meet and had to communicate through letters and telephones only, they remained devoted to each other. The letters sent by Janusz express his great admiration for the female friend. Grażyna Szapołowska discloses the backstage secrets of her work as an actress, downsides of being a mother and the reality of living in the Polish People’s Republic. The book “Poza mną” (Beyond me) is a record of everyday life observed by the author in various places in Poland and around the world, including the streets of Warsaw, Delhi or Moscow, Dubai dessert, the beaches of Costa Rica and Portimao. “Ścigając pamięć” (Chasing memory) by Grażyna Szapołowska is an autobiographical novel guiding the reader through two parallel worlds. The author, in an extremely touching way, describes the last days of her mother – Wanda Szapołowska, on the other hand enriching the story with memories of the her fascinating life. The three books have been published by Burda Książki publishing house.

If a film critic was hibernated a couple of years ago and woke up now, he would be shocked. Not by the political turns and cataclysms, waterparks, motorways or unexpected victories of Polish sportsmen. Barely anything in Poland has evolved as much as cinematography. What has happened during those ten years that changed the opinion and position of the Polish cinema so much both locally and globally? How was this even possible? Wojciech Orliński, a journalist of “Gazeta Wyborcza”, tells this amazing story in his book “10 Years of Emotions. Polish Cinema 2005-2015”. At the meeting promoting the book, the author will be accompanied by Agnieszka Odorowicz – the General Director of the Polish Film Institute.

Chimney Group have been active in Poland since 1988. They specialise in comprehensive digital image mastering. They have offices in Sweden, Germany, Denmark, Singapore, Switzerland and Australia. They produce more than 6,000 films in 60 countries every year. This year, the company will present a second edition of their guide to European film funds which offers an in-depth analysis of tax incentives for film producers in 37 European countries. This publication will help all the interested people to check which country is most attractive from the taxation point of view. The second edition additionally contains information on the funds – their budgets, modes of project selection and financing schemes.

PROMOTION OF THE NEW ISSUE OF BLIZA MAGAZINE: “THE FUTURE OF CINEMA”

On the occasion of the anniversary edition of the Gdynia Film Festival, “Bliza” prepared an issue devoted to the “Future of the Cinema”. The authors ask questions about further way for the cinema and future formal and thematic routes for development. They also point to cinema growing, diminishing or simply changing influence on reality. Thanks to the collaboration of “Bliza” with the Academy of Fine Arts in Gdańsk, this issue has been enriched with pictures created by Wojciech Fangor.

GDYNIA FILM CENTRE, GOPLANA SCREENING ROOM, WEDNESDAY, 16TH SEPTEMBER. THE MEETING WILL BE HELD DURING THE DISCUSSION AFTER THE SCREENING OF “LESSON OF THE DEAD LANGUAGE” BY JANUSZ MAJEWSKI. SCREENING STARTS AT 6:30 PM

PROMOTION OF THE BOOK “THE WOMAN IN THE STORY: WRITING MEMORABLE FEMALE CHARACTERS” BY HELEN JACEY

The book “The Woman in the Story: Writing Memorable Female Characters” by screenwriter and academic teacher Helen Jacey published by Wydawnictwo Myśliński will have its premiere at the 40th Gdynia Film Festival. It’s the first such handbook worldwide devoted to the creation of female roles from a screenwriter’s point of view. “The Woman in the Story…” is innovative in introducing models of authentic main female characters and shows that there is much more to writing memorable women than a plain choice of sex. Screenwriters should consider many other elements, from differences in character development to gender issues. The book was co-financed by the Polish Film Institute and will be available in the bookshop of the Gdynia Film Centre.

40. This year’s edition of the Gdynia Film Festival will be accompanied by the opening of the Bookshop in the Gdynia Film Centre Gallery, offering numerous unique books and albums devoted to cinema and photography along with exceptional film editions on DVDs or Blu-rays. The new bookshop, located within the premises of the Gdynia Film Centre, will offer all the books promoted at 40th Gdynia Film Festival, including “Production Design” by Allan Starski, “I’ve forgotten about you”, “Beyond me” and “Chasing memory” by Grażyna Szapołowska, “Forever Young Cinema” by Father Andrzej Luter.