Pure Classics – In Memoriam at the 42nd PFF 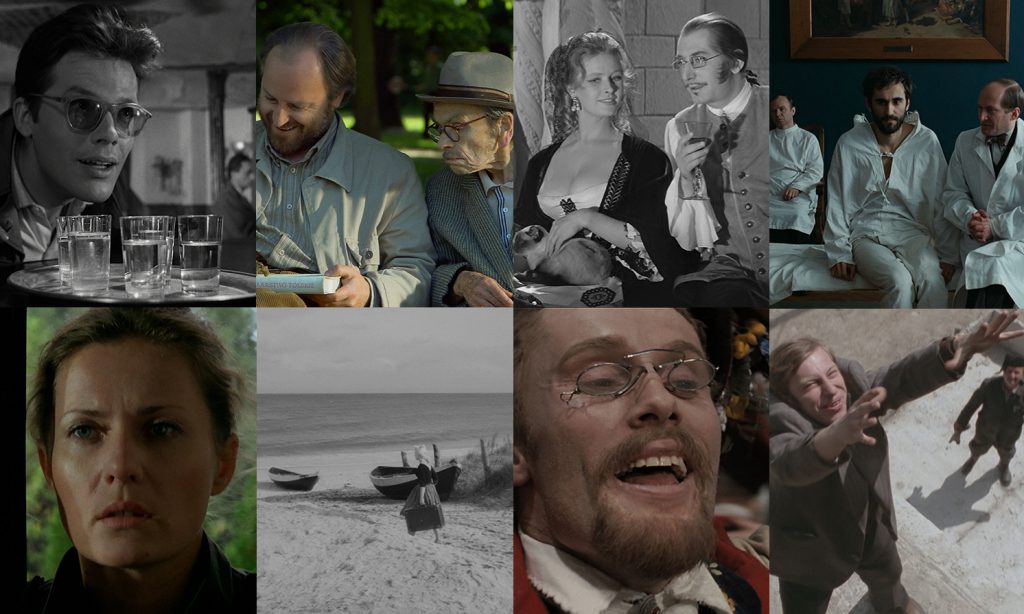 This is another edition of the “Pure Classics” section organised at the Polish Film Festival in Gdynia since 2008, presenting the digitally reconstructed canon of the Polish cinema.

The audience of the 42nd PFF will see the films of the filmmakers who died in the recent years – Andrzej Wajda, Krzysztof Ptak, Krzysztof Krauze, Witold Adamek. The Festival will also pay tribute to the memory of Zbigniew Cybulski and Jerzy Kawalerowicz in the anniversary of their death: the 50th and 10th respectively. Other films of the cycle will commemorate the figures of Edward Żebrowski and Krzysztof Kieślowski.

“Many viewers get back eagerly to the classics of the Polish cinema, which can be presented thanks to digital reconstruction. While others, especially the young ones, have the chance to watch these image for the first time in their lives, and even on the silver screen, during the Festival. That is why in my opinion, this programme section implements a certain important mission,” Leszek Kopeć, the Director of the 42nd PFF, says. “We fully devote this year’s Pure Classics to the In Memoriam theme, surrendering to the circumstances that the very life has brought to us. Unfortunately, we have to say goodbye to those who pass away and we should remember and recall them. It is also worth noting that thanks to this, debutantes, who are so numerous this year in the three competitions, collide with what has been done by their precedents. The Festival is thus a space of a very interesting inter-generational confrontation,” Leszek Kopeć adds.

In relation to the 50th death anniversary of Zbigniew Cybulski, the viewers of the 42nd PFF will see two films with the participation of the outstanding actor. The cycle will be opened with a digitally reconstructed “Manuscript found in Saragossa” (1964) dir. by Wojciech Jerzy Has. Also, a bit younger film, “Ashes and Diamonds” (1958) dir. by Andrzej Wajda, will be presented. It was thanks to that film that the 31-year-old Zbigniew Cybulski became a star of the Polish cinema.

The figure of the director who died in October last year will also be commemorated by a screening of a digitally reconstructed “Wedding” (1972). Andrzej Wajda was a special guest of last year’s Festival, during which the 90th birthday of the Master was celebrated. And in the 10th death anniversary of Jerzy Kawalerowicz, his “Train” (1959) will be presented; a film constituting one of the fundamental positions from the heritage of the so-called Polish film school.

As part of the section, two films directed by Krzysztof Kieślowski will be presented. His work was more widely presented in Gdynia a year ago. This time, “The Calm” (1976) and “A Short Film About Love” (1988) will be presented. The screening of the second title will pay tribute to the figure of Witold Adamek, an outstanding film operator, screenwriter and director, who died in February 2017.

One of the most important events of the Festival will be the screening of the film “The Calm” after digital reconstruction implemented by Telewizja Polska and financed from the resources of the European Union as part of the project “Digitization of the Polish Television and Film School from the Archives of TVP SA”. Telewizja Polska will share online 836 digitally reconstructed films free of charge. It is a review of many significant figures of the Polish cinema. The project involves feature films, series, documentary films and performances of the Theatre of Television.

The Festival review will be closed by the presentation of films of two directors who passed away in 2014. The programme of this section includes digitally reconstructed images: “Hospital of the Transfiguration” (1978) dir. by Edward Żebrowski and “My Nikifor” (2004) dir. by Krzysztof Ptak. Selected film screenings in Gdynia will be accompanied by meetings with special guests, co-makers of the films presented who will remind of their colleagues, friends, masters.

The Digital Film Repository is a partner of the section “Pure Classics – In Memoriam” during the 42nd Polish Film Festival in Gdynia. It deals with the professional management of digital copies of films, starting from their archivisation and storage, through the creation of templates, to distribution. As part of the “Pure Classics – In Memoriam”, the Digital Film Repository provides copies of digitally reconstructed films and takes care of the best screening quality.

In this year’s Festival programme, the “In Memoriam” cycle has been additionally enlarged with a number of special screenings. Next to the reference in “Pure Classics”, the figure of Andrzej Wajda will also be recalled by three unusual documentaries. “Andrzej Wajda is Watching Ashes and Diamonds” (2008) is a record of an unusual talk with the Master, held exactly 50 years after the premiere of his famous film, made by Marcin Borchardt and Jerzy Rados.

And the film “Andrzej Wajda: Let’s Shoot!” is a documentary record of the director’s work on the shooting location of the film “Katyń”. He was then accompanied by Maciej Cuske, Thierry Paladino, Marcin Sauter, Piotr Stasik (Zespół Filmowy Paladino), thanks to whom the viewers can now meet again with Andrzej Wajda at work. The documentary “Andrzej Wajda: My Inspirations” (2017) directed by the very Andrzej Wajda and Marek Brodzki concentrates on the painting aspect of the aesthetics of the Master’s films. In Gdynia, one of the television performances made by Andrzej Wajda: “Bigda is coming!” of 1999, will also be recalled.

The figure of Danuta Szaflarska who died in February 2017 will be paid tribute to by the screenings of two films directed by Dorota Kędzierzawska, in which the actress made unusual creations: “Time to Die” (2007) and “Another World” (2015). Barbara Sass will be recalled with a special screening of the film “Temptation” (1995) directed by her.

The Festival audience will familiarise themselves with two other late makers of the Polish cinema by special documentaries. “Mówili o nim Ptaszek” is the story of life and work of Krzysztof Ptak, told with the words of his friends and relatives, and made by his daughter, Aneta Ptak-Rufino. “Notatki z życia. Edward Żebrowski” directed by Maria Zmarz-Koczanowicz is a documentary film devoted to one of the most interesting Polish film directors. Also, his two film etudes will be presented: “School of love” (1963) and “Evening” (1964).

The programme of Special Screenings – In Memoriam will be complemented with the documentary film “Młynarski – piosenka finałowa” directed by Alicja Albrecht. It is a very personal, honest interview with the protagonist. The relatives and friends of the artist, including people of the cinema, are also present in the film. They include: Janusz Gajos, Janusz Głowacki, Jerzy Derfel, Janusz Sent, Włodzimierz Korcz, Ewa Bem, Janusz Stokłosa, Michał Bajor, Magdalena Zawadzka, Krystyna Janda.

More about the films of both sections: