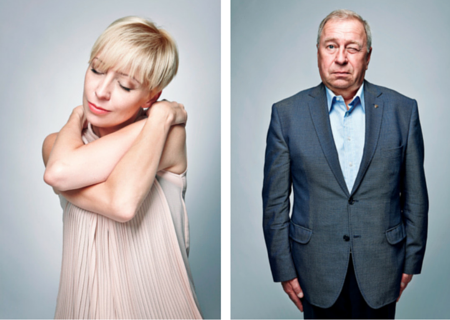 He has been photographing directors for 10 years. In a subtle way, he depicts the relation of the man and its creation. At the 41st Gdynia Film Festival, he will continue his project and we will see another edition of the Gallery.

The photographic project, implemented, inter alia, as part of the Gdynia Film Festival, comprises a cycle of portraits dedicated to films – and indirectly, to their directors. The mission of the undertaking is to record, in the photographic image, the moment of the presence of the top Polish films at the Festival.

The cycle comprises of a series of portraits of directors who kind of play the role of a replacement for the prominent idea of the project: the creation of a portrait of the films given the honourable mention. It is the ambition of the cycle to capture the atmosphere of a given film and to mirror it through an on-the-set relationship between the photographer and the director. On the one hand, the cycle refers to the annually selected top Polish films, and on the other hand, it is a token of an utopian desire: to portrait the very medium of the film.

Rafał Placek A photographer, a graduate of the Krzysztof Kieślowski Radio and Television Department at the Silesian University. He is active in the visual spaces of culture, business and industry – in the fields which directly change the reality. By portraiting places and people, he seeks their special character and intensity, which are the driving force of those transformations. The author of photographic projects at the Gdynia Film Festival, the Gdańsk Shakespeare Festival, the International Off Camera Independent Cinema Festival in Krakow, and the co-author of the Portrait Gallery at the Wrocław “New Horizons” Film Festival. The founder of the “portretbiznesu.com” visual brand. The animator of photographical workshops for young creators from the Tri-city.