Send a traditional postcard from the Festival! 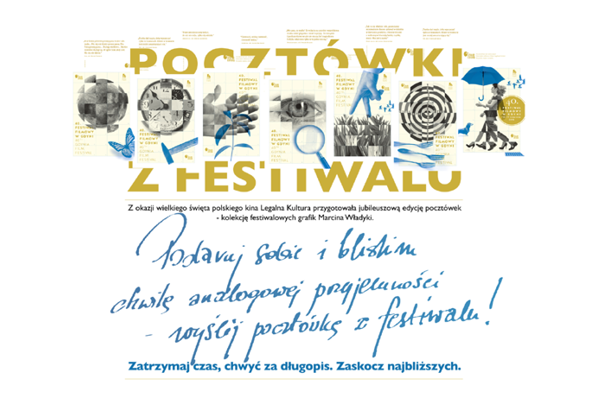 During the Festival, Legal Culture proposes something special for the enthusiasts of tradition: a jubilee edition of postcards, that is, a collection of seven various graphic pieces of work by Marcin Władyka with seven quotations from cult Polish films. In this way, we want to remind of the traditional manner of sending one’s regards and to encourage to practicing it.

Text messages, e-mails, posts are our daily form of communication. Photos from holiday are also rather posted on a social portal or sent via a smartphone than added to a traditional album. This was not always the case, though. The jubilee edition of the Gdynia Film Festival is a great opportunity to bring out memories and reflections related not only to the film but also to the things that are old-fashioned yet still valuable.

Make the time stop for a while, grab a pen and write something nice. Surprise your dearest ones and send them a postcard – give them a moment of analogue joy. In the Internet era, a traditional postcard is a real surprise, and one sent from the jubilee edition of the Festival – especially so.

It is often the case that we are discouraged by the effort related to the posting and we resign. Legal Culture addresses those difficulties. It will take care of the Festival postcards to make sure they really reach the addressees. Sending a traditional postcard has never been easier before – with no posting stamp and no queue at the post office!

The postcards await you in the Internet café of Legal Culture and nearby the Culture in the View installation.