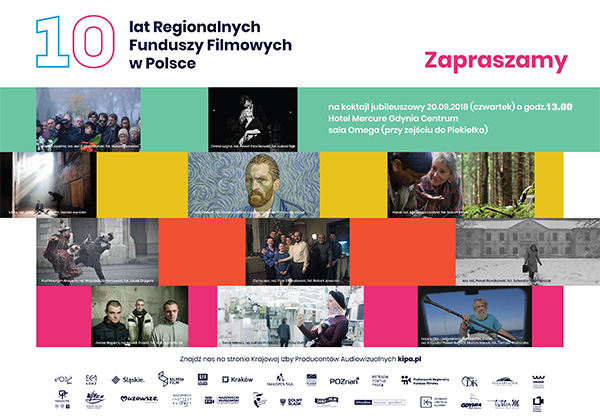 Due to the 10th anniversary of Regional Film Funds in Poland, the Polish Audiovisual Producers Chamber of Commerce and, operating within it, Regional Film Funds, which bring together all Polish film funds, invite to a jubilee cocktail during the Festival in Gdynia, which will take place at 1:00 p.m. in Gdynia Mercure Centrum (Omega room). This invitations is extended to everyone who possesses festival industry accreditation.

During the Festival in Gdynia, Regional Film Funds will be celebrating their 10th anniversary. Currently, there are eleven of them in Poland. Since 2008 the funds have supported financially 492 feature films, documentaries and animated films with the amount of more than 72.2 mln Polish zlotys. Together with the Polish Film Institute, they are the largest public partner co-financing Polish cinematography at the production stage.

Even though the first regional film fund was established in Lodz in 2007, the conference in Krakow in January 2008 is considered to be the starting point for Regional Film Funds, during which the representatives of the“old” European Union presented a long history of fund operation principles in their countries. In Poland, the initiators for the creation of funds who convinced local governments to found them were Agnieszka Odorowicz who, at that time, headed the Polish Film Institute, Maciej Strzembosz, the president of the Polish Audiovisual Producers Chamber and Jacek Bromski, the president of the Polish Filmmakers Association. By 2010, regional film funds were started by local governments in Łódź, Katowice, Wrocław, Gdynia, Poznań, Kraków, Szczecin, Lublin and Warsaw. During the last three years new funds were created in Rzeszów and Olsztyn. RFF are financed either jointly by provincial and municipal self-governments at the voivodeship level (e.g. Krakow, Wroclaw and Warsaw) or solely by municipal governments (e.g. Lodz) or voivodships (e.g. Katowice). A yearly budget of a fund has never exceeded 2 000 000 Polish zlotys. Most frequently it oscillates between 500 000 and 1 000 000 Polish zlotys per year. These are not bug sums but within a decade they have amounted to PLN 72 224 919, which supported 492 films, including 191 feature films, 254 documentaries and 47 animated films. Among these films there have been 76 international co-productions.

Polish funds, which have grown stronger over the last decade, fulfill the same tasks that similar funds anywhere in Europe. They promote a positive image of local regions and present unforgettable landscapes, places and architectural objects, often of unique scale in Europe. When funding selected films, the funds require that the shooting takes place in their region, at least for several days, and that local professionals and companies from the film industry are hired and that the provided funds are spent in the region. As a result, local businesses benefit considerably from producing films in their regions. During a decade, filmmakers using RFF support “left” PLN 103 mln in over eleven voivodeships. How popular the practice of co-financing films by RFF is is well visible when watching the opening and closing credits of Polish films. At this year’s festival in Gdynia, half of the films that qualified for the Main Competition was produced with the support of funds and two of the films used as many as four funds (“Cold War” by Paweł Pawlikowski) or three funds (“Pardon” by Jan Jakub Kolski). It is also worth noticing that the two last films (“80 Million” and “The Photographer”) made by the chairman of the jury of this year’s festival, Waldemar Krzystek, were created with the support of the Lower Silesian Film Fund, whereas “Little Moscow”, awarded with the Golden Lions, received a grant from the Lower Silesia regional government, which turned out to be a successful test run before establishing the fund in Wroclaw.

Summing up the ten-year long activity of Regional Film Funds one has to look ahead into the future and ask themselves about the opportunities and threats that lie ahead of their further activity. The opportunities are maintaining and developing funds through increasing their funding and autonomising operations as an institution. Both for identification reasons (currently every regional fund falls under the name of another local government institution), as well as the scope of activities, one should think about transforming funds into independent institutions (same as in Europe) or, at least, into structures with extensive decisive and personal autonomy. Such structures, beside supporting film and TV productions, could occupy themselves with film commissions and a full range of audiovisual services, which in voivodeships and metropolises are currently separated between various local government agencies and institutions. Among the threats the most serious one is local governments withdrawing from supporting funds. Another threat is the way of understanding the region’s promotion through the film. Is the Masurian countryside depicted in “Silent Night” by Piotr Domalewski not a promotion of the region? Masurian self-governments, may they be praised, considered it to be a promotion. It would be highly desirable that this way of thinking was to be found everywhere in Poland. The local government elections are approaching. Every new power, especially when political parties reshuffle, considers it a point of honour not to continue what their predecessors did well, but to change everything from people to structures. On behalf of people who, for ten years, have been building the Regional Films Funds from scratch, we call for consideration and reflection. Destroying something is very easy, but to build and develop is way harder.