The Festival Academy of the School Film Archive, that is – the FINA programme 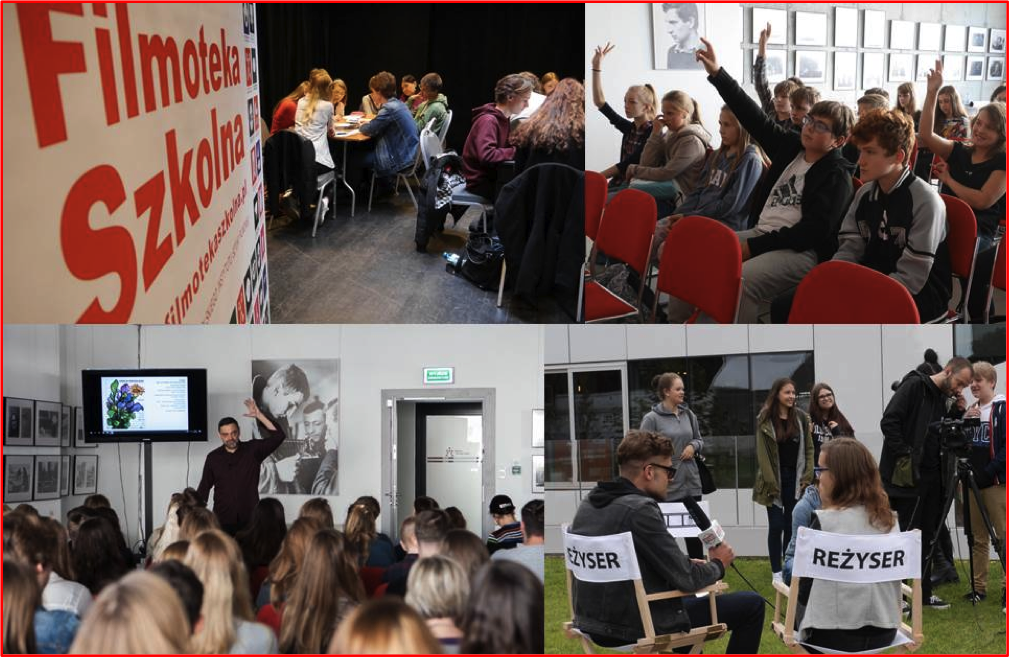 During the 42nd Polish Film Festival in Gdynia, for a fifth time, classes of School Film Archive will be held view teenagers in mind. The National Film Archive – Audiovisual Institute (FINA) has planned a cycle of debates, lectures and workshops based on the repertoire of the Festival and popularising the history of cinema.

The Festival Academy of the School Film Archive

The Festival Academy of the School Film Archive at the 42nd PFF is another edition of educational actions organised in Gdynia from 2013, the idea behind which is to build the future audience of the Festival and aware viewers of Polish cinemas. The participants will have the chance to see the films from the Main Competition (“The Damned One”, “Tower. A Bright Day”, “Be Prepared”, “The Best”), the Visions Apart Competition (“Double Trouble”), as well as selected titles presented in the Festival special sections (among others, the block of screenings “70 years of Polish animation”, “Time to Die”). By taking part and speaking up in the debates moderated by journalists and critics – among others, Michał Oleszczyk, Anna Bielak or Łukasz Adamski – the students will have the chance to confront their knowledge and opinions on the contemporary cinema with the stance of profesional film specialists, cinema lovers and peers.

Programme of the Festival Academy

In relation to this year’s 70th anniversary of Polish animation and 40th anniversary of creative work of Andrzej Pągowski, classes devoted to both anniversaries have been planned. The great legacy of Polish animation, the examples of which can be found for instance in the School Film Archive pack, will be presented by Jerzy Armata – a journalist and film critic. Under the supervision of the journalist and editor Magdalena Felis, the students will get to know how to “read” animation. The very Artist will be the guide around the “Andrzej Pągowski. Film posters. 40 years of creative work” exhibition. The poster will also be brought up during workshops developing the skills of analysis and interpretation of the visual medium. The pop-culture publicist Kaja Klimek will, in turn, talk about how film trailers shape the expectations and attitude of the viewer regarding a film work. The travel through the world of cinema will be supplemented with classes with Jagoda Murczyńska, the culture specialist, about the role of film costumes.

The School Film Archive in Gdynia means not only talks about films but also a chance to make the first steps on both sides of the camera. As part of the School Film Archive, the students will get to know what a stand-up is, what a prompter is used to, and how to host a television interview; the participants will try out the knowledge gained there in practice. Under the supervision of editors, operators and film editors, the youth will make their reports from the 42nd PFF, which will be published on the www.FilmotekaSzkolna.pl website and on the social media canals of the School Film Archives, the National Film Archive – Audiovisual Institute and the Festival.

For a fifth time, the best film of the Main Competition of the Polish Film Festival in Gdynia will be selected by the Young Jury, composed of the winners of the „Criticise!” competition for reviews and video-reviews: Agata Burdajewicz, Maria Dobosiewicz and Aniela Janowska. The teenage jurors will give out the award for the winner production during the Young Gala of the 42nd PFF. Thanks to the participation in the works of the Jury, the students will have the chance to experience an unusual adventure: to see the most recent productions of Polish Cinema, to get to know the Polish filmmakers, film stars, journalists and critics and to perfect their skills.

Organizers of the Film Academy of School Film Archive

The actions of the School Film Archive during the 42nd PFF in Gdynia are organized by the National Film Archive – the Audiovisual Institute with the suport of the Polish Film Institute. Partners: Pomeranian Film Foundation, the Media Zone, Film Museum in Lodz and the Museum of the City of Gdynia.

More information about the Film Academy of School Film Archive: