To make it before the next wave 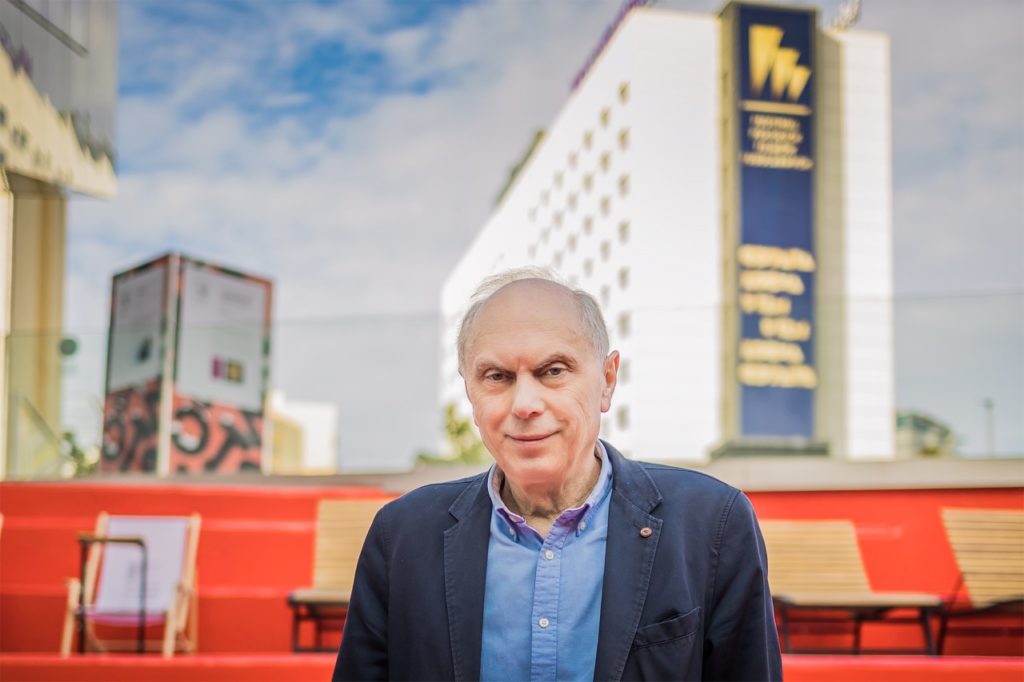 Using solutions from the time of pandemic, the advantage of the physical world over the virtual one, and the optimal formula of selection – we are talking with the director of the Polish Film Festival Leszek Kopeć.

Surely, the most important information regarding this year’s festival in Gdynia is – especially after the last year’s edition, which, due to the outbreak of a pandemic, took place online and in a very limited capacity – the festival is coming back to the physical world.

Leszek Kopeć: We are extremely happy, although we still have to remember about the current sanitary restrictions. We will not fill all seats in the audience to the maximum, we will also have to wear face masks and disinfect hands. However, this year’s festival has an exceptionally rich programme: there are not only three competitions, which generate 70 percent of interest from the participants and the viewers, but also the so-called side events. A lot of them focus on matters, which the film industry – taking advantage of meeting in a group of several thousand people, because this is the number we accredited this year – wants to discuss and confront with the reality. One of these matters is, for example, a change in digital distribution: part of the audience has moved to digital platforms, which, of course, makes digital platform distributors happy. Cinemas, however, are in a difficult position. The radical changes taking place concern also the structure and the way of production. This is why not only filmmakers, but also distributors and technical companies’ representatives, which deal with post-production, are hoping that they will manage to meet-up before the fourth wave of pandemics, which – let us hope – won’t arrive.

There will be a lot to talk about, because the film industry really has many challenges to face. Do Polish filmmakers have to fight for their viewers once again?

LK.: Among the industry representatives, especially the distribution industry, there’s a prevailing view, that the process of restoring the audience, which, in 2019, was breaking records in Polish cinemas – the turnout was 62 million viewers, which was largely thanks to Polish films – will take a year or two. We have to remember, that the pandemic has not ended yet, and we are still talking about a situation that is difficult and critical to a certain degree. Some of the producers, not wanting to wait for cinema distribution, decide to partner-up with digital platforms. Others divide the distribution of their productions among both the traditional cinema and watching films at home. I think that we will certainly have to prepare for the changes, both in the distribution itself, and in the film production. We will have to find resources and ways to make slightly cheaper, but also more competitive films. Films, which will not, at all costs, try to find 70 percent of their proceeds in the traditional cinema, but also in television and on the digital platforms. There is also a need for a new kind of promotion and looking after the young audiences, which, in fact, is realized on a large scale in the Gdynia Film Centre. We have thousands of visitors from elementary schools, who take part in film classes, but also many students, who enjoy a wide range of workshops. Our educational programmes have a great focus on bringing up the audience and getting them used to the fact that watching films in a traditional cinema is incomparably more valuable and provides deeper sensations than a tiny screen of an electronic device.

Like every year in Gdynia, this year there will not only be a meeting of the industry, but also the audience will meet with Polish films and their creators.

LK.: We have limitations, but they are not big: we can fill 75 percent of seats in the audience. We have provided 12 screening rooms in three facilities: in the Musical Theatre, in the Gdynia Film Centre, and in the Helios Cinema. We have prepared hundreds of screenings: we have extended the duration of screenings, replays, and replicas from early morning hours to late night hours. Apart from traditional, official screenings – with the participation of creators, accredited guests, and media – we have also organised additional screenings in the Musical Theatre. Each film taking part in the competition will be shown on the Large Scene twice, with the largest audience. At our disposal, we also have the reception and conference rooms of the Mercure Hotel in Gdynia. Similarly as two years ago, regular busses will run between the festival centre and the Helios Cinema, which is located in Centrum Riviera. Of course, you can also cover this distance by bicycle or an electric scooter.

Last year’s pandemic edition has certainly shown that you cannot transfer the atmosphere of Gdynia’s Festival online. Nevertheless, some online acquisitions will stay with us this year too.

LK.: We benefited from the pandemic in the sense that we have organised equipment, which allows to execute professional television productions – I am talking about the control room, equipment, adapted film studio. Because of this, benefiting from last year’s experiences, this year we can also realize a large part of the festival online. There, you will be able to watch films from the Short Film Competition and the Microbudget Films Competitions as replicas accompanying live screenings. You can also follow many side events: press conferences, which we have been streaming online for many years, meetings with creators, discussions, workshops, and debates. I hope that this way the number of viewers will grow to include people, who could not go to Gdynia, but want to be active participants of the Festival. However, it is my impression that, no matter how interesting the technical solutions we can enrich the content displayed and watched on the screens of laptops and smartphones with, they will not substitute the real world. This also concerns education and other areas of our everyday lives. Lack of real contact causes our social life to turn different, weird, incomplete. Especially in the case of our event, which has a difficult to define atmosphere. Atmosphere, which has also changed in recent years from that of a niche festival into an event with a rich programme, with a larger space, and an impressive number of viewers. Operating online just cannot compare to operating in real life.

The return of the role of an artistic director was one of the demands of the film industry, which two years ago demanded the reform of the Polish Film Festival in Gdynia. Do you think that after recent changes in the regulations, the Festival’s formula is optimal, or is it still a living and breathing organism, which will continue to change, reacting to the demands of the industry and the dynamic reality of the world of film?

LK.: I think that the current formula – developed in a very extensive consultation with filmmakers guilds – is probably optimal. Surplus of democracy and a situation where a vast group of a dozen or so people votes over the selection of films, results in different motivations clashing with each other. It is unknown, who oversees the selection, and why the vote was yes or no: who was the majority, who convinced who, whose likes and tastes had the greatest impact on the choices. It is also then, when the pure reviewer-worthy evaluation of artistic value of films ceases to matter in the process of selection. When this process is dominated by one person – even if they have a circle of advisors – they begin, to a large extent, to feel responsible and to mature to this responsibility. I noticed that the choices of Tomek Kolankiewicz, artistic director, are not entirely consistent with his film taste, so it seems to me that he considers the voices of the Selection Board. There is also the complementary package of four films added by the Organising Committee. We have a responsibility realise that we are not a festival with a strictly original formula. Therefore, it is worth taking into account a very wide range of artistic means, genres and cross-genre devices used even more often by the creators to make their films more appealing. We must take into consideration the richness and the diversity; we cannot be driven only by personal taste. I believe that this year such a solution worked great.

This interview is from the festival’s press magazine Gazeta Festiwalowa KLAPS. The entire issue can be downloaded HERE.