We know the winners of Nespresso Talents 2020 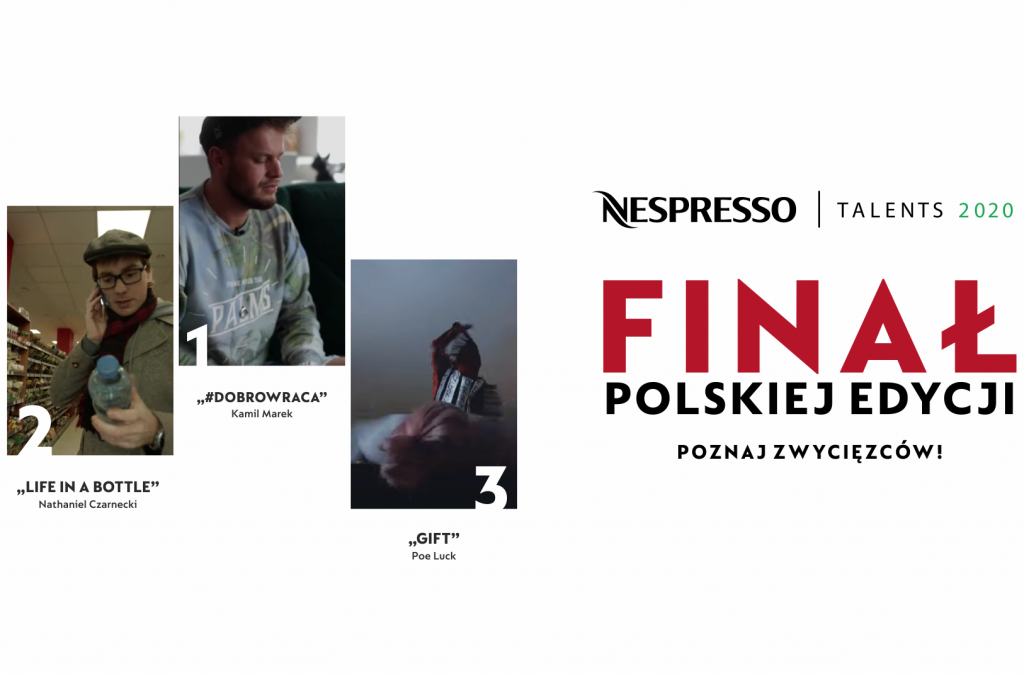 The final of the first Polish edition of the Nespresso Talents film competition took place on Friday, September 18. The jury consisting of Małgorzata Kożuchowska, Kinga Dębska, Anna Zoll and Łukasz Maciejewski announced the results during a virtual, emotional ceremony with the winners.

The winner was Kamil Marek with his film #dobrowraca (#goodreturns), second prize was awarded to “Life in a bottle” by Nathaniel Czarnecki, the film “Gift” by Poe Lucke got the third place. Additionally, the Audience Award went to the film “Seeds” by Kasper Davies. The winners of the competition will receive cash prizes and invitations to the Polish Film Festival in Gdynia in 2021.
The award ceremony can be viewed at Nespresso
Nespresso Talents is a film competition open to everyone. Participants interpret the topic by creating films of up to three minutes, shot in a vertical format. The fifth edition of the international Nespresso Talents film competition was held under the slogan Virtuous Circles. In total, 743 films from 47 countries were submitted to the competition. This year, the Polish edition of the competition was also held for the first time. From among the films sent, the Polish Jury qualified 11 titles for the shortlist, from which 3 winners were selected. The winners will receive cash prizes: EUR 1500 (first place), EUR 1000 (second place) and EUR 500 (third place) and invitations to the Polish Film Festival in Gdynia in 2021. During the grand finale, the competition jury summed up this year’s edition and shared their impressions about the winning films, thus justifying the verdict.

The winning film #dobrowraca is three minutes in which so much happens that it seems that we are watching a full-length documentary. The hero is the strength of the film. We believe him, we remember him, we sincerely cheer him on. On the other hand, the movie “Life in a bottle”, which took second place, is an excellent concept. A cinema that combines the theme of this year’s edition with great ingenuity and originality. Ecological cinema, committed (for a good cause), cinema which is not ignorant. Plus, the great acting role of Izabella Dudziak. The third place, that is the movie “Gift”, stays firmly in your memory. Rugged, stylistically heterogeneous, impossible to fit into any frame. One of the aesthetically most original proposals of this year’s edition.

We appreciated and decided to award the films that dealt with the subject of this year’s competition in an original, interesting and very personal way. Their strength is the so-called human story, full of emotions and honesty. The story of Kamil, who by helping a sick girl overcame his weaknesses, because “good returns”, “Gift”, which by causing a smile helps to deal with fears, and even the fate of a plastic bottle from the movie “Life in a bottle” is surprisingly close to us. These movies have power. We also appreciated the method of production, photos, editing, and the use of new techniques as in the case of the movie “Gift”. Sensitivity, imagination and real emotions were the reasons why these three films won.

What captivated me most in the best films was creativity, serenity and the truth emanating from them. The three awarded films describe our pandemic reality, show our world at a time when no longer fictional form has yet been created. They touch upon important topics in an original and authentic way. Fresh observations, a sense of humour, the lack of internal boundaries – these are the determinants of the awarded films. Bravo winners!

The film #dobrowraca touched me. He beautifully showed the value of helping others, and thus helping himself. The combination of gentleness and human strength. There are also interesting vertical shots and the topic of this year’s edition was well presented. “Life in a bottle”, in turn, is a film about a serious topic, the problem of today’s world in a light way. The movie “Gift”, on the other hand, is fun and makes good use of the possibility of vertical shooting.

As part of the first Polish edition of Nespresso Talents, Filmweb also held a vote for the Audience Award, which was won by the film “Seeds”, directed by Kasper Davies. Voting was very popular – in total, almost 5,000 people cast their votes. The creator of the winning film received an award from Nespresso: a coffee machine, a milk frother and a coffee set.

By working with filmmakers, Nespresso continues its commitment to raise socially important topics and make change for the better. It is worth adding that this year each film submitted to the competition equals ten new trees. Nespresso Talents supports the reforestation program implemented by the brand in partnership with PUR Projet.

For more information on the Nespresso Talents competition, please visit: