From audio series to the world of film 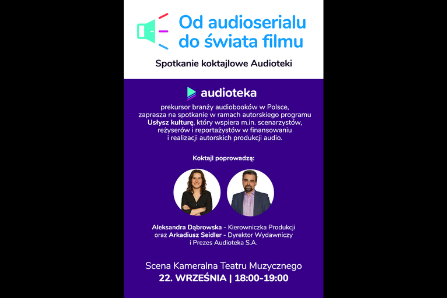 Usłysz kulturę is Audioteka’s original programme whose aim is to support e.g. screenwriters, directors and reporters in financing and creating their own audio productions. The first edition of Usłysz kulturę enjoyed great popularity. Within the framework of the programme, in thirteen months four hundred and eighteen artists submitted their applications. Twenty-one original scripts were chosen and nine productions based on them are available in Audioteka’s app. Among them there also is the first audio musical in Poland, Jestem kim chcesz directed by Bartek Szpak and with the participation of Roma Musical Theater, Lodowa przełęcz – a Zakopane audio series starring Witkacy Theatre actors, Adam Śmiałek’s podcast Towary modne and Ewa Studińska’s audio-documentary Miła robótka. This year, every few months, the organisers are going to announce a CALL FOR PROPOSALS, meaning there is a need for ideas in a given genre or on a particular topic. All screenplays and production ideas submitted in response to the CALL FOR PROPOSALS will be read and evaluated in collaboration with StoryLab Pro, and a maximum of ten ideas will be awarded with a meeting with a script doctor in order to perfect them. The best ones will be offered to work with us. Audioteka supports screenwriters also by getting involved in additional initiatives. This year Audioteka became a partner of the 5th edition of Script Wars – Mazovia Script Competition, in which it funded money prizes for the winners and a possible invitation for chosen winners or finalists to negotiate in order to sign a contract on producing an audio version based on the winning script.

During the 46th Polish Film Festival in Gdynia, as part of the Usłysz kulturę programme, Audioteka is going to hold a  workshop Od audioserialu do świata filmu (From audio series to the world of film). The meeting will be hosted by Aleksandra Dąbrowska – Production Manager, and Arkadiusz Seidler – Publishing Director and Board Member. We invite all interested parties to the workshop which will take place in the Musical Theatre, Chamber Stage, 22nd September 2021, 6:00 p.m. – 7:00 p.m.