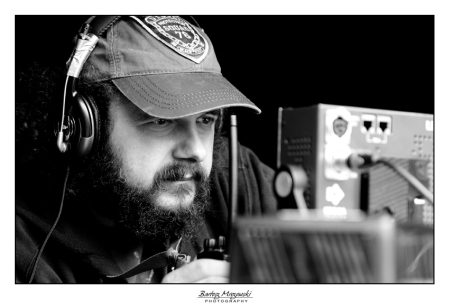 Born 1969. Debuted in the feature film “The Simple Story About Love”. Graduate of the Wrocław brach of the Ludwik Solski State Drama School in Cracow, a member of Polish Film Academy and a vocalist in a rock band “Dr Misio”. He gained acting experience on the sets of Wojtek Smarzowski’s films “The Wedding” and “The Dark House”. As a theatre actor, he debuted in “Shopping and fucking” at the Variety Theatre Warsaw. Today, he can be seen in the staging of “JA” at the IMKA Theatre. He directed several theatrical plays, among many, “Krótkie jest życie krótkie…”, “Kalina”, “Biblia /w nieco skróconej wersji/”, “Stowarzyszenie Osób Mówiących Nie Na Temat”, „Kobieta jaskiniowa”, “Monty Python’s Circus” and “Goło wesoło”. Screenwriter, the author of theatrical and radio plays, musicals and radio dramas. He wrote and directed the musical about Jim Morrison and The Doors – “Rider on the Storm” on stage of the Rampa Theatre for 11 years. In 2008, he directed “Striptizo ereliai” in Vilnius. His latest screnplay “Home Games” entered the finals of Hartley-Merrill Contest 2010.