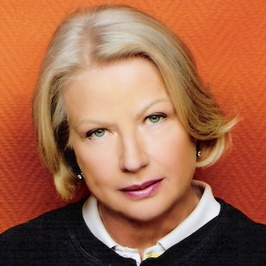 She graduated from the National Academy of Dramatic Art in Warsaw. Immediately after graduating she joined the STS theatre where in 1972 she played the role of Sexy in the first staging of Janusz Głowacki’s Adultery Punished. Between the years 1973–1985 she played at the National Theatre in Warsaw and on the stage of Teatr Mały under the artistic supervision of Adam Hanuszkiwiecz. Her major parts include: Fredro’s Pierwsza lepsza, the Bride in The Wedding, Goplana in Słowacki’s Balladyna, Helena in Garczyński’s Wacława dzieje, Telimena in Mickiewicz’s Pan Tadeusz. She played the main part of Rosalind in Shakespeare’s As You Like It directed by Minc. She has also performed in privately-owned theatres, she has played numerous parts for children and young adults in fairy-tales. Before she performed on a theatre stage, she appeared in Janusz Zaorski’s film To Run Away As Near As Possible, and later starred alongside Marian Opania in the same director’s film, Promotion. She played in over seventy films, the most significant ones including: The Wedding, The Promised Land, The Shadow Line, Man of Iron, Holy Week, The Possessed – all of them directed by Andrzej Wajda.