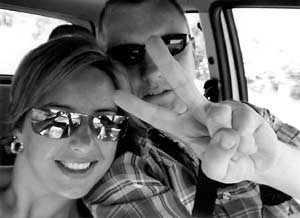 Born thirty years ago in April, that is, in the middle of April. To be more specific, it was the second half of April. Exactly 16th April (just like Charles Chaplin). In 1990, together with his friends from Osiedle Piastowskie in Zielona Góra, they created “Sky Piastowskie” film group. The company produced 13 feature films, including “That Life Makes Sense” – probably the cheapest (1000$) picture in the world distributed in cinemas (Best Film). Lipiec breaks yet another record: for years he’s been studying Editing at the Lodz Film School and he likes it so much that he wants to become the longest studying eternal student. Lipiec makes a living by producing clips and advertisements but he wouldn’t turn down filming fun weddings that tend to be fun by definition. He’s been living in Zielona Góra forever and enjoys flying planes.