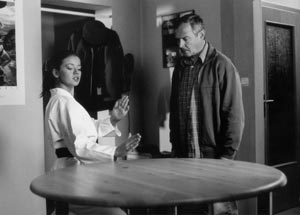 Day of the Wacko

44-year-old Adaś Miauczyński is a frustrated member of intelligentsia and a Polish teacher earning less than 800 zlotys per hand. He’s divorced, alone and loves his teenage son taken care of by his ex-wife. Adaś wakes up and lies half-asleep too scared to move. He’s afraid of the new day, tortured by the tedious repetitiveness of regular activities and the necessity to interact with the people he hates. In order not to eat alone, Adaś eats with a TV and hurts watching conflicts in Sejm for as far as his patriotism is concerned, he has a huge heart but the life is killing it. Intimidated by commercials everywhere he goes, Adaś takes pills for the aversion to live, for getting old and for his brain. His loneliness results in a habit of leading an internal monologue.