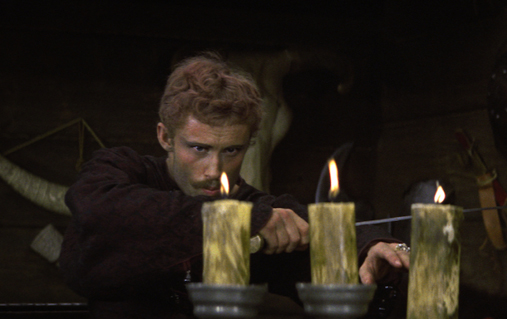 1655. A bannaret of Orsha, Andrzej Kmicic, comes to Wodokty to introduce himself to the fiancée meant for him – Oleńka Billewiczówna. The young couple fall in love with each other at first sight. However, the proud and impulsive nature of Kmicic gets him into trouble. At the same time, Swedes invade the Polish-Lithuanian Commonwealth. In order to expiate his guilt and regain the heart of his beloved one, Kmicic decides to fully devote himself to battling against the enemy.

The full version of the film has been digitized and digitally reconstructed by Magyar Filmlabor and Studio Produkcyjne Orka within the project of the National Film Archive’s Digital Repository, thanks to the support of the Polish Film Institute and the Ministry of Culture and National Heritage as well as with the co-participation of TVN S.A. All the works were performed under the supervision of Jerzy Hoffman and professor Jerzy Wójcik. The reconstructed film has become the basis of a separate artistic project. Under the supervision of the director, the editor Marcin Kot Bastkowski created a new, shortened version of the film – “Deluge Redivivus”.

The premiere of “Deluge Redivivus”, which will open this year’s Gdynia Film Festival, has been taken under the patronage of the President of the Republic of Poland, Bronisław Komorowski.

Separate invitations to the premiere screening of “Deluge Redivivus” apply.