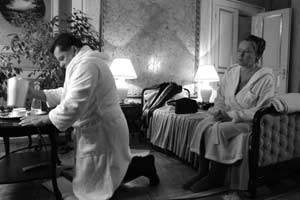 Part of the TV series “Święta polskie”. Bogdan, a shy middle-aged man, picks Marta – a candidate number three in a TV program “Blind Date”. Though the host does his best to relax the atmosphere, the participants are stiff and tense, especially the woman who seems to be there accidentally. The couple wins the weekend in a luxurious hotel by a lake. Both of them dream about finding someone, but it seems it’s not one another. They couldn’t be more different: Marta is a library manager and a former opposition activist, Bogdan – a professional soldier. It turns out that Jan Tomaszek, a legendary poet of the 1980s, stays at the same hotel. In her excitement, Marta ignores Bogdan and follows Jan everywhere. She’s willing to jump at a chance and organize May 3rd celebrations. Bogdan gets furious. In order to annoy her, he prepares the celebration of May 1st. Other hotel guests divide into the two camps. Eventually, Bogdan and Marta exchange phone numbers but it seems that their relationship has no future. Well, life will tell…