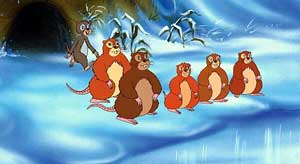 Computer animation. In the wintertime, a muskrat family and rat Archibald live in the Wicker Bay. One evening, Archibald pays a visit to his friends in their cozy burrow. At dinner, he tells them a dramatic story from the time when he used to live in a city. There, he had a friend named Hubert with whom he worked in a supermarket. When all the people left, Archibald and Hubert were tasting the products. Obviously, for the clients’ sake so they wouldn’t buy stale food. One night, Hubert took a bite of the special rat treat. Despite Archibald’s warnings, he ate rat poison. Archibald escorted his sick friend to a cellar under a pharmacy where rat Horacy lead his medical practice. When he tried to get back to work, he realized in shock that the entrances to the cellar and to the supermarket had been bricked up.