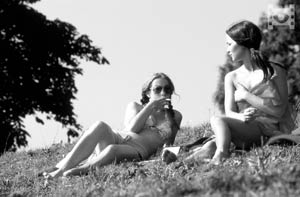 My Summer of Love

Mona has just got hold of a brilliant moped that only cost a tenner. No engine but still dirt-cheap. She lives with her brother, Phil, who used to run a pub before he found God and poured away all the booze. Tamsin is rich, spoilt and trying to live a life of seductive decadence. Tamsin and Mona meet on the moors, above their quiet Yorkshire village and begin an intense, unlikely friendship. Tamsin is tragic and fantastical, Mona, rough and witty. Tamsin is charmed and Mona is hooked. Tamsin and Mona want to escape their lives but Phil wants to save them and save everybody else. Mona wants the old, dangerous, Phil back; the brother that she loved. Tamsin wants to see what it takes to break him. More and more their lives intertwine. The atmosphere is buzzing with emotions and a delicate, sensual eroticism… (based on the materials from the distributor).