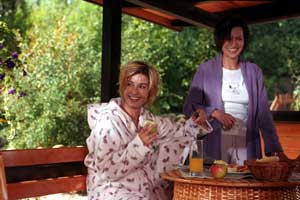 Judyta (Danuta Stenka), a wife of a successful businessman and a mother a teenage daughter, lives in Warsaw. Devoted entirely to her family, she’s focused on housekeeping and taking care of Tosia (Joanna Jabłczyńska) who’s entering the period of youthful rebellion. Judyta doesn’t have a full time job but occasionally publishes in a woman magazine where she answers the letters from readers. Busy with work and housekeeping, she ignores the changes in her husband’s behavior. One day, Tomasz (Jan Frycz) declares he has a pregnant lover and needs to leave his wife. Surprised Judyta easily gives him a divorce. Her decision shocks her parents (Krzysztof Kowalewski and Marta Lipińska). Though not really sure if her decision was good, they do the same and leave each other after a long marriage. Tomasz expects Judyta and Tosia to leave the apartment he promised them and offers a small neglected studio flat. Following the advice of her best friend Ula (Joanna Brodzik), Judyta claims money instead and buys a plot near Warsaw. With the help of a construction crew of highlanders, she builds a little house living at her friends and struggling to find the money for its completion. At a garden party celebrating the new home, she’s introduced to Adam (Artur Żmijewski), a sociologist co-working with the magazine. Soon, they start to flirt and getting closer. Judyta falls in love with Adam and he loves her back. Tosia, who struggles with love herself, accepts her mother’s new partner. In fact, there is only one condition for Adam to stay for good in a little house: he has to respect Judyta’s privacy and never touch her laptop. One day, her broken ex-husband Tomasz knocks at the door. It turns out that the child that lead to their divorce was not his. He would like to be with her again surprised how well she is after he left her. In the meantime, Judyta and Adam have a fight. She leaves him but is not sure if it was a good idea.

Based on the promotional materials.