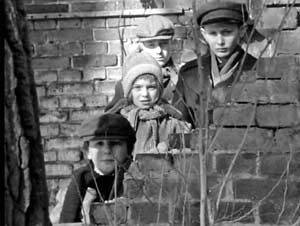 A 10-year-old boy pulling a metal sledge and nothing else arrives alone to a small town. The first thing he sees in the new place is a group of local children playing in snow. The boy decides to take a rest after a long night trip. He sits on a sledge, turns his face towards the sun and falls asleep. Idyllic atmosphere vanishes with a frozen snowball hitting the face of a sleeping child. “Our Street” is a tragic story about a lonely child powerless against the aggression and resentment of a little community during the World War II. We observe the town and its adult citizens from the perspective of children who reflect their moods. These young people resemble predators more and more common also on the modern streets.