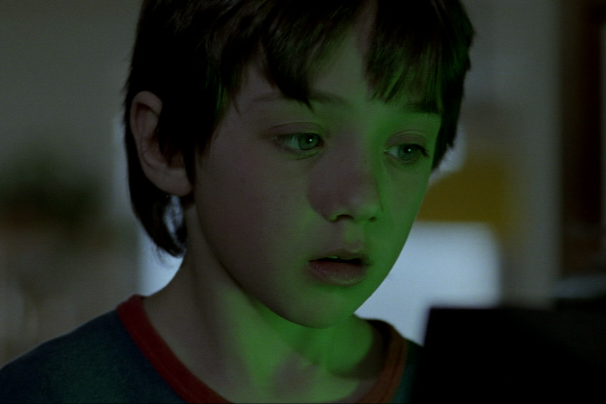 Krzysztof is a middle-aged man, his son Pawel is about eleven. The mother is away from home: she has gone abroad to earn some money or perhaps just to visit her friends. Normal life goes on. The boy goes to school and is soft on a class¬-mate; together with his father, he wins,a game of chess against the woman champion of Poland; when Krzysztof -lectures’ at the University in the afternoon, he always takes his son with him. In the morning, father and son take exercise together. Then, at breakfast, they have time enough for a little talk. When Pawel happens to dig up the skating boots he was to get for Christmas, his father just gives them to him smiling although it is still quite a long time till the Christmas Eve. The house is full of computers Krzysztof uses in his work. He wonders about the possibility of computers accumulating the whole of the knowledge about language. The boy solves his maths problems with the help of computers and does a lot of programming to be able to know what his mother is doing at any moment of the day, the seven hours of difference in time taken into account. The computer is also provided with all the necessary data when father and son want to calculate the thickness of ice-sheet on a nearby lake. “You can skate”, the computer tells the boy, Krzysztof nodding assent too. But at night he himself goes to the frozen lake – the computer was right. Paweł can talk of everything with his father. He can cry rememberinga dead dog, and tell his father about his calf love – but when he wants to ask about the soul and God, he speaks with his fathers sister Irena. One day, an ink bottle suddenly cracks on Krzysztof s desk. A presentiment of tragedy makes him freeze. He hears a cry, “The ice broke on the lake!”. Pawel is not at home. Krzysztof joins the crowd at the lake. There are firemen, drivers, the police. A dead child -s body is fished out of the lake, followed by another one. Irena, her head bent, touches her brothers arm. Krzysztof is now back at home. A green glimmer on his face – and the computer announces calmly, “I -m ready”. In a sudden protest, Krzysztof runs into a church that is being raised in the neighbourhood. He destroys the makeshift altar with one violent stroke. An overturned candle besmears the face of Virgin Mary in the painting with stearyn. Krzysztof dips his fingers in the stoup – but the holy water is frozen. He touches his face with a lump of ice which starts melting and forms drops of water running down his cheek.