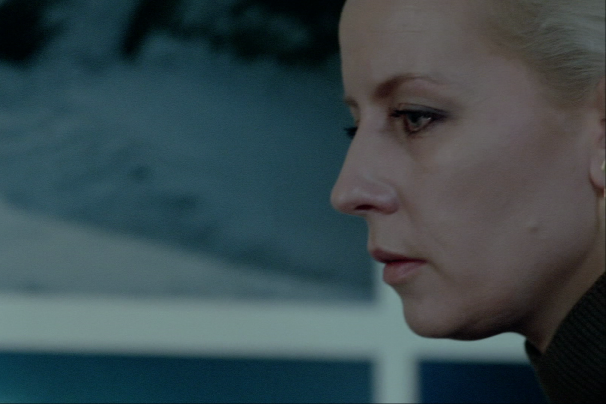 Watching some of a hospital ward head’s morning duties, it is easy to guess that they constitute his everyday routine. He is an old and lonely man who has arranged his life in a way never to disturb anybody. He closes his eyes for a short while and holds on to the bathtub rim when he pours hot water out of the too heavy pots. The viewer learns the reasons of his loneliness and his past history from a story the old doctor tells his charwoman: like a series, an episode every week. But one day, somebody turns up to disturb that routine. Dorota, a young woman who lives in the same giant tenement house, comes to ask about her seriously ill husband who is patient on the old doctor s ward. But the ward head refuses to talk to her. “I receive the families on Wednesday afternoons”, he says. Hard faced, Dorota strips a potted plant in her flat of all its leaves. On his arrival at the hospital, the ward head notices her sitting at her husband s bed. “Will he live?”, she asks. “I don-t know”, answers the doctor. Dorota has made up her mind. As soon as the ward head has come home, she again comes to his flat. He tries to reason with her: he knows too much to pass judgement. He saw in his lifetime people who ought to have died but lived on instead, and others who died without an apparent cause. But Dorota does not care about such self-evident truths. She is pregnant by another man. This is her last chance, she never could get pregnant before. But she cannot have the baby if her husband is going to live. But the doctor gives her no answer.She makes an appointment with a gynaecologist, planning an abortion. Once again, she bends over her pale, unconscious husband. “I love you”, she whispers, and goes straight to the ward head’s office. “You refused to pass judgement in my husband -s case”, she says. “But I don-t want you to feel no remorse. I am having an abortion in an hour”. The ward head has just studied the tests and radiographs of the patient. He turns slowly to face Dorota. “Don-t. He will die.”Dorota is a violinist: she gives a concert in the Philharmonic. The ward head, his eyes closed, is in the house listening to her performance. Dorota sends him a smile.Some time has passed and Dorota’s husband, still rather weak, visits the ward head in the latter -s office during a night duty. The patient wants to express his gratitude, but the doctor knows only too well there is nothing to be grateful for this time. “We-re expecting a baby”,Dorota s husband says. “Do you know how wonderful it is, to have a baby?”. “I do”, the ward head answers.