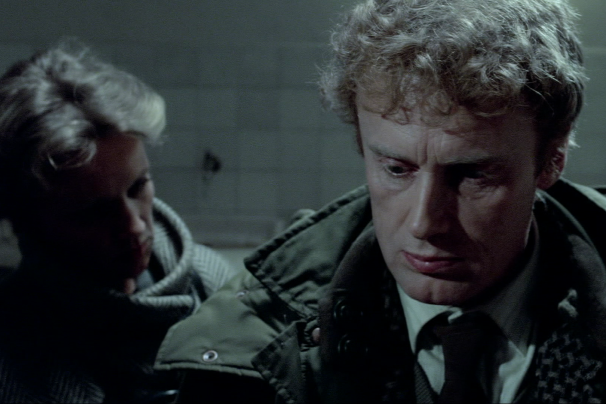 The Christmas Eve – a happy day to be spent with one s family. Janusz, his wife and two small children go to a night service and sing along with the crowd that has gathered in the church. A sullen woman watches him with sharp, evil eyes. She is lonely – this fact is only too apparent. She keeps staring at Janusz until he feels her eyes on himself and turns to look at her. Immediately he hides behind the crowd.Back home, Janusz disconnects the phone. Christmas greetings, present, champagne. Suddenly, the doorbell can be heard. Ewa, the sullen woman who had been in the church, is now waiting outside. They exchange a few words and we soon guess the couple had an affair several years ago, probably a short and violent passion which ended as quickly as it started. Now, Ewa needs Janusz’s help: her husband has vanished, went out shopping and failed to returned. “But-it’s Christmas Eve-“, Janusz protests. “Sorry for disturbing you”, Ewa whispers, tears in her eyes, and turns to go away. Janusz makes up his mind.He tells a lie to his wife: somebody -s car has been stolen. But he cannot deceive her – a woman always know when her husband is lying. Janusz drives Ewa through the city which is snow covered and full of Christmas lanterns. They visit all hospitals, emergency departments, the police, the sobering-up station. Gradually Janusz and the viewers come to notice something false in Ewa s story. The details just do not agree with one another. Ewa is in turns too meek and provocative. She complains of Janusz having broken their relationship. “You’ve landed very well, haven -t you?”, she says. Having noticed Janusz is fed up with the situation, she causes a minor accident of the car, only to apologize for it and delicately to wipe blood off Janusz -s forehead. “Take me to the railway station”, she asks him.Obviously, Ewa s husband is not there, either. But it is now three minutes past seven in the morning. “I lied to you”, Ewa admits. “He left me three years ago and has another woman in another city.” What Janusz cannot understand is why Ewa had to do what she did. “It is so hard to spend a night all alone”, he hears the explanation. “I said to myself, if I manage to keep you by my side till seven a.m., my life will be normal afterwards.” “What if you had failed”, Janusz asks her. Ewa just plays for a while with a small pink tablet and then crushes it with her heel.Janusz comes home at dawn. His wife is asleep in the armchair: she has been waiting. “Are you going to spend evenings away from home again?”, she asks him. “No. I-m not”, Janusz answers