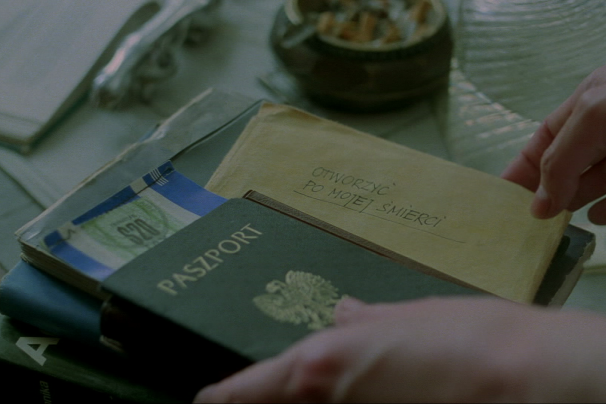 Anka is a pretty and lively girl. A jug full of water in her hand, she steals up to a sleeping man, planning to douse him according to an Easter Monday tradition. She hesitates as she notices a yellow envelope on the table, next to a passport and air ticket. The girl must have seen that envelope before; now, she grows pensive for a moment, holding it. But soon everything is back to normal, and it is now time for the man, wet all over, to take his revenge. Dousing Anka who crouches in the bathtub, he watches her for a moment with a strange curiosity as the now wet night-gown clings to the girl -s body.Before Anka and the man reach the airport, it becomes apparent that they are father and daughter. Michał is going away for some time, and Anka is seeing him off. Already on his way to the plane, Michał remembers something: he forgot to pay the rent. Anka leans over the railing. “Where are the receipts? “In the drawer”, the father answers.So they are. But when Anka opens the drawer, she finds something else, too: the yellow envelope.It takes her some time to decide what to do. A sign in an architect s steady handwriting says, “To be opened after my death”. Anka looks at the envelope against the light, and finally opens it with a pair of scissors. There is another envelope inside, a withe one. Anka deciphers the delicate letters in a feminine handwriting: “For my daughter Anna”. She closes her eyes for a moment before she takes another look at the handwriting. There is an old suitcase in the cellar which contains a sachet with a small mirror, a photo of Gerard Philipe on the reverse, and a bottle of scent, all the fragrance gone long since. Anka finds also a snapshot: two young girls and two men, and some envelopes exactly like the one which contained the letter from her mother, with edges yellowed with age. Anka imitates the handwriting with care, letter after letter: “For my daughter Anna”…At the airport, she fails to wait for Michał at their usual meeting place. Michał only finds her after a while. Anka does not respond to his hello and kiss. “What happend?”, the father asks. Instead of answering him, Anka quotes her mother -s long letter which she now knows by heart. “My dear little girl, I have an important thing to tell you. Michał is not your father…” and so on. As shown by the letter, Anka’s mother realized she was going to die. Michał listens, surprised; when Anka break off, he slaps her face and walks away.Anka visits the mother of her boyfriend. She explains nothing but states she is quite willing to marry the young man straight away, be it tomorrow. In the meantime, Michał gives vent to his anger kicking a door, and then watches the cracking glass pane, his features distorted.They do meet after all. Anka wants to know why Michał never told her about the past. Michał asks why she opened the letter. “Because you wanted me to”, she says. She is probably right: Michał just bends his head. They talk for a long time. Anka had an inkling of the contents of her mother’s letter she quoted at the airport: she always loved Michał but that love started to change a few years ago: it was not her father she loved but a man.Michał has to admit he was jealous of Anka beyond endurance. Late at night, Anka takes her blouse off. “Do you want to touch my body?”, she asks. Michał wraps a sweater around her shoulders.In the morning, Anka wakes up to see the flat is empty, her father is not there. She notices him through the window, walking away with a bag in his hand. She runs after him, dressed in nothing but her night¬-gown. “I lied to you”, she says. “I lied, I forged that letter…” They look at each other. “Father, what did Mother write in her letter?” “I don’t know”. “Where are you going?” “To get milk for breakfast”, the father answers.Back at home, they burn the mother -s genuine letter. A scrap of paper is left of it which Anka straightens and tries to decipher. The only words she still can read are, “My dear little girl, I want to tell you¬ -Michał-” The rest of it has been burnt.