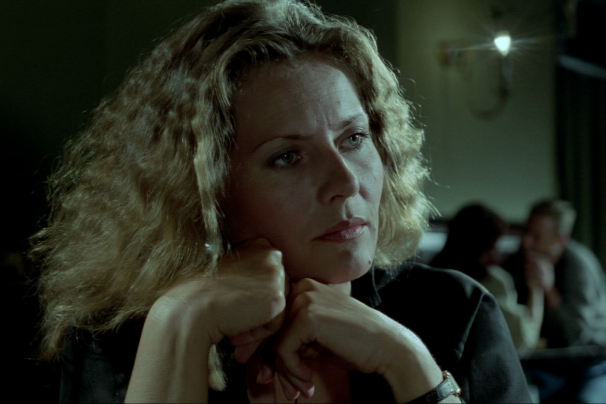 Tomek is a boy of nineteen, Magda – a woman of thirty. She does not even know of Tomek’s existence. But all the time he loves her desperately. They live across the street. Every evening, Tomek adjusts a field glass. Magda lives a free, light and careless life.As a succession of men appear in her flat, Tomek lowers the field glass. No doubt such scenes excited him before – but he was not in love with her then. Today, he just cannot look.Obviously, he tries to come closer to her. He daren’t- but at the same time wants to. He takes a job as a milkman just to hear her asking at dawn through the locked door, “Who is it” and to answer, “The milkman”. He dials her number and keeps silent when she lifts the receiver. He interrupts her love affairs, unable to stand the men who take her to bed at the first opportunity. Working at the post-office, he forges notifica¬tions to make her visit his counter. He steals letters that come for her from abroad. He hardly seems a nice boy, his naive and painful love considered.At last, Tomek and Magda meet. “I’ve been watching you through the window”, he says. Magda cannot understand why. “Because I love you”. Magda is an experienced woman who knows life is easier without love. Thus she says, “There is no such thing as love”.But she is intrigued by that boy who knows nearly everything about her. But when Tomek tries what all her former guests did to her so easily in bed, he fails. To Magda, everything is very simple – no problem at all.But to him, there is a problem there and it has to be solved. So he takes a blade out of his safety razor – soon warm water in the wash¬basin turns red.This time it is Magda who finds an old opera-glass in her wardrobe and tries to see what is going on in the flat across the street. Her intuition tells her she has lost a chance, spoiled something that was important. Naturally, she knows nothing about the blade and the red water in the basin. She keeps guard in the window, the opera-glass in hand; she jumps out of bed at the noise of milk bottles in the hall at dawn; she visits the post-office to find Tomek’s counter closed. When he returns to work at last, both wrists swathed in bandages, she comes up to his counter and they look at each other for a long time. Magda smiles softly – it is a test.”I’m not watching you anymore, Madam”, Tomek says unable to return her smile.