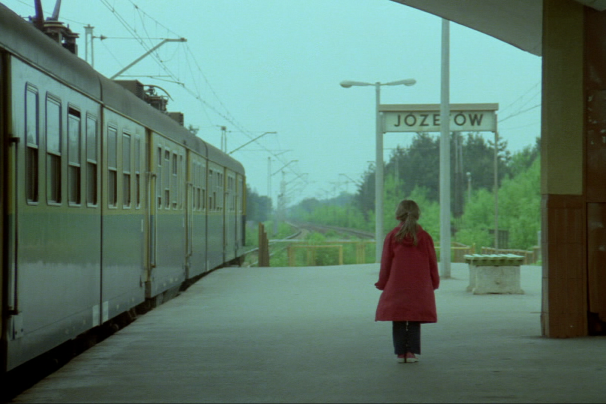 A girl of five screams at night in her dream, haunted by some unknown and adult terror. Two women bend over her, of which only the older one is able to soothe the child. The younger woman stops her ears in the hall not to hear the song which has already soothed the girl: “Mummy’s with you, dear.”The older woman, Ewa, is the mother of the younger one, Majka. There is a father, too, but he does not matter in the story. Stefan builds an organ in his small room.Majka is expelled from the university although she could easily prevent it. She applies for a passport to go to Canada. There is a deter¬mination in her actions – as if she were closing a period in her life.The little Ania is having a very good time at a puppet theatre. When all children are allowed to run up to the stage, Ewa lets Ania join them. But while the other children soon return to their parents, Ania is now¬here to be found.Majka takes Ania along various passages backstage. The girl still treats it as a continuance of the game.In despair, Ewa searches the now nearly empty house.Majka and Ania are together on a suburban train. They get off and find an old merry-go-round in a meadow. Majka sets it in motion and watches the happy Ania approach her on a white horse. “You’ve kidnapped me, haven t you?”, Ania asks Majka.Majka stops the merry-go-round. “Yes, I have”, she admits. “You see, I I’m your real mummy”.Wojtek lives in a wooden hut in the suburbs. When Majka turns up with Ania, he takes a long look at the child. “Is it her?”, he asks. “Yes”, Majka answers. Wojtek is Ania’s father. He has never seen her yet.When they first met, Majka was a secondary school student, Wojtek a young Polish teacher, and Ewa – the head mistress of that same school. When after some time Ewa happened to see Majka in the bathroom, with bandages wrapped tight across her belly to make it seem smaller, it was much too late to carry out an abortion and there was a scandal in the air. To prevent it, Ewa took Majka away to a distant village where the girl gave birth to a daughter. The child was registered as Ewa’s. Thus Ewa was a grandmother and at the same time Ania’s official mother. Majka had a younger sister who was really her daughter. Several years long, Majka put up with this situation. But one day she realized Ania was her own child, and wanted to have her to herself. In the meantime, however, Ewa came to love Ania passionately so that no solution couldbe found. So Majka kidnapped her own child and now looked for Wojtek’s help.Wojtek is not a teacher anymore: his house is now full of teddy bears which he stuffs and sews eyes and noses on for a living. He now watches Ania falling asleep and waking up, experiences Majka -s fits of love and hysteria – the entire intricate system of emotions which he thought he would never be involved in. In the middle of the night, Majka realizes Wojtek’s house will never become her own. Again, she wakes her daughter up and takes another flight. She calls her mother on the phone to blackmail her.A searching party of two cars sets off, Stefan a Ewa’s and Wojtek’s. Wojtek jumps out of his car having noticed a teddy bear on a riverbank. Haunted by d foreboding of evil, he goes farther into the water. But it is Ewa who finally finds Majka and the child fast asleep on a folding bed in a ticket-collector -s booth at a small station. Majka jumps on to an outgoing train. Ania tears herself free from Ewa’s arms and starts running along the platform. “Come back, my daughter”, cries Ewa, and nobody knows whom she means: Majka going away on the train or Ania who is standing at the end of the platform. None of them can even hear Ewa’s words.