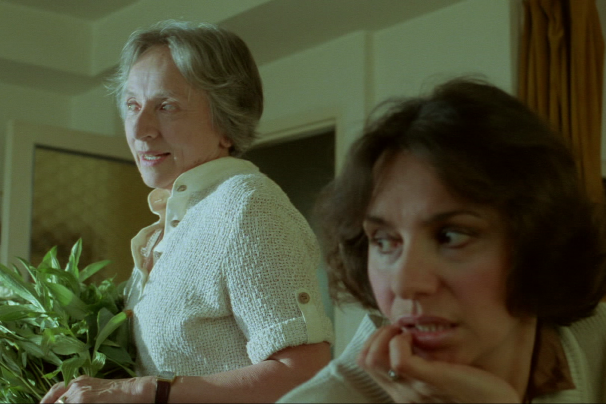 Few persons like Zofia can be found nowadays. Modest, dignified and at the same time kind, she requires more of herself than of others; she is broad-minded and intelligent.. She is professor of ethics at a university. Have works have been translated into many languages and published abroad,.. in America among others. Her lectures and classes are popular with the students. Also foreign guests attend them quite often, interested in her research methods. She demands little of life: she has a small flat, an old and nearly dilapidated car, and a briefcase she mends herself. But even in this perfectly harmonious life, a stain can be found. Sometimes, Zofia would grow pensive and stare into space with unseeing eyes, nodding her head slightly. There is also a mystery: an empty rooms where she arranges fresh flowers every day. The mystery will soon be unravelled: the room once belonged to her son who is “far, far away” as she will say later on. The stain or split in her life is the subject matter of the film.When we meet Zofia, a new would-be student applies to be allowed to take part in the classes. It is a young woman from America. It soon appears that Zofia knows Elżbieta – they met in New York where Elżbieta translated Zofia’s works. She descends from Poland. Zofia’s class concerns the “moral inferno”. The students tell stories where the heroes find themselves in extremely difficult situations: all the possible solutions are bad or at least difficult, and all of them arouse moral doubts. Next, the class analyses the heroes conduct, motives and the resulting effects. All participants, guests as well as students, enjoy equal rights at the seminar, and Elżbieta decides to speak when Zofia says while commenting upon an event that “the life of a child matters most whatever the circumstances. “Elżbieta’s story concerns the days of German occupation of Poland. A small Jewish girl whose parents died in the ghetto is looking for shelter. Her guardians take her to a young Catholic married couple who promised to help with baptism, the certificate of baptism being indispensable in those conditions to save the child. Everything has been arranged but the couple break their promise at the last moment and refuse to help. The child has practically no chances for survival. Elżbieta tells her story in detail, looking straight into Zofia’s face.Late at night, long after the class has ended, Elżbieta is waiting for Zofia who comes up to her slowly. “So it’s you”, she says. “Yes”. “And you re alive”, Zofia whispers. We know now Elżbieta’s story told about them both: it was Zofia who sentenced Elżbieta to death many years ago, but Elżbieta managed to survive. Zofia’s whole life, who she is and what she does is probably determined by the decision she took that night during the war, by remorse and attempts and redemption. Today, forty-five• years after that night, the two women certainly have a lot to tell to each other.