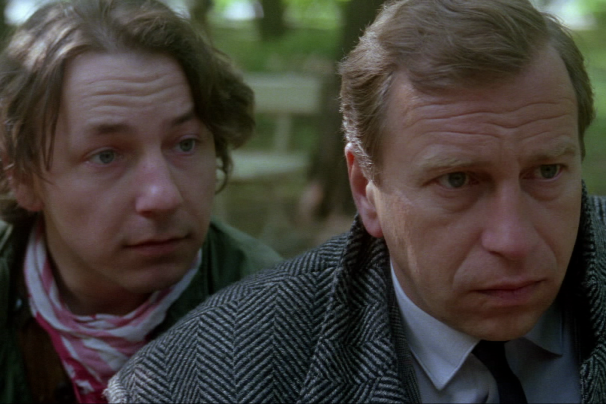 Artur is the younger of two brothers. As he screams the text of a pop song into the microphone, the audience raise their arms above their heads, shaking to the violent rhythm. Jerzy is the elder brother: as he elbows his way through the crowd towards the platform, dressed in a smart coat, we notice the two brothers have nothing in common.Their father has died. They had no emotional contacts with him since a long time. At the funeral, Jerzy gives his brother a reprimanding prod – but Artur, oblivious of the circumstances, listens to his favourite music played on a Walkman.The father s flat is tiny, just one small room. It is full of metal chests and safety devices, and a loud alarm bell starts ringing at the moment the front door is opened. The father was a stamp collector: the sons now dig in all the stamps helplessly. They know nothing about their father s hobby: they have never taken any interest in it. One thing is clear: the collection has to be sold. They might perhaps get enough money for it to make it possible for Jerzy to buy himself a new refrigerator; Artur is sure to squander his share away.One of the albums under his arm, Artur goes to a stamp collecting market. But the first collector to take a look at the album shakes his head. “This is just a fragment of a collection”, he says. “You can have all of it”, Artur answers. But the collector takes Artur to the President of the club, who wishes to meet both brother in their late father’s flat. Having arrived, he opens a random album, and points to the separate stamps. “This one will buy you a. good car. Those two are enough for a flat…” The brothers look at each other. Hundreds, thousands of stamps – a fortune. “You won-t find a buyer here in Poland”, the President tells them. “No one has enough money.”Artur moves into his late father -s tiny flat. The brothers have strong bars installed in the windows and buy a big dog trained to guard the flat. One night, coming back home, Artur notices light on in the window. He pulls a young tree out of the ground and runs into the flat armed with a makeshift club. Jerzy looks up at him from the albums and father’s notes he has been studying. Artur comes to a dead stop, the club in his hand. “I’ve been looking trough them”, Jerzy says. They both notice there is some more to stamps than just money. “I forgot I ever had any troubles”. Jerzy states at dawn, after still another night spent with Artur over the stamps. The brothers become very close to each other.They are entirely lost in stamps. Artur gives only a few concerts and refuses to accompany his ensemble on an attractive tour. No wonderJerzy s wife cannot understand the sudden change in her husband’s charac¬ter: it happens more and more often that Jerzy stays for the night with Artur in their late father -s flat. When it turns out the only way to acquire a stamp needed to complete the only series in Poland is to pay for it with a living kidney, taken out of somebody who has the same blood group as Jerzy, he hesitates for a moment only.After the operation, Artur stays at his brother -s bed. The nurse knows him at once as the leader of a pop group, and they have a nice time together on a narrow bed in the duty room while Jerzy is being operated on.They do get a missing stamp but they are in for an unpleasant surprise: the flat has been burgled during the night of the operation: the bars cut with a blowpipe, the alarm disconnected, the dog locked in the bathroom. The brothers cast each other a suspicious glance. They both think, “This couldn’t’ have been a coincidence”. They part after a violent quarrel. Soon they will both go to the police to tell about their suspicions: two brothers informing on each other. The lieutenant in charge of the casejust repeats twice the same words, “Thank you, sir, you’ve helped us a lot”, and meditates over this mutual denunciation.Meanwhile the brothers happen to meet unexpectedly: It appears they both, acting quite independently, spent their last pennies to buy some cheap stamps at the post office. Now, they bend over the table to inspect them.